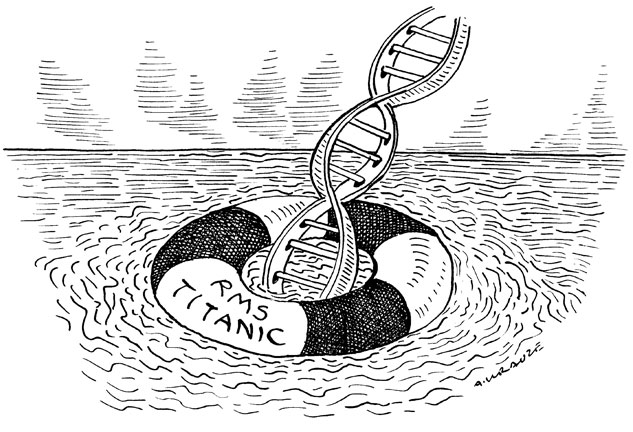 On a trip to her father’s childhood home in Chesterville, Ontario, in May 2012, forensic scientist Tracy Oost of Laurentian University jumped at the chance to visit an old farmstead formerly owned by the Allison family, which lost three members in the RMS Titanic catastrophe. Oost had long been fascinated by the story of the “unsinkable” ship and, in particular, the research that followed its sinking. “Really, it’s the first mass disaster that was ever investigated to the depth that we investigate mass disasters now,” says Oost, who in 2001 oversaw the exhumation of graves at a cemetery in Halifax, Nova Scotia, to identify Titanic victims believed to be buried there.

For many years, the Allison family has been considered one of the lingering mysteries of the tragic sinking. Only baby Trevor was known to have survived; his parents, Hudson and Bess, and his two-year-old sister Loraine...

When Oost and her father stopped by the old Allison farmstead in Chesterville, the controversy was still raging, and Woods had recently asked the Allisons for samples of their DNA to prove her relationship to the family. An elderly couple currently occupying the farm knew the Allison family well, and when they learned that Oost was a forensic scientist, the pair was delighted. The couple put the family in touch with Oost, who, after a year of discussions, helped launch the Loraine Allison Identification Project and agreed to oversee a genetic analysis to get to the bottom of the matter. “They finally were just at a point [that they] were prepared to have DNA tests done,” Oost says.

There’s history in DNA, and if you can unlock that history, you can find some very powerful answers.—­Michael Baird, DNA Diagnos­tics Center

Oost says that she was unable to obtain a sample from Woods, but Woods’s sister Deanne Jennings, who had always been skeptical of her grandmother’s and sister’s claims, happily provided a little saliva. Sally Kirkelie, the granddaughter of Bess Allison’s sister, Maybelle, also submitted a sample. Because mitochondrial DNA (mtDNA) is passed from generation to generation through the female line, Kirkelie and Bess Allison would have both inherited the same mtDNA from their mothers, and Bess would have passed her mitochondrial genome on to Loraine. If Helen Kramer’s claims were true, Jennings should also share the same mtDNA. The test, then, was simple: analyze the mitochondrial genomes of Kirkelie and Jennings to see if they matched.

Oost had the samples sent off to the DNA Diagnostics Center in Fairfield, Ohio, where researchers conducted analyses of three hypervariable regions in the mtDNA. The test revealed no link, suggesting that the available historical evidence had been right all along: Loraine Allison had died the night the Titanic sank. “DNA really tells a story,” says Michael Baird, laboratory director at the DNA Diagnostics Center. “There’s history in DNA, and if you can unlock that history, you can find some very powerful answers.”

But Woods and her supporters, including Hudson and Bess Allison’s great-niece Carol Tonyan, are still not convinced. They suspect that the DNA test was tampered with somehow (though Woods declined to give details at the advice of her legal counsel) and are actively pursuing a second DNA analysis. “There’s much to be suspect about that [test],” says Woods, who is in the process of writing a book detailing why she thinks the Allison family would go to such great lengths to cover up the truth. “Our documentation paints a completely different story.”

But Oost is losing patience. “At some point [Woods is] going to have to accept the fact that there’s a valid DNA test that says she’s wrong.”

Clarification (May 5): This story has been updated from its original version to clarify that Oost did not send the saliva samples to DNA Diagnostics herself. Rather, the company acquired the samples directly to ensure that the tests have an unbroken chain of custody. The Scientist regrets any confusion.