When Amanda Kitts’s car was hit head-on by a Ford F-350 truck in 2006, her arm was damaged beyond repair. “It looked like minced meat,” Kitts, now 50, recalls. She was immediately rushed to the hospital, where doctors amputated what remained of her mangled limb.

While still in the hospital, Kitts discovered that researchers at the Rehabilitation Institute of Chicago (now the Shirley Ryan AbilityLab) were investigating a new technique called targeted muscle reinnervation, which would enable people to control motorized prosthetics with their minds. The procedure, which involves surgically rewiring residual nerves from an amputated limb into a nearby muscle, allows movement-related electrical signals—sent from the brain to the innervated muscles—to move a prosthetic device.

Kitts immediately enrolled in the study and had the reinnervation surgery around a year after her accident. With her new prosthetic, Kitts regained a functional...

What Kitts’s prosthetic limb failed to provide was a sense of kinesthesia—the awareness of where one’s body parts are and how they are moving. (Kinesthesia is a form of proprioception with a more specific focus on motion than on position.) Taken for granted by most people, kinesthesia is what allows us to unconsciously grab a coffee mug off a desk or to rapidly catch a falling object before it hits the ground. “It’s how we make such nice, elegant, coordinated movements, but you don’t necessarily think about it when it happens,” explains Paul Marasco, a neuroscientist at the Cleveland Clinic in Ohio. “There’s constant and rapid communication that goes on between the muscles and the brain.” The brain sends the intent to move the muscle, the muscle moves, and the awareness of that movement is fed back to the brain (see “Proprioception: The Sense Within,” The Scientist, September 2016). 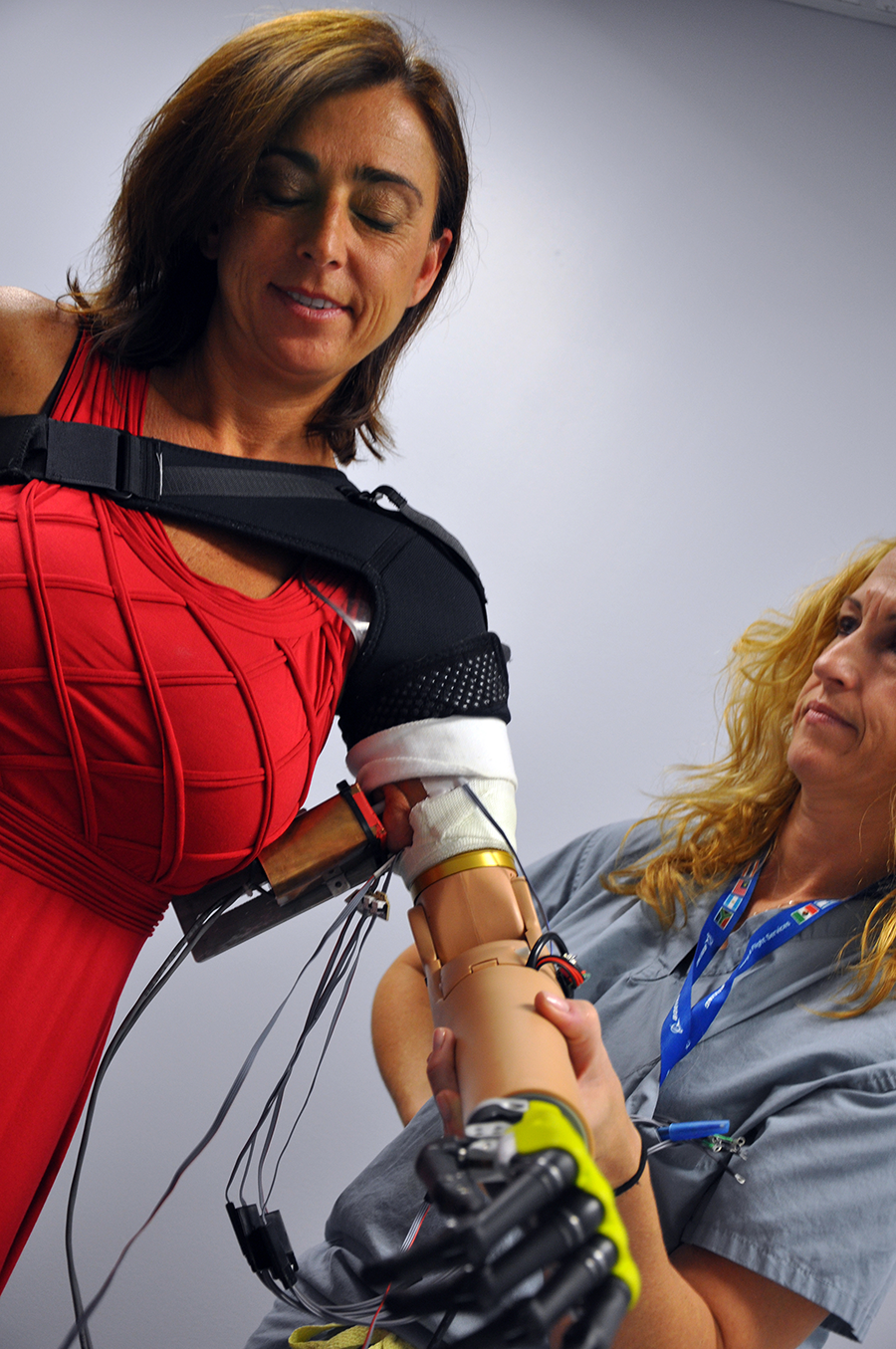 Prosthetic technology has advanced significantly in recent years, but proprioception is one thing that many of these modern devices still cannot reproduce, Marasco says. And it’s clear that this is something that people find important, he adds, because many individuals with upper-limb amputations still prefer old-school body-powered hook prosthetics. Despite being low tech—the devices work using a bicycle brake–like cable system that’s powered by the body’s own movements—they provide an inherent sense of proprioception.

To restore this sense for amputees who use the more modern prosthetics, Marasco and his colleagues decided to create a device based on what’s known as the kinesthetic illusion: the strange phenomenon in which vibrating a person’s muscle gives her the false sense of movement. A buzz to the triceps will make you think your arm is flexing, while stimulating the biceps will make you feel that it’s extending (Exp Brain Res, 47:177–90, 1982). The best illustration of this effect is the so-called Pinocchio illusion: holding your nose while someone applies a vibrating device to your bicep will confuse your brain into thinking your nose is growing (Brain, 111:281–97, 1988). “Your brain doesn’t like conflict,” Marasco explains. So if it thinks “my arm’s moving and I’m holding onto my nose, that must mean my nose is extending.”

To test the device, the team applied vibrations to the reinnervated muscles on six amputee participants’ chests or upper arms and asked them to indicate how they felt their hands were moving. Each amputee reported feeling various hand, wrist, and elbow motions, or “percepts,” in their missing limbs. Kitts, who had met Marasco while taking part in the studies he was involved in at the institute in Chicago, was one of the subjects in the experiment. “The first time I felt the sense of movement was remarkable,” she says.

In total, the experimenters documented 22 different percepts from their participants. “It’s hard to get this sense reliably, so I was encouraged to see the capability of several different subjects to get a reasonable sense of hand position from this illusion,” says Dustin Tyler, a biomedical engineer at Case Western Reserve University who was not involved in the work. He adds that while this is a new, noninvasive approach to proprioception, he and others are also working on devices that restore this sense by stimulating nerves directly with implanted devices (Sci Rep, 8:9866, 2018).

Marasco and his colleagues then melded the vibration with the movement-controlled prostheses, so that when participants decided to move their artificial limbs, a vibrating stimulus was applied to the muscles to provide them with proprioceptive feedback. When the subjects conducted various movement-related tasks with this new system, their performance significantly improved (Sci Transl Med, 10:eaao6990, 2018).

The first time I felt the sense of movement was remarkable.

“This was an extremely thorough set of experiments,” says Marcia O’Malley, a biomedical engineer at Rice University who did not take part in that study. “I think it is really promising.”

Although the mechanisms behind the illusion largely remain a mystery, Marasco says, the vibrations may be activating specific muscle receptors that provide the body with a sense of movement. Interestingly, he and his colleagues have found that the “sweet spot” vibration frequency for movement perception is nearly identical in humans and rats—about 90 Hz (PLOS ONE, 12:e0188559, 2017).

For Kitts, a system that provides proprioceptive feedback means being able to use her prosthetic without constantly watching it—and feeling it instead. “It’s whole new level of having a real part of your body,” she says.