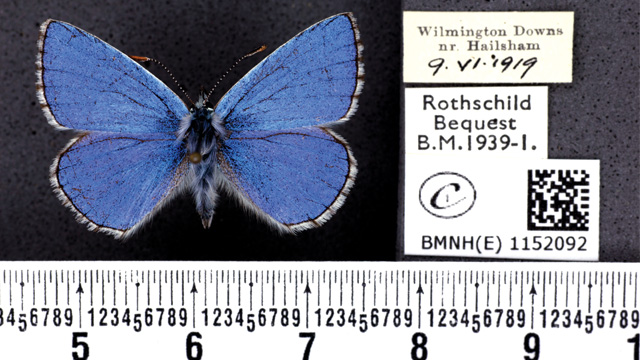 BLUE GOLD: Populations of the Adonis Blue butterfly (Polyommatus bellargus) have been declining within its grassland habitats in Great Britain due to a lack of herbivore grazing.© THE NATURAL HISTORY MUSEUM, LONDON

Throughout the 19th and most of the 20th centuries, butterfly collectors in the United Kingdom descended each spring upon fens, forests, and grasslands where prized insects thrived. Some of the net-wielders sought adventure; others hoped to add to scientific understanding; still others were motivated by mania or money. They hunted butterflies that bore evocative names, like the Adonis Blue, whose males are a striking sapphire, and the Duke of Burgundy, whose orange-and-black wings have a metallic sheen.

The collectors prized butterflies with unusual markings that made them beautiful and valuable. Now, those collections hold a wealth of information for ecologists interested in something quite different—a record of the impacts of climate change on the survival not...

Phenology is the study of patterns in seasonal natural phenomena, such as the emergence of caterpillars or the development of seedpods. Specimen collecting has faded out of fashion, but the rise of citizen science projects, such as those that invite the public to document the timing of environmental events, has provided scientists with a new way to track phenology. In recent years, data from around the globe have suggested that accelerated changes in temperature and rainfall are causing phenological shifts across the plant and animal kingdoms.

Desynchronization of these events, says Steve Brooks, an entomologist at the British Natural History Museum (NHM) in London, can reverberate through ecosystems. “The orange tip caterpillar feeds on the seedpods of garlic mustard and lady’s smock,” he says. “The seedpods have to be in the right condition for the butterfly to feed on—but if the plant isn’t flowering in synchrony with the emergence of the caterpillars . . . you could see how they could get out of synchrony with each other because they’re responding to different phenological drivers.”

“This is something that there’s been a lot of speculation about—how climate change is affecting food webs,” says Richard Primack, a professor of biology at Boston University. “It’s proved to be surprisingly difficult to work on. At this point, people are still trying to document the reality of the mismatch.”

To determine how severe these shifts have become, Brooks and a team of ecologists from the NHM and Coventry University first needed to identify a pre-climate change baseline. That information lay in the cork-lined wooden drawers of the NHM’s Lepidoptera collection, which holds half a million specimens of moths and butterflies and stretches back two centuries. “Establishing baseline data allows scientists to have a clear, testable hypothesis of whether emergence, bloom, migration, and/or fledging times are changing,” says Rich Hatfield, a conservation biologist with the Xerces Society who was not involved with Brooks’s study, in an e-mail to The Scientist.

Brooks’s team selected just four species and a fraction of the collection to run a pilot study—2,100 specimens of the Adonis Blue, the Duke of Burgundy, the grizzled skipper, and the orange tip. Each butterfly had a slip of paper identifying the date and location of its collection, which was then matched to temperature and precipitation records.

The ecologists regressed the earliest collection date against temperature and found that butterfly collection dates tended to be earlier in warm springs and later in cool springs. They also found that wetter springs corresponded with later emergence dates.

“In a way, none of that surprised me,” Brooks says. What did surprise him, however, was the difference between the museum data and the observed data from a citizen science project called the United Kingdom Butterfly Monitoring Scheme that started in 1976. The monitoring scheme got rolling just as widespread specimen collection was dwindling and climate change began to accelerate.

Comparing these modern data with the historical specimens, Brooks’ team identified two noteworthy differences. First, they found that while March climatic conditions had the greatest impact on emergence dates for the museum butterflies, February conditions were the most significant in modern decades. Second, the rate of climate-driven disruption to emergence timing changed drastically over the century. Between 1880 and 1970, for instance, a 1° C rise each spring in local temperature corresponded to orange tip butterflies emerging 8–10 days sooner. But after 1976, a 1° C warming corresponded to an emergence that was only 2–5 days earlier.

This is something that there’s been a lot of speculation about—how climate change is affecting food webs.
—­Richard Primack, Boston University

Brooks says that this so-called butterfly advancement rate has become compressed “because they’ve started to reach a ceiling. Now these early-emerging butterflies are approaching the limits of their advancement—it’s just not possible to get any earlier.” In other words, in January, the day lengths may be too short and the temperatures too cold for butterflies to emerge from their chrysalises any earlier.

Having found this pattern in just four species, Brooks and his team hope to turn next to more butterflies and to other organisms that populate the food web. By studying comparable phenological data in the museum’s flowering plants, upon which Lepidoptera feed, and birds, which rely on Lepidoptera for food, they can piece together a more complete picture of how climate change is impacting entire communities—and whether they are falling out of synchrony.