About a two-hour drive south of Fairbanks, Alaska, near the northern tip of Denali National Park, stands a series of fences. In the winter, snow piles up behind each fence, creating drifts roughly a quarter-meter high. These drifts, which insulate the tundra soil by preventing the chilly winter air from stealing its heat, are part of an experiment interrogating how permafrost—soil that remains frozen even as snow melts in the tundra—might be affected by global warming.

If old carbon that has been locked up for hundreds or thousands of years is being respired, this will cause a long-term increase in the concentration of carbon dioxide in the atmosphere.

“Permafrost is one of the most unique kinds of soil,” says Neslihan Taş, an environmental microbial ecologist at Lawrence Berkeley National Laboratory. “It contains more carbon than any other soil on Earth and twice as much carbon as is available in the atmosphere.” Because permafrost tends to maintain temperatures close to freezing, even in summer, microorganisms inhabiting this soil tend to be relatively inactive, so carbon is used up more slowly here than it is in warmer soils. But as global temperatures rise, microbes thaw and start to eat more, researchers hypothesize, transforming carbon stored in the soil into greenhouse gases such as carbon dioxide and methane that can then diffuse into the atmosphere.

In previous attempts to test this hypothesis, scientists took soil samples from the Arctic, warmed them in the lab, and found increases in emitted CO2. However, these lab studies were limited in their ability to simulate the complex interactions of microbial communities, so Northern Arizona University ecosystem ecologist Ted Schuur and colleagues decided to set up a field experiment. In the winter of 2008, Schuur and his colleagues erected the six fences in Alaska, where they have been insulating the same patches of permafrost over the last decade of winters.

The team collected soil samples from around each fence—both from behind the fence, where the snow had accumulated during the winter, and in front of it, where the soil was uninsulated—about a year and a half after the fences were installed, and then again three years later. The researchers analyzed the microbial DNA extracted from the soil to reveal the community’s range of lifestyles and metabolic activity. After 4.5 years, the average temperature of the insulated soil was roughly 1°C higher than that of the uninsulated soil, and the composition and activity of the microbial communities living there had changed rapidly as a result, the researchers reported in July. 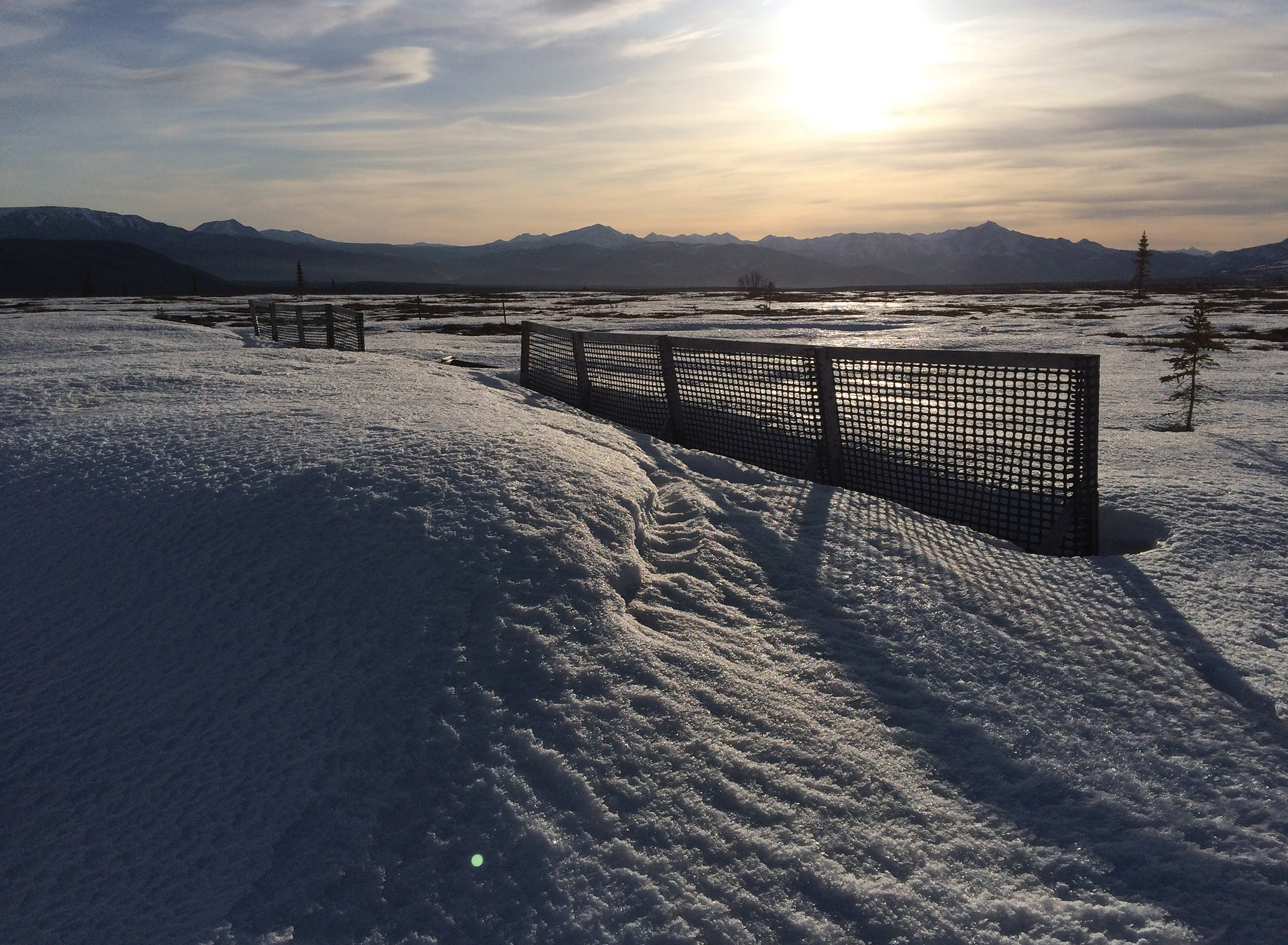 “We were surprised by how quickly the microorganisms responded to warming,” says study coauthor Eric Johnston, who worked on the project as a graduate student at Georgia Tech and is now a postdoctoral researcher at Oak Ridge National Laboratory (ORNL) in Tennessee. Particularly noticeable was the increase in abundance of methane-producing microbes deep in the insulated soil. For example, at the end of the study period, the team found that soil that was between 45 and 55 centimeters under the surface in the insulated plots contained around three times as many microbes in the order Methanosarcinales as the uninsulated soil did. Methane warms the atmosphere 30 times more than carbon dioxide does over the same period of time, so it’s a “somewhat alarming” finding from a climate perspective, Johnston says.

Dave Graham, a microbial ecologist at ORNL who was not involved in the study, says he finds the changes in microbial composition in insulated tundra compelling because the result aligns with data that he and others have collected on permafrost microbes in the lab. “Certain microbial populations take a long time to establish after permafrost thaw,” he explains. “Methane producers, for instance, seem to be very sensitive to freezing.” Based on his team’s lab results, Graham and colleagues predicted that a long stretch of warmer temperatures would allow a large population of methane-producing microbes to grow—just as Schuur, Johnston, and their colleagues found. “It’s neat to see these kinds of [microbial] behaviors happening in the lab and all the way to the field.”

Although the current study identified the genes present in the microbial community, it couldn’t detect which of those genes were producing proteins. “One of the critical [next] steps is understanding which genes are actually expressed: Which organisms are working hard, and what are they doing?” Graham says. “Another critical question is: What are they actually consuming?” The researchers note in the paper that the plant community in the experimental plots is becoming more abundant as a result of the insulation experiment.

Plants can contribute fresh carbon to the soil for microbes to decompose, in addition to the older carbon already stored in the permafrost. Distinguishing between the two carbon sources is important, Johnston says, because if all of the carbon being metabolized by microbes is from fresh plant material, the resulting fluctuations in atmospheric carbon dioxide levels will be relatively minimal. On the other hand, “if old carbon that has been locked up for hundreds or thousands of years is being respired, this will cause a long-term increase in the concentration of carbon dioxide in the atmosphere.”

Schuur is starting to tackle these questions. In another paper published in July, he and his colleagues reported that, when analyzed together, the insulated and the uninsulated plots of soil lost an average of 5 percent of their stored carbon per year over five years, suggesting old carbon is indeed being used by resident microbial communities. Based on atmospheric warming predictions, that translates to permafrost losing up to 78 percent of carbon in its top 55 centimeters by the end of the century.

The researchers note in their paper that they still need to see if the results hold true in other plots of permafrost around the Arctic, but the findings suggest permafrost warming will lead to significant greenhouse gas emissions, they conclude. “There is increasing recognition that the processes of soil microorganisms, and their responses to rising temperatures, need to be better incorporated into climate models in order to improve the accuracy of climate predictions,” Johnston says. “Research like this provides information for other researchers tasked with improving these models.”