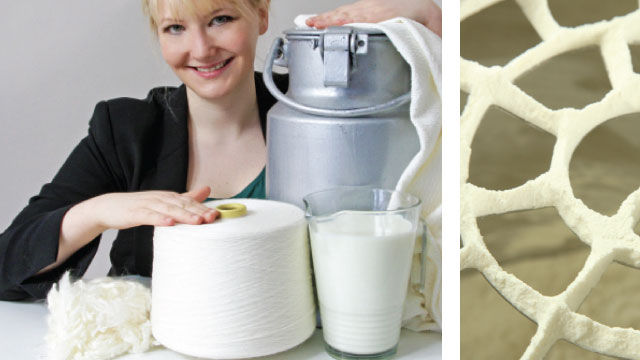 When German microbiology grad student Anke Domaske’s stepfather underwent chemotherapy to treat his cancer, he, like many patients, developed sensitive skin. Seeing him suffer, Domaske set out to find a softer, nonallergenic fiber from which to spin cloth for him. In 2009, she found YouTube videos describing how casein, a milk protein, has been used to make textiles since the 1930s. Producing fiber from casein required copious amounts of water, high heat, and formaldehyde, however. In her kitchen, Domaske started tinkering with the formula to make it more eco-friendly. The result was QMilk, a casein-based fabric that she describes as “a fiber you could eat.” Producing QMilk uses no toxic chemicals; it also takes 80 percent less...

In April, Domaske fired up the first large-scale machine for her fledgling company, also called QMilk, which launched in 2011. Her short-term plans include designing and producing her own clothing line, but car manufacturers, carpet makers, and medical companies, among others, have expressed interest in QMilk. “It’s an exciting time for us,” she says.

To manufacture the fabric, Domaske uses milk that doesn’t meet Germany’s strict food-safety standards. Every year, “two million tons of milk are thrown away in Germany alone,” she says.

Worldwide, one third of all the food produced, about 1.4 billion tons per year, is wasted, with staggering economic and environmental impacts, according to a recent United Nations report. In 2012, the U.S. alone generated more than 36 million tons of food waste, of which less than 5 percent was composted, according to the U.S. Environmental Protection Agency. While some forward-thinking waste managers propose converting this lost biomass into energy using bioreactors powered by anaerobic digesters, a growing number of researchers and entrepreneurs around the world are finding ways to keep that food out of the trash stream altogether. 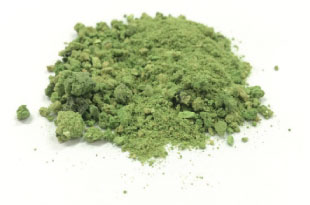 WASTE TO FUEL: Carol Lin of the City University of Hong Kong has developed a method that uses food waste to grow microalgae, which can then be used for biofuels and animal feed. COURTESY OF CAROL S.K. LINIn Hong Kong, where more than 6 million tons of municipal solid waste are generated each year and landfills are expected to reach capacity by the end of this decade, the government has aggressively invested in waste-reduction strategies. A research team led by Carol Lin of the City University of Hong Kong is working with Starbucks to convert its bakery and coffee waste into succinic acid or other useful compounds. Succinic acid can be used to make, among other things, biodegradable plastics. Lin’s team has devised a biorefinery that uses fungi to break food scraps down into simple sugars that are then fed to bacteria that produce succinic acid via fermentation. Although the researchers initially tried to convert coffee grounds, they have not been able to extract as much succinic acid from them as from baked goods.

Starbucks funded an early phase of Lin’s biorefinery, and stores in Hong Kong continue to provide her with bakery and coffee waste. “We used to get white-bread slices from local bakeries and cafes,” Lin says. “With the feedstock from Starbucks, it really helped to move our research forward.” She is now hoping to attract private partners so her team can scale up production to squeeze succinic acid from larger amounts of food waste.

Hong Kong’s Innovation and Technology Commission funds her current work, but Lin explains the difficulty of attracting private funding by noting that her biorefineries are more expensive to operate than other trash-disposal technologies. Most private investors and companies interested in producing succinic acid are wary of the uncertainties inherent in scaling up a complex technology. Convincing investors to fund industrial processes is a tough sell.

Some inventors, like QMilk’s Domaske, strike out on their own with start-up companies. In Burntisland, Scotland, materials scientists David Hepworth and Eric Whale founded CelluComp, which makes Curran (Gaelic for carrot)—a cellulose nanofiber manufactured from carrot and sugar-beet  waste from the food production industry. “While playing around with different plant material [Hepworth and Whale] realized that root-vegetable cell structures were unique and had some interesting properties,” CEO Christian Kemp-Griffin says in an e-mail. Curran makes a light and strong material that can be used as a component in a wide range of composites or as a reinforcing additive for carbon fiber or concrete. It provides strength similar to that of carbon fiber, but with much less environmental impact. In 2007, Hepworth and Whale garnered industry design awards for a fishing rod that was made from Curran and carbon fiber. Curran can also be used as a thickener and reinforcer for paints and coatings, which is where much of the company’s energy is focused now.

Other entrepreneurs are exploiting agricultural waste. Thailand is one of the world’s leading pineapple producers, and Taweechai Amornsakchai of Mahidol University in Bangkok wants the farmers who grow the crop to benefit from the plant parts that remain after harvesting the fruits. His team has developed a method of extracting tough, cellulosic fibers from pineapple leaves, which can be used as a plastics-reinforcement additive, much like fiberglass (Materials & Design, 55:292-99, 2014). Amornsakchai says there’s demand from plastics producers, but he’s still working on getting a steady supply of pineapple leaves from farmers. He’d like to ramp up faster, but lacks the funding to make larger-scale machines to extract the fibers. “We’d just like somebody who can see its benefit,” he says, “and invest in the machinery to extract the fiber and use it.