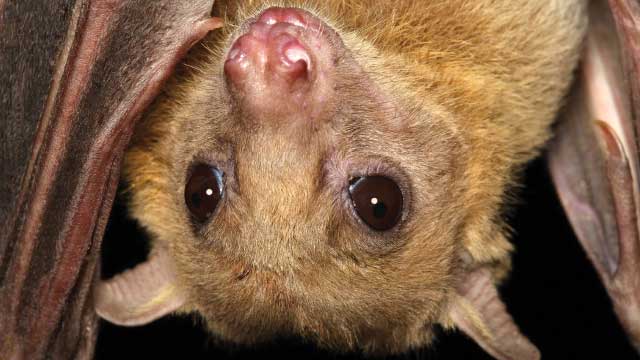 BATTY HEAR, BATTY DO: The vocalizations of Egyptian fruit bats (Rousettus aegyptiacus) and other species of the winged mammals may be shaped by the sounds of their colony mates.JENS RYDELL

Scientists can trace the evolutionary histories of bats and humans back to a common ancestor that lived some tens of millions of years ago. And on the surface, those years of evolutionary divergence have separated us from the winged mammals in every way possible. But look on a sociobehavioral level, as some bat researchers are doing, and the two animal groups share much more than meets the eye.

Like humans, bats form huge congregations of up to millions of individuals at a time. On a smaller scale, they form intimate social bonds with one another. And recently, scientists have suggested that bats are capable of vocal learning—the ability to modify vocalizations after hearing sounds. Researchers long...

In humans, vocal learning can take the form of adopting styles of speech—for example, if a Brit were to pick up an Australian accent after moving down under. Yossi Yovel, a physicist turned bat biologist at Tel Aviv University who has long been fascinated by animal behavior, recently demonstrated that bat pups can acquire “dialects” in a similar way.

Egyptian fruit bats (Rousettus aegyptiacus), like most bats, are very vocal creatures. If you walk through the streets of Tel Aviv at night, Yovel says, you will often encounter the mammals eating in fruit trees found throughout the city. In contrast to many of the sounds bats generate that are outside the frequency range of human hearing, the social vocalizations of Egyptian fruit bats are clearly audible. Their daytime roosts—mostly in caves, containing hundreds or thousands of individuals—are often tightly packed and are usually quite loud with what sound like arguments. Many of Yovel’s videos show young bat pups jabbing colony mates with a wing, a provocation that tends to elicit an irritable chirp in response. Yovel says an accurate translation would be: “Get out of my way!”

Researchers long considered vocal learning to be practiced only by humans, songbirds, and cetaceans, but have
more recently identified examples of the behavior in seals, sea lions, elephants—
and now, bats.

To study vocal learning in bats, Yovel and his team went to nearby caves and caught 15 pregnant mothers. He separated them into three captive colonies, where they each gave birth to one pup. After about two and a half months, when the bat pups were independent and no longer clinging to their parent, he released the mothers. From the pups’ very first day of life until the end of their first year, Yovel played them recordings of the “get out of my way” sounds they would usually hear around them in colonial roosts. Yovel played a distinct dialect to each colony. Although the pups retained a hint of their mothers’ dialect, their vocalizations eventually became more similar to the ones they were exposed to in the lab (PLOS Biol, 15:e2002556, 2017).

Brock Fenton, a bat biologist at Canada’s Western University, can’t explain why scientists hadn’t looked for vocal learning in bats before. “If you were looking for an ideal study animal where vocalizations are really important, you’d have to really search hard to find something better than bats.”

But what exactly is a bat dialect? Yovel distinguished the three dialects mainly based on the differing fundamental frequencies—that is, the pitch—of the bats’ quarrelling sounds. One group, for instance, had a low base pitch at around 250 Hertz, and one group had a higher pitch at 1,315 Hertz. This is the same as the difference between a B3 piano key—the note sung by Lady Gaga throughout the verses of her song “Poker Face”—and an E6, the highest note Kesha reaches in her chorus of “Praying.” The third dialect had an intermediate fundamental frequency.

Bat dialects don’t just differ by frequency. Other features, such as the duration of a call or the frequency at which a particular bout is loudest, also vary. Using computational methods to extract these features, Yovel identified distinct dialects that can be acoustically characterized in R. aegyptiacus.

Remarkably, bats are not just learning their dialect from their mothers (which is what many species of songbird do). They are listening and learning from the whole colony that surrounds them. Yovel calls this “crowd vocal learning,” and speculates that it likely evolved to make it easier for bats to recognize colony mates. A young, inexperienced fruit bat pup, for example, might arrive at a tree it hasn’t visited before. Being able to recognize its own colony in the same tree will help it decide whether it’s safe to eat the fruit or not.

Yovel’s research is not only useful for understanding how bats communicate with one another, but also has broader applications for conservation science. Many bat populations are suffering serious declines due to diseases, habitat loss, or wind turbines, and Fenton says it’s vital to get a handle on where they are, and in what abundances. Fortunately, many species continually leak information about their whereabouts through high-frequency pulses they emit while echolocating, as well as through social sounds. The first global bat monitoring project, staffed by NGOs and volunteers around the world, aims to count bats by recording these vocalizations. “If you let the bats tell you where they are, then you know what to protect,” explains Fenton.

But researchers are still far from transforming bat noises into population data, Fenton cautions. Bats represent a whopping fifth of all mammals and comprise about 1,600 species, he says, and the noises they make can be highly variable, so it’s difficult to know which species you are eavesdropping on. But findings like Yovel’s that parse the diversity of bat acoustic signals could aid in this challenge, Fenton says.

As for Yovel’s 14 bat pups (one of the original 15 died), which are now adults with heavy accents, they’ve been returned to their original roosts. Now, Yovel is using GPS devices to track a colony that roosts on the Tel Aviv University campus to learn more about bat behavior and how they use vocal learning.

Fenton is excited for the future: “It’s almost revolution time,” he says. “We’re really on the edge of a bunch of interesting discoveries.”