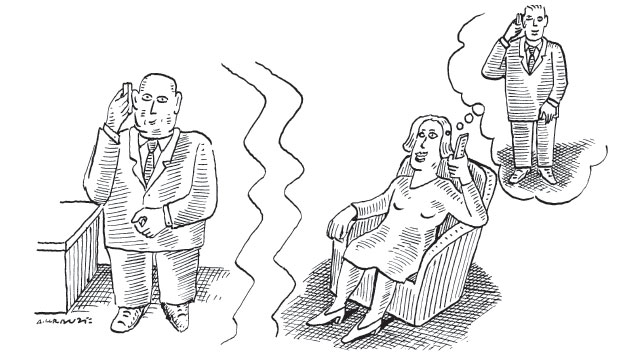 Joey Tribbiani was on to something. With a nod of the head and a cocky half-smile, the Friends character’s famous “How you doin’?” catchphrase, intended to lure women, epitomized the attractive traits in male voices—at least according to Yi Xu, who studies speech at University College London. A 2013 study by Xu found that women rated men’s voices as more attractive if they had a lower pitch, more breathiness (as opposed to a more pinched or pressed quality), and more-compact formants (which makes the voice sound deeper). “Everything reminds us of Joey from Friends,” Xu says.

The results of Xu’s study suggest that the content of speech isn’t everything (I mean, really, how many women are turned on by the words Joey says?)—the voice itself carries information about the attractiveness of the speaker. Earlier studies pointed to as much. Susan Hughes of Albright...

“These ideal sex-specific body configurations are revealing of the influence of sex hormones that shape features that signal our reproductive maturity and potential,” Hughes says via email. “Likewise, raters were able to decipher these sex-specific body configurations of others simply by hearing one’s voice,” she adds, referring to the results of a later study that asked listeners to estimate a speaker’s body proportions.

While there have been quite a few studies on voice attractiveness, says Katarzyna Pisanski, a postdoc at the University of Sussex in the U.K., less attention has been paid to body size and specific acoustic parameters—that is, what are the components of the voice that communicate our appearance?

To probe this question, Pisanki and her collaborators recorded the voices of 700 people from Germany, Canada, or the U.K. as they spoke a series of vowels. Ditching words allowed the researchers to isolate the voices’ acoustics, including pitch, formants, and elements of unevenness in the voice called jitter and shimmer (the more of either, the rougher or raspier the voice). Then they observed how well these vocal aspects correlated with height, waist-to-hip and chest-to-hip ratios, body mass index, and other indicators of appearance. The result, says Pisanski, “is a more complex story than what we would have thought.”

Certain vocal features predicted body size and shape. Formants—measurements of resonance—are determined by the length of a speaker’s vocal tract, and Pisanski found they were also the best correlates of a person’s height and weight. That is, longer vocal tract lengths—which lead to a more resonant voice—were more likely among taller and heavier individuals.

A lower waist-to-hip ratio among women as well as a higher chest-to-hip ratio among men were also linked with higher levels of vocal perturbation or roughness (jitter and shimmer). This means that women with more-masculine body shapes have smoother voices, Pisanski says, “which could hypothetically be due to relatively higher levels of testosterone among these women.”

Overall, there were more vocal correlates of women’s body proportions than men’s. Given the nature of the study, it’s impossible to explain why that is, but Pisanski suspects it has to do with natural selection and communicating reproductive fitness. “In terms of what we know about the importance of women’s body shape, it would make more sense to have more information on height in men’s voices and body shape in women’s voices,” says Pisanski.

David Puts of Penn State University says that, while there’s no evidence of that just yet, Pisanski’s suspicion makes sense, and Puts believes that hormones may underlie these vocal-physical correlates. Higher testosterone, for instance, is known to affect vocal cord development during puberty, and it’s also related to lower pitch in men’s voices. It also appears that women’s monthly hormonal cycles can influence their voices. A study by Puts revealed that listeners rated the voices of women who were in the fertile periods of their monthly cycles as more attractive. “But we didn’t find those [increases in attractiveness] are mediated by the usual suspects in terms of acoustic parameters,” such as pitch, formants, jitter, or shimmer, Puts says.

That lack of correlation brings up the question of perception: even if Pisanski’s study found acoustic traits correlated with certain physical aspects, can listeners detect those subtle variations and accurately predict what a speaker looks like? Pisanski’s current postdoc advisor David Reby of the University of Sussex says the correlations Pisanski’s team observed, while interesting, aren’t particularly revealing. “So that means that it is difficult to gauge someone’s size by their voice,” says Reby, who was not involved in the study. “Overall, the relationship with body size exists and is significant, but it’s not very strong.”

Xu says the trouble with trying to predict body size or shape from voice is that “everybody is trying to cheat.” That is, we are all trying to project the ideal physique—and, mostly unintentionally, our voices can lie. A short man may have a deep voice, while a woman with a boxy torso may be high-pitched and breathy. Xu says some of this may be influenced by society and how we learn to speak, but “cheating” is mainly due to physiology—such as the short man getting a heavy dose of testosterone during puberty, which would help to lengthen his vocal tract and deepen his pitch. “That’s why the correlation [between body shape and vocal parameters], even for the best ones, is so low,” he says.

“The relationships are there, but they’re relatively weak,” agrees Puts. Despite that, people often make inferences about appearance from voices—the height and pitch connection, for instance, being one most people generally agree upon. “It [raises the] question why we’ve evolved to pay attention to these things as strong indicators of body size even though they’re weak indicators.”

“I would say they put their finger onto something that requires more investigation,” says Reby.