ABOVE: Scientists have long puzzled over why some insects, such as this species of jewel beetle (Sternocera aequisignata), have glossy surfaces. © ISTOCK.COM, yod67

When actress Ellen Terry stepped onto the stage at Lyceum Theatre in London’s Westminster borough in 1888, she was dressed for the occasion. She was playing Lady Macbeth, and her manner and appearance needed to convey both great beauty and a certain otherworldliness, perhaps even evil. Her green dress, shimmering with blue-green light, perfectly matched the mood. But it wasn’t a dye that lent that dress (still viewable at Smallhythe Place in Kent) its eerie, glittering glamor; it was the wing cases of a species of glossy, iridescent beetle, woven by the hundreds into the material.

People have long been fascinated by the many members of the animal kingdom that are bright and shiny in this way. Iridescence is a visual property in which the perceived color of an object changes based on the angle it’s seen from, while glossiness—also called specularity—refers to its shine. Put another way, while iridescent surfaces reflect different wavelengths of light depending on the viewing angle, a glossy surface reflects all wavelengths at once, creating a mirror-like effect. The combination of these properties give the Buprestidae family of jewel beetles, among other animals, their characteristic metallic sheen.

Amanda Franklin, an ecologist at the University of Melbourne, became interested in these beetles having previously gotten hooked on studying color and vision through her work on mantis shrimp, which not only see more colors than humans do but are sensitive to multiple types of polarized light. Studying shrimp’s highly complex sensory systems ended up being excellent prep work for studying the comparatively simple mechanisms that determine the appearance of insect wing cases.

The iridescent shine of many beetles is produced structurally, she explains. Instead of having specialized pigments that absorb some wavelengths of light and reflect others, which can be metabolically expensive, it’s the physical features of these insects’ cuticles that trap and redirect some wavelengths. These can take the form of recurring structures that diffract light, or so-called photonic crystals, for example. Such features can produce extraordinarily vivid colors—such as the famous blue of the morpho butterflies—or, as in the case of these beetles, give objects glossy surfaces.

The purpose of these visual effects is less clear. While a substantial volume of research suggests that iridescence can help camouflage an animal—generally by breaking up its outline, making it harder to pinpoint—glossiness’s function has largely remained a mystery.

There are a few different hypotheses as to why these animals have a mirror-like sheen, Franklin notes. One is that it serves as a form of aposematism—the use of signals, typically visual, such as warning coloration, to keep predators away. It might also be a simple byproduct of cuticle structure: a stronger or lighter carapace, or one that can cool the animal in hot conditions or repel water, might also happen to be very shiny. But the leading—though largely untested—hypothesis, Franklin says, is that glossiness, like iridescence, can act as camouflage from predators such as birds that rely on sight to find food. 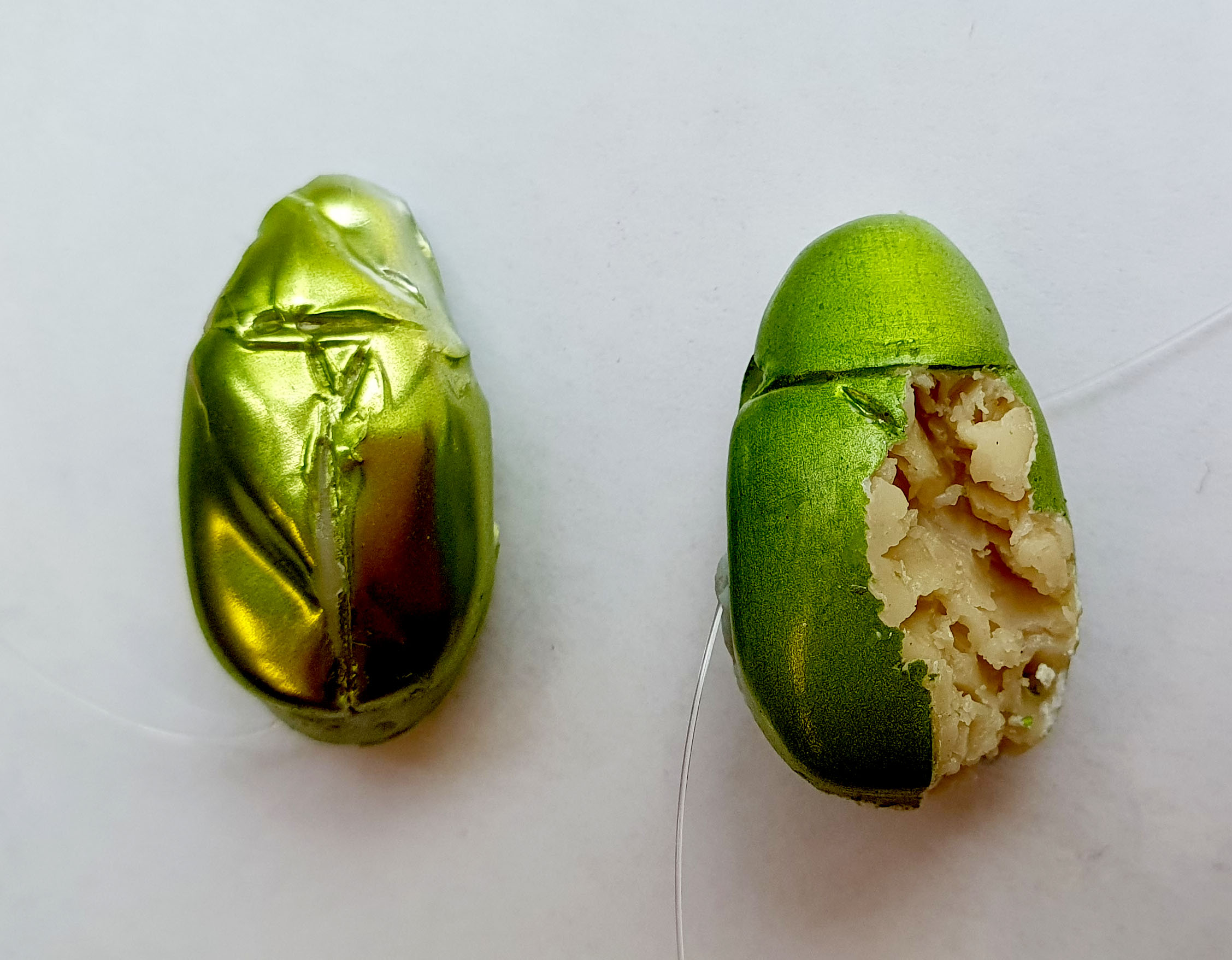 BUG DOUBLE: The team used replica beetles with shiny and matte surfaces to study the effects of glossiness on predation—something they could measure via peck marks from attacking birds (right).
Amanda Franklin

To test the idea, Franklin and colleagues set up a study with two main experiments. In the first experiment, researchers walked eight human volunteers equipped with eye-tracking headgear to four different areas of forest, and gave them five minutes to find 12 replica beetles in a 2-cubic-meter area. Half of the beetles were glossy, like the real thing, and the rest were matte; the researchers tracked how many of each the volunteers found.

In the second experiment, a similar set of replica beetles was placed in field and forest habitats, with the researchers checking daily for evidence of predation and taking note of replicas that had been damaged by birds. Missing replicas were attributed to bird attacks as well, as birds would be the only animals in the closed-off areas that were large enough to fully remove the fake bugs.

The results were not exactly as expected, Franklin explains. “Especially with the humans, we expected a result one way or the other: either that [the glossy beetles] would blend in or stand out more.” But shiny or matte, it made no difference to the humans or the birds. Apparently, being glossy was no help in finding the fake beetles, but no hindrance either.

Karin Kjernsmo, a research associate at the University of Bristol who wasn’t involved in the work, isn’t so sure. She’s done work on iridescence as a camouflage mechanism, and is currently studying glossiness’s role as well. She notes that distance might play a role in how well glossiness works as camouflage: in some of her experiments, she found that a glossy surface made iridescent beetles harder to spot by humans, and that people had to be closer to spot them than they did for matte beetles. The human volunteers in Franklin’s experiment were searching an area six feet across in all directions, so it’s possible, Kjernsmo says, that they were too close for the mirror-like effect to act as camouflage. 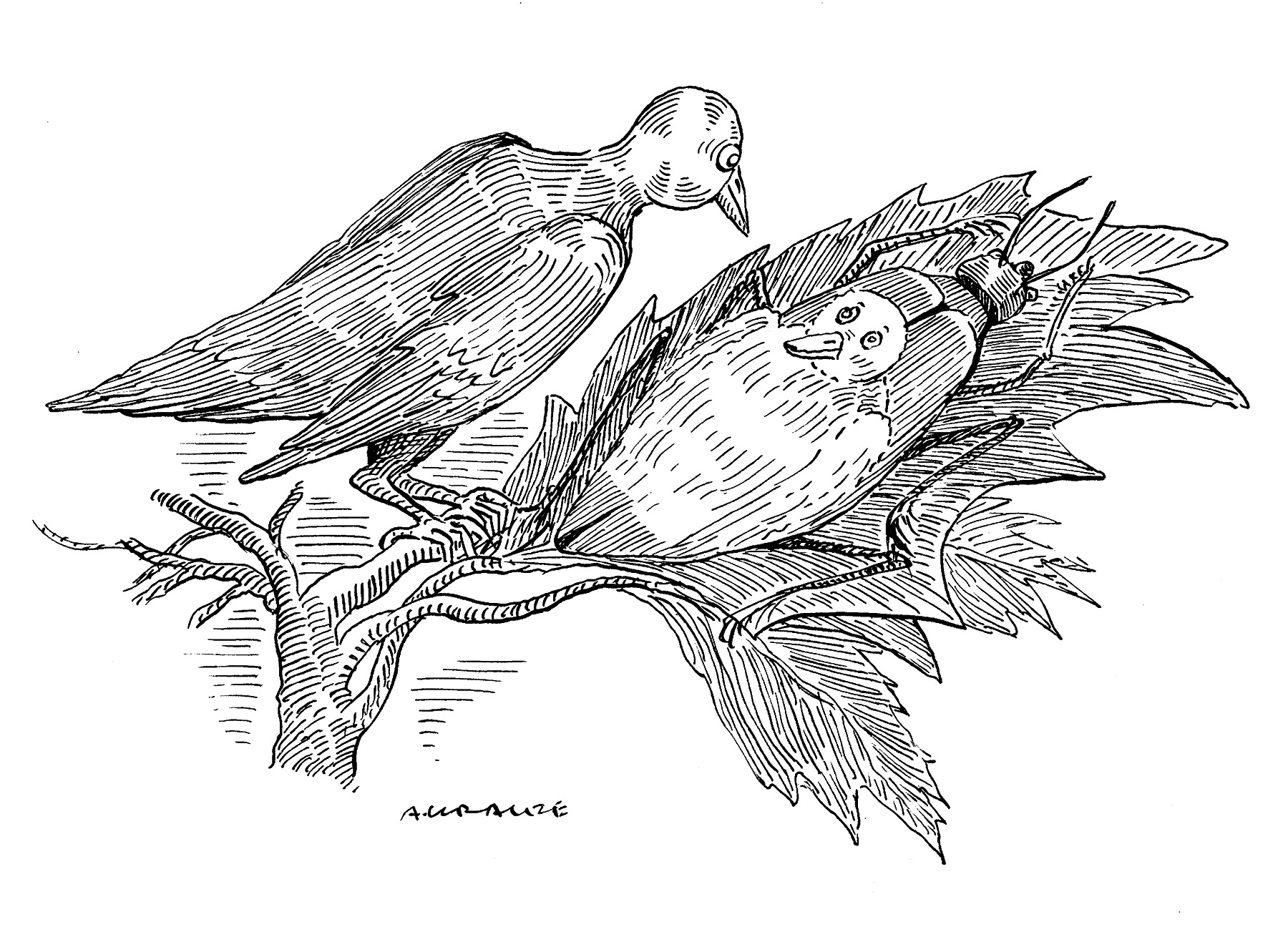 She also notes that the Melbourne team’s findings regarding bird predation could be interpreted differently. Predation rates in this experiment ranged from 3.4 percent to 17.6 percent across the study sites—in other words, the fake insects were left alone, or “survived,” 82.4 percent to 96.6 percent of the time. “That is incredibly high survival in these types of experiments,” Kjernsmo says. So perhaps the takeaway for the matte versus glossy hypothesis is “that both strategies seem to be good.”

Coleopterist Ainsley Seago, the curator of invertebrate zoology at the Carnegie Museum of Natural History who was not involved in the work, says that the research is a significant step forward. “Almost nobody has studied [specularity], so this paper is incredibly valuable,” she says.

Both Kjernsmo and Seago praise the authors for publishing their findings despite not finding the result they expected. “The fact that they were straight up about what the hypothesis was and that the data don’t support it, that alone is commendable,” Seago says. There’s a strong bias against publishing negative results, but they’re important, she adds. “If the data don’t reject the null hypothesis [that glossiness doesn’t help camouflage the animals], that’s very interesting.”

The next questions for Seago are phylogenetic. Mapping out which beetles are glossy and which aren’t could help resolve whether specularity has a purpose: evidence that it has evolved multiple times could suggest the trait is adaptive. Other research suggests glossiness may enhance warning signals, and Franklin says she has ideas of further aspects to investigate, from cuticle strength to cooling effects to how other animals, from predators to potential mates, interpret gloss. For Seago, this research gives her a jumping-off point too, she says. “I’ll be citing that paper in subsequent research in iridescence in scarab beetles.”