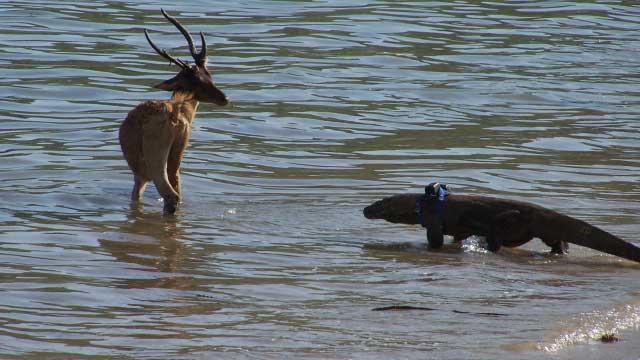 DRAGON PROBLEMS: A Komodo dragon fitted with a GPS tracking device stalks an injured Timor deer in the shallows fringing the Komodo Archipelago in Eastern Indonesia.PLOS ONE, 5:e11097, 2010; PHOTO BY ACHMAD ARIEFIANDY

With the world facing an anti-biotic-resistance crisis, the hunt is on for alternatives to fight bacterial infection. The quest has led peptide chemist Barney Bishop and bacteriologist Monique van Hoek, both at George Mason University in Virginia, to look for antimicrobial peptides in an unexpected place: inside the Komodo dragon.

Animals that live in “microbially challenging environments,” could be expected to harbor numerous and varied antimicrobial peptides, says van Hoek. Alligators, for example, live in swamps teeming with microbes and regularly sustain injuries...

Bishop’s team devised a way to mine antimicrobial peptides from the blood of these reptiles, using hydrogel microparticles designed to capture small, positively charged peptides. The technique allowed the researchers to pull potential antimicrobials peptides out of blood samples, then separate the hydrogel particles and determine the sequence of the peptides. A few years ago, Bishop, van Hoek, and their colleagues applied the process to blood samples from American alligators and identified 45 potential antimicrobial peptides.

“I was very surprised personally,” says van Hoek, who had found only two published studies that looked at peptides in crocodile blood, both of which had identified just a few peptides that showed little antimicrobial activity. “Their protocols are quite different from ours. We have more of a firehose problem: we had so many peptides that seemed promising and potentially active that we’d have to sort through.”

We have more of a firehose problem: we had so many peptides that seemed promising and potentially active that we’d have to sort through.—Monique van Hoek
George Mason University

Using computational programs to predict antimicrobial activity—based on sequence similarity to known antimicrobials and presumed qualities of the peptides, such as hydrophobicity and charge distribution—the researchers selected eight to synthesize for testing. Five of those appeared to be potent antimicrobials (PLOS ONE, doi:10.1371/journal.pone.0117394, 2015).

The results motivated the researchers to keep up their pursuit. In particular, “we always wanted to do the Komodo dragon,” Bishop says. There’s an old hypothesis that a cocktail of nasty bacteria in Komodo dragons’ mouths serves as a sort of venom. “A single bite from the Komodo dragon is often enough, over time, to take down its prey,” Bishop explains. “They track prey for days until it essentially drops. This way, the Komodo can bring down animals bigger than it that could bring it harm, such as water buffalo. All they need is a quick bite, and then they wait.”

While evidence to support this hypothesis remains scarce, it was enticing enough for Bishop and van Hoek to accept samples of Komodo dragon blood from the same St. Augustine, Florida, alligator farm that had provided them with gator samples. Again, the researchers found a large number of potential antimicrobial peptides—48 to be exact (J Proteome Res, doi:10.1021/acs.jproteome.6b00857, 2017).

But there was something different about the Komodo peptides, Bishop says. “I was really surprised that we see a very large number of histone fragments.” Forty-seven of the 48 peptides were derived from histone proteins. “We see multiple different histone proteins represented,” Bishop says. The researchers only tested blood samples from one Komodo dragon, but they are working to verify the results with a sample from another dragon now.

Histones themselves have been shown to have antimicrobial activity, the researchers note. Antimicrobial peptides called buforins, first identifed in the digestive systems of toads, for example, are derived from histones, and the fat cells of Drosophila produce extra histones when the flies have bacterial infections, “and that seems to be protective,” van Hoek says.

When van Hoek’s team tested eight synthetic replicas of the Komodo dragon peptides against Pseudomonas aeruginosa and Staphylococcus aureus, seven of them showed strong antimicrobial activity against both (the eighth was only effective against P. aeruginosa). “One thing we look for in microbiology are compounds that have broad-spectrum activity,” says van Hoek, which is why she tested one gram-positive (S. aureus) and one gram-negative (P. aeruginosa) organism. “We found some here, and we found some in our alligator study,” she says. “We’re really excited.” Last month, Bishop, van Hoek, and their colleagues published evidence that a new dragon-inspired synthetic peptide, which they dubbed DRGN-1, promoted healing in mice with infected and uninfected wounds (NPJ Biofilms Microbiomes, doi:10.1038/s41522-017-0017-2, 2017).

“It’s hard to know where the next antibiotic is going to come from, so these sorts of bioprospecting approaches are pretty neat,” says Marvin Whiteley, a microbiologist at the University of Texas at Austin who was not involved in Hoek and Bishop’s research.

Although there is a long road to the clinic for such antimicrobial peptides, their use would not be unprecedented. A mixture of antimicrobial peptides called colistin—originally discovered in the bacterium Paenibacillus polymyxa in the late 1940s—has been used to treat bacterial infections for more than half a century. Unfortunately, the treatment has caused kidney toxicity and other problems in many patients, and is now considered a drug of last resort. “People assumed that the whole class of drugs would have the same problems that colistin does,” van Hoek says of why there haven’t been other antimicrobial peptides that have made it to human trials yet. But, she adds, “especially in the current situation, where we’re facing the problem of multidrug-resistant bacteria, we no longer have the luxury of excluding whole classes of antibiotics.”

As for whether Komodo dragons harbor bacteria in their saliva as a form of venom to take down large prey—and thus need the antimicrobial peptides to protect themselves from infection—there remains little evidence to support this idea, besides the animals’ sometimes impressive predatory take-downs. In 2013, Ellie Goldstein, a professor of medicine at the University of California, Los Angeles, and colleagues surveyed the oral microbiomes of 10 captive adult dragons and found no virulent species (J Zoo Wildl Med, 44:262-72, 2013). “It was all basically environmental flora from their food,” Goldstein said. “Nothing there was pathogenic.”

So how do Komodo dragons take down a water buffalo? One idea, put forth by the University of Melbourne venom expert Bryan Fry: the wounds inflicted by the giant lizards get infected when the water buffalo wade into stagnant watering holes. The Komodo dragons then simply take advantage of the situation.