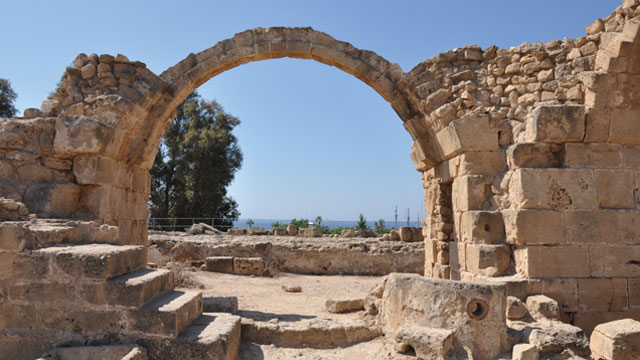 SECOND DOOR ON THE RIGHT: The ruins of Saranda Kolones harbor inside information on Crusaders.COURTESY OF EVILENA ANASTASIOU/ INTERNATIONAL JOURNAL OF PALEOPATHOLOGY

In January 2012, Evilena Anastasiou took a tour of the ruins of Saranda Kolones, a medieval castle on the Mediterranean island of Cyprus built around 1200, after Richard I of England invaded the island during the Crusades. Anastasiou, a native Cypriot on break from graduate school at the University of Cambridge, snapped some photos of the castle’s excavated concentric ring walls, marveled at its architecture, and took a souvenir: a small sample of soil containing decomposed feces from one of the castle’s several latrines.

Anastasiou brought a gram of soil from the latrine containing the centuries-old poop back to Cambridge where she works with paleoparasitologist Piers Mitchell, studying human parasites and their hosts from the ancient world.

Mitchell has traveled around Britain, the Middle East, East...

One difficulty in studying parasites from archaeological sites is that it’s difficult to pin down the age of most fecal samples. However, the castle on Cyprus was destroyed by an earthquake and abandoned less than 30 years after it was built. “So you have a very narrow time frame for when the castle was used,” says Mitchell. “In contrast, some castles were used for centuries, and it’s hard to date samples exactly in those situations.”

In the lab, Anastasiou suspended the soil sample she collected from the latrine, as well as a control soil sample collected outside the latrine, in an aqueous solution to disaggregate the soil and rehydrate eggs of parasitic worms that may have been present. She then used micro-sieves to separate any eggs, which would range in diameter from 30 to 150 microns, from the soil particles. Using a light microscope, she identified eggs of the giant roundworm Ascaris lumbricoides and the whipworm Trichuris trichiura—both human parasites—in the latrine sample, and calculated that the gram of ancient soil contained more than 1,100 eggs of the former and more than 100 of the latter. The control sample was devoid of eggs (International Journal of Paleopathology, doi/10.1016/j.ijpp.2013.04.003, 2013). 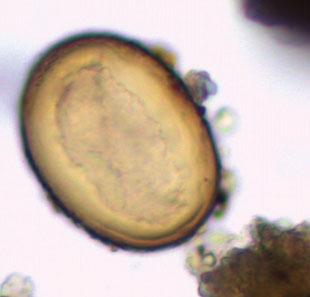 CLUE EGG: Ova from parasites, like this roundworm egg, littered the latrine soil sample that Evilena Anastasiou collected.COURTESY OF EVILENA ANASTASIOU/ INTERNATIONAL JOURNAL OF PALEOPATHOLOGYOnce hatched in the human intestines, nematodes embark on a remarkable journey. Immature larvae penetrate blood vessels and within six hours of infection reach the liver. From there they migrate to the heart and lungs. Several days later, the larvae burrow their way back into the small intestine, where they reach maturity. Female roundworms can lay more than 200,000 eggs per day, and whipworms about 2,000 to 10,000 per day.

Anastasiou says that these two worms infect human intestines when people prepare food with unwashed hands or use human feces to fertilize food crops—both common practices in 12th- and 13th-century Europe. “Their findings showed how sanitation in this castle was particularly poor, because the density of eggs found was quite impressive,” says Adauto Araújo, a paleoparasitologist at the Sergio Arouca National School of Public Health in Rio de Janeiro.

According to Mitchell, the high worm egg count can help explain why so many Crusaders died of malnutrition. On long sieges or during winter months, knights would often run low on food stores. “If you’re sharing your food with large numbers of worms in your intestines,” he says, “the worms are more likely to get the food before you do in times of famine.”

In addition to revealing the unhygienic lifestyle of the Crusaders, the Saranda Kolones feces samples yield clues about the origin of the traveling knights. Because no eggs were found belonging to fish tapeworms, which were prevalent in northern Europeans at the time, it was likely that these particular Crusaders hailed from Italy or southern France.

Genetic analysis of the eggs may also make it possible to compare ancient ascarid roundworms and whipworms with modern ones, which are today still the most prevalent intestinal parasites of humans. “We will be able to identify changes in their genomes that may indicate changes in virulence or pathogenicity,” says Araújo, who was not involved with Mitchell’s and Anastasiou’s study. Knowing more about the evolution of these parasites can also guide development of drugs to combat them. “There’s no point in making drugs to target parts of the DNA that change [frequently],” says Mitchell. “It’s much better to target the bits that are more stable and less likely to evolve.”