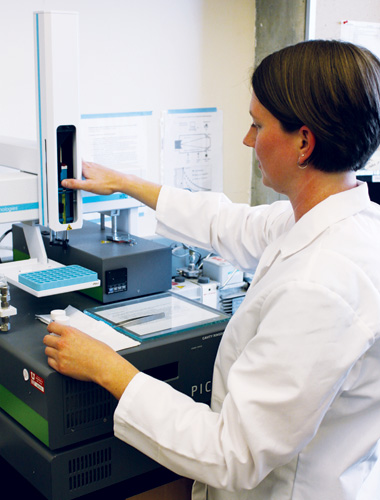 Analytical chemist Lesley Chesson likes making experiments easier. It started during graduate school at the University of Utah, where she studied stable isotopes of oxygen and hydrogen in beverages consumed in standard American diets, including the milk served with McDonald’s Happy Meals. Chesson wanted to use the beverage’s isotopic signature to see whether fast-food chains sourced their milk locally or shipped it long distances. Her search for the ideal instrument to measure isotopes in liquids led her to a small tabletop device which uses cavity ring-down spectroscopy (CRDS)—a method that detects isotope concentrations by measuring the decay of light passed through a gaseous sample—and spits out data in about 10 minutes.

Ratios of the heavy isotopes of oxygen and hydrogen, 18O and 2H, to the more common light isotopes, 16...

“I started wondering, what if I just injected the milk samples straight into the system?” Chesson recalls. After conducting a proof-of-concept study, where she compared whole beverages with their extracted water, Chesson had her answer. It turns out any sample gave accurate results without its constituent  water being extracted first. Alcohol befuddles her laser-based spectrometer, Chesson says, but the latest version addresses this hiccup. While experimenting with her protocol, she communicated frequently with Picarro, the company that makes the little isotope analyzer.

“Of course they were horrified,” Chesson explains: “I was injecting all these horrible things into the instrument!” CRDS is one breed of laser-based isotope analyzers, in which a laser beam is shot into a 10 cm-long cylinder bounded by three mirrors. The light bounces around the cylinder, weakening in intensity ever so slightly as it is absorbed by the gas inside, and minuscule amounts leak out every time it hits a mirror, explains Iain Green, Picarro’s director of marketing.  The “ring-down” curve refers to the light’s decay pattern after the laser is abruptly shut off, which is characteristic for specific isotopes. And because the laser beam traverses the cylinder many times, CRDS can detect very low concentrations of isotopes.

Stable isotope signatures are a well-established method for determining the authenticity of a food, says Wolfram Meier-Augenstein, principal scientist at the James Hutton Institute in Dundee, Scotland. An ingredient may be advertised as sugar derived from Brazilian sugarcane, but food scientists can use its heavy-carbon signature to learn if it was actually made from sugar beets instead, or its hydrogen and oxygen isotopes to show the sugarcane really grew in India, he explains. The most established method of obtaining these signatures relies on the isotope ratio mass spectrometer (IRMS), which measures isotopes in ionized samples based on their mass-to-charge ratio. The food industry is beginning to build databases of standard isotope signatures, says Chesson, because the isotopes in one sample have little meaning without reference standards. The European Union curates one such database on wine, with every year’s vintage tested and recorded.

The portability and quick learning curve for CRDS instruments—“They’re practically plug and play,” Chesson explains—give them advantages over the finicky mass spectrometers she works with. The small instruments are even sea-worthy, says Samantha Joye, a biogeochemist at the University of Georgia, who is taking CRDS into the Gulf of Mexico to trace hydrocarbons from the Deepwater Horizon oil spill as they move through the water and into the sediment below.

Stable isotope technologies, such as Picarro’s, are perfect for helping companies ensure that ingredients like coffee and cocoa are fair-trade, says Green. Once an isotopic signature is taken from an ingredient known to be fair-trade, companies just need to compare each new batch to the original. Shifts in the isotope ratios could signify that a new coffee or cocoa bean might not be fair-trade. Cattle smuggling across the border from Mexico can also be detected with CRDS analysis, says Green, because cattle raised in Mexico have different heavy carbon signatures than cattle raised in Texas.

Isotope signatures from human hair can also be used forensically to give an approximate area of origin, based on isotopes absorbed through drinks and food. Chesson’s work showed that beverage signatures from some sodas and bottled waters purchased in a specific area usually matched the local tap-water signature, meaning that local water was being used in production of each. “Even if people were drinking Dasani or Coke, they were drinking local water,” Chesson explains.

Chesson now works for Isoforensics in Salt Lake City, Utah, where part of her job involves testing ingredients for food companies. She can tell her clients when an ingredient in their food product may be adulterated. If orange juice claiming to be from Florida, for example, shows a different isotope signature than oranges grown in the state, it may be from concentrate, as the water used to reconstitute the pulp would give it a new signature, says Chesson. But because variations in weather patterns can also influence the signature of ingredients like oranges, an anomalous test isn’t a smoking gun, she explains, just a red flag that the company needs to scrutinize its ingredients more closely.