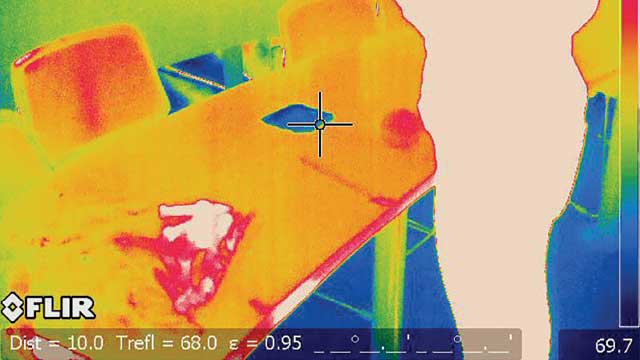 MICROBIAL COWORKERS: Infrared (top) and normal (bottom; right) images of microbiologist Jessica Green taking a built-environment microbiome sample from a desktop surface in a classroom at the Lillis Business Complex at the University of Oregon.KATE LAUE

Although we normally associate microbial assemblages with mammalian guts, it turns out buildings have microbiomes too. For the last decade, Scott Kelley, a biologist at San Diego State University, and his fellow pioneers in the growing field of built-environment microbiology have been studying factors that shape those microbial communities and how they affect the health of people who work and live in them. “Westerners spend about 90 percent of their time indoors,” says Kelley. “We would like to know exactly what’s in there and who’s growing. Is it dangerous? How different is it from the outside?” 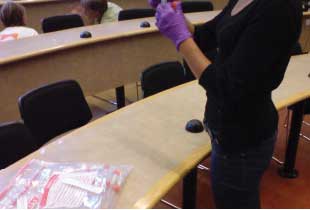 JEFF KLIINEAs a postdoc in the lab of Norman Pace at the University of...

Kelley and colleagues at Northern Arizona University (NAU) and the University of Toronto took on the challenge. They designed an experiment to zero in on the influences of geographic location, position within a room (floor, wall, or ceiling), occupants of the room, and type of building material. For a year, 11 people in Toronto, San Diego, and Flagstaff, Arizona, worked in offices with swatches of drywall on the ceiling, carpet on the wall, ceiling tile on the floor, and so on. Each of the three materials was mounted in each of the three locations in three rooms per building. Sensors mounted with the swatches kept track of the rooms’ temperatures, humidity, and even occupancy. The team sampled each of the swatches periodically throughout the year. Although the inhabitants of each room were instructed not to touch the swatches, the researchers also collected microbiome samples from the skin, noses, mouths, and stool of each individual working in the nine offices, as well as from the researchers taking the samples.

The researchers amplified 16S ribosomal RNA gene sequences from the samples to get a picture of what bacterial and fungal taxa occupied each swatch at different times throughout the year. It took another year for the study’s first author, then NAU graduate student John Chase, to analyze the mountain of sequences representing microbial communities present on each surface, in each location, at each time point (mSystems, 1:e00022-16, 2016). He found that microbiome richness on the swatches was mainly influenced by their location within a room and the offices’ geographic locations. Not surprisingly, swatches kept on the floor collected larger and more diverse microbiota—due to gravity, Kelley says. The drivers of city-specific differences were harder to nail down. The Flagstaff offices, for example, had microbiomes that were more phylogenetically diverse compared with those of the other two locations, but it’s not clear if this reflects differences between the cities’ microbiomes or differences in exposure to outdoor microbiota. However, since each of the three offices in a given city had different numbers of windows and occupants, Kelley says geography is likely a stronger factor than outdoor exposure.

The relationship to geographic location was consistent with what Kelley and others have reported before, as were the most frequent phyla identified: Proteobacteria,  Firmicutes, and Actinobacteria. Using machine-learning techniques, Chase and his colleagues found they could use microbiome data to accurately predict the city of origin for their samples 85 percent of the time.

The biggest identifiable source of microbes in the swatch communities was the skin microbiota of the humans using the room. Human skin bacteria made up 25 percent to 30 percent of the swatch microbiomes, even though there was no direct contact between office inhabitants and the test surfaces. Instead, microbes were likely shed from office workers’ microbial clouds, the constellation of fungi, bacteria, and viruses that encircles each one of us. Regardless of which surfaces the microbes landed on, once settled they stayed largely the same. In fact, the main variable the team was interested in—building material—had no influence on microbiome composition or richness. “These surfaces are just sort of inert,” says Gibbons; built environments are pretty much just passive accumulators of microbes.  “It’s like we’re living in these inert boxes.” And the microbiology that is present is largely derived from humans, “so we’re sort of stewing in our own microbial soup. That might be a bad thing.”

Aside from things like toxic mold, Gibbons says, the relationship between built-environment microbiomes and human health is largely undefined. For example, it’s unclear how built-environment microbiome compositions mesh with the hygiene hypothesis—the idea that a dearth of exposure to outdoor microbes contributes to higher incidences of autoimmune and allergic disease. “[Built environments] act as barriers between us and the types of microbial diversity we should be exposed to, especially during childhood when our immune systems are developing,” says Gibbons. It’s not clear whether some indoor microbiomes could exacerbate or remedy this issue.

Although his study provides a good springboard from which to launch further indoor microbiome research, Kelley is not ready to discount building material as an important variable just yet. “If it’s normally a dry indoor place, we’re seeing that you’re not getting much difference between the materials,” he says.  “Once they get wet, though, that’s a totally open question.” He and his colleagues intend to test which microbes will populate building materials once they get wet or start to break down.

According to Jessica Green, director of the Biology and the Built Environment Center at the University of Oregon, building-material composition may matter for high-touch areas, such as countertops in hospitals. “We know that in health-care environments, design commonly steers away from carpets,” she says. “There is some evidence to suggest that there’s a lower risk of infection in a high-copper environment, for example.”

It is also possible that building material could influence microbial gene expression or viability.  “[16S ribosomal RNA gene sequencing] gives you a picture of all microbes that are on a surface, whether they are dead, dormant, or alive,” says Green. Focusing on living or metabolically active communities could give totally different results. “There are all kinds of directions that this research could go.”