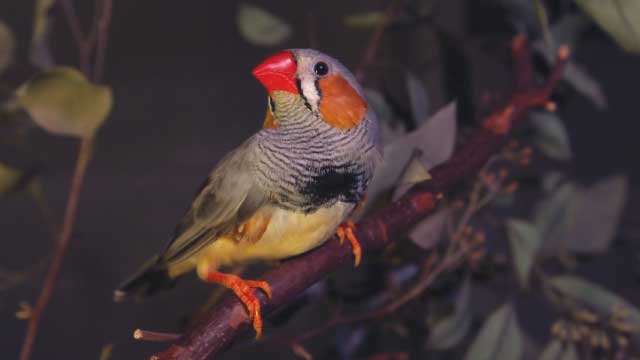 TWEET, TWEET: The zebra finch (Taeniopygia guttata) is fast becoming an important model for the study of neurodegenerative diseases.COURTESY OF MASASHI TANAKA

Richard Mooney’s grandfather, a mechanical engineer, couldn’t imagine why birds would be useful for understanding the human brain. “The same way that taking apart a one-cylinder lawn mower can prepare you for how a supercharged V8 in a Formula One racer works,” explained Mooney, a neurobiologist at Duke University Medical Center. In fact, striking similarities between songbird and human brains are now driving bird neurobiology research in a new direction: the study of human neurodegenerative diseases.

Songbirds and people share the rare ability to learn vocal patterns through imitation, a skill driven by similar brain areas that have functionally converged over evolutionary time. This is true even at the genetic level, as Mooney’s Duke neurobiology colleague Erich Jarvis demonstrated in 2014. Songbird gene expression in...

One of these regions, known as Area X in birds, is a basal ganglia subarea dedicated to song learning. In the most common laboratory songbird, the zebra finch (Taeniopygia guttata), Jarvis and others have shown that dopamine sent to Area X from the midbrain plays a key role in song variability. When not in the presence of females, male finches sing “undirected songs,” perhaps to practice, that are more variable than the songs they use to attract mates. The less variable, female-directed songs are accompanied by an influx of the neurotransmitter dopamine into male basal ganglia neurons (Eur J Neurosci, 25:3406-16, 2007). That finding is intriguing for researchers interested in speech defects associated with the neurodegenerative disorder Parkinson’s disease, which is marked by both a loss of dopaminergic neurons and basal ganglia damage.

SONG LINES: The stable trajectories of learned vocal sequences of a zebra finch (left) were destabilized after viral expression of a causal gene of Huntington’s disease in a vocalization-related region of the basal ganglia (right). COURTESY OF MASASHI TANAKAScientists have only recently begun to pin down the effect of a Parkinson’s-like loss of dopamine in songbirds. Sam Sober and his colleagues at Emory University in Atlanta found that treating the basal ganglia of adult Bengalese finches (Lonchura striata) with the neurotoxin 6-hydroxydopamine, which destroys dopaminergic neurons, causes defects in vocal learning (J Neurosci, 36:2176-89, 2016). University of Washington neurobiologist David Perkel hails the study as the “first direct evidence for dopamine in learning.” Previously, neurobiologists Stephanie White of the University of California, Los Angeles, and Julie Miller, now at the University of Arizona, found that 6-hydroxydopamine reduced vocal variability during undirected song, when the finches should have produced more-variable songs (Physiol Rep, 3:e12599,  2015). People with Parkinson’s also speak in a more monotonous tone, but how dopamine affects this symptom is unknown.

Current finch models of Parkinson’s rely on neurotoxin-induced lesions in specific brain areas, not genetic mutations associated with the disease in people. However, Parkinson’s affects the entire brain—not just the basal ganglia—as well as peripheral nerves, muscles, and gut, says neuroscientist Michelle Ciucci of the University of Wisconsin School of Medicine and Public Health. Her work on speech and swallowing defects in Parkinson’s patients and in rodent models of the disease has shown that dopamine replacement doesn’t noticeably improve speech quality in Parkinson’s patients, suggesting that a dearth of the neurotransmitter is not the sole cause of these deficits (Semin Speech Lang, 34:185-202, 2013). Because genetic models can better recapitulate the progression and wider effects of Parkinson’s, Ciucci advocates using a combination of these models—including both rodents and finches—to understand the biology of the disease.

Singing, like speech, is a complex voluntary motor skill of exactly the kind that becomes overactive and uncontrolled in Huntington’s, and the well-established connections between brain circuits and singing behavior make the finch an ideal system to examine how the mutant gene disrupts these patterns. Mooney’s group found that the expression of mutant huntingtin in the basal ganglia alone was sufficient to make birds sing more abundantly, but with the stereotypical syllables of the song mixed up (PNAS, 113:E1720-27, 2016).  “It’s really nice work and is very suggestive that this could be a great model for understanding the pathogenesis of Huntington’s disease,” says Perkel.

Intriguingly, Mooney found that some of the finches were eventually able to recover some of the correct order to the syllables in their songs, which may be due to their lifelong ability to generate new neurons in this part of the brain. This result agrees with an earlier finding from the Jarvis lab that finches could partially recover from a neurotoxin-triggered lesion in Area X by forging new neurons, but were left with a stutter in their song (Sci Rep, 4:6590, 2014). The mechanism and purpose of adult neurogenesis in these areas—which doesn’t appear to occur in people—is still poorly understood, but uncovering its basis might eventually lead to therapies for humans with neurological damage, Jarvis suggests.

Stephanie White agrees. “For a uniquely human disorder, you’re never going to be able to find a perfect animal model,” she says. “My hope would be that groups of researchers who have expertise across different models could collaborate.”