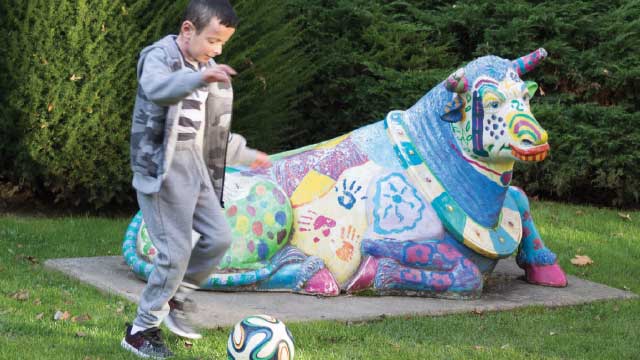 NEW SKIN: A boy was dying of a genetic skin disease until researchers transplanted skin grafts that had been genetically modified to correct the mutation.© RUHR-UNIVERSITY BOCHUM

Thanks to an international team of scientists and doctors, a young Syrian refugee who lost most of his outer skin to a life-threatening genetic disease now has a transgenic replacement, derived from his own cells, covering approximately 80 percent of his body. And, as the team documented November 8 in Nature, he’s doing well.

“The work provides in-depth, novel information on skin stem cells and demonstrates the great potential of these cells for treating a devastating disorder,” says Alessandro Aiuti, a professor of pediatrics at the San Raffaele Scientific Institute in Italy who was not involved in the study.

“[It] establishes a landmark in the field of stem cell therapy,” Elaine Fuchs, a skin scientist at the Rockefeller...

Epidermolysis bullosa is a genetic disease in which mutated connective proteins prevent the epidermal layer of the skin from attaching properly to the underlying dermis. The result is skin that readily blisters, causing large, chronic wounds and immense pain to the patient. Sufferers are also at an increased risk of infections and skin cancer; in severe cases the disease can be lethal.

In the summer of 2015, regenerative medicine specialist Michele De Luca of the University of Modena and Reggio Emilia in Italy was contacted by doctors in Germany regarding a young Syrian boy with a very severe form of epidermolysis bullosa. The cause was a mutation in the gene encoding laminin b3, an extracellular matrix protein that controls, among other things, the anchoring of epidermal cells.

After arriving in Germany with his family, the boy’s condition had significantly deteriorated—De Luca suspected because of the family’s distressing relocation, the resulting lack of consistent clinical care, and the family’s language difficulties. Suffering a double bacterial infection, the boy had been admitted to the Children’s Hospital of Ruhr-University in Bochum where the infections ultimately led to the loss of approximately 80 percent of his epidermis. His chances of survival were so slim that palliative care was considered the only option.

De Luca had previously performed two proof-of-principle transgenic cell therapies on patients with epidermolysis bullosa, both of which had been limited to small patches of replacement epidermis—nothing close to the scale the boy would require. But because of his poor prognosis, his parents gave their consent for expanding the experimental treatment on their son, and the authorities quickly granted approval on compassionate grounds.

A biopsy was taken from what remained of the boy’s undamaged epidermis and, from this, keratinocytes were extracted, expanded in culture, and then transduced with a retroviral vector carrying the full-length, healthy version of the laminin b3 coding sequence. The cells, which grow in sheets, were then further expanded until enough sheets were produced to cover the boy’s limbs and torso. They were transplanted in two operations performed in October and November of 2015. A third, smaller operation in January of 2016 filled in most of the remaining gaps.

In the weeks that followed the operations, the transplanted cells proliferated to close the wounds. In the months that followed, skin biopsies from the boy showed that his new skin adhered firmly to the underlying dermis, and had normal morphology and levels of laminin b3. His skin also appeared to have normal elasticity and wound-healing behavior. Now, two years later, the boy’s skin still functions as it should without blistering or itching.

The boy’s experience revealed novel insights into the way keratinocytes regenerate. Each month, human skin is entirely replaced with new cells, but whether this renewal is the result of a large population of equally potent progenitor cells or of a smaller number of individual stem cells that dominate regeneration has been hotly debated.

If the former situation were true, the authors argue, then genomic sequencing of the boy’s skin biopsies would have revealed that each contained thousands of different genotypes—the result of random integrations of the viral vector into each cell. As it was, they contained only a few hundred, strongly supporting the latter theory.

“Both theories were valid, but what had been lacking was real proof in vivo, in patients,” says Aiuti. “Now we have it.”

The presence of hundreds of genotypes in each biopsy was also a good sign that a variety of cells were present in the boy’s transgenic skin and that no particular genotype dominated (a sign of a potentially cancerous growth advantage).

Because of the random integration of retroviral vectors and the possibility of a resulting cancer-causing mutation, there has been concern about their use for gene therapy. But, says De Luca, the cells of patients with epidermolysis bullosa already “are extremely prone to cancer,” so by replacing their diseased cells with functional transgenic ones, “we might even decrease the risk.” Futhermore, should a cancerous event occur, he says, “this would be easily identified because it is in the skin.”

Even with the theoretical chance of cancer, “this is a disease that is so devastating to children that it is worth the risk,” says skin biologist Valerie Horsley of Yale University who was not involved with the study.

To date, there have been no indications of cancerous events in the now nine-year-old patient, nor in the two patients who previously received the smaller-scale therapies—in one case, “even after 12 years,” says De Luca.

A version of this story was published at the-scientist.com on November 8, 2017.