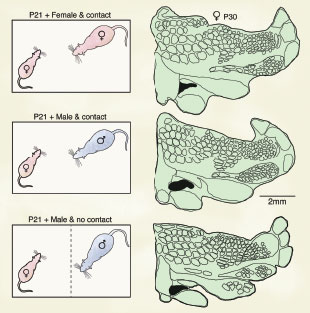 ACCELERATED DEVELOPMENT: In prepubescent 21-day-old female rats, the genital cortex region (black) of the somatosensory cortex exhibits accelerated growth when the young female is exposed to touch and contact with a sexually mature male (right, center panel). After nine days of exposure, the genital cortex of the young rat is the same size as that of a fully mature sexual female. PLOS BIOLOGY, 15:e2001283, 2017Contrary to the longstanding belief that puberty is largely controlled by hormones, new evidence shows that sexual touch is a powerful puberty promoter. Touching prepubescent female rats’ genitals can cause the brain region that responds to such tactile stimuli to double in size and their bodies to show signs of puberty up to three weeks earlier than nonstimulated females, according to a report in PLOS Biology on September 21. The study reveals the hitherto unappreciated influence of physical sexual experience on the young brain...

“The dominant idea has been that puberty is controlled in the brain and in behavior by the release of hormones . . . but there has been a smattering of findings over the years that additional environmental influences effect puberty and the onset of sexual behavior,” says Dan Feldman of the University of California, Berkeley, who was not involved in the study. This new work “suggests that maybe this is true and that actual tactile stimulation can be something that accelerates the onset of puberty,” he adds.

Puberty in mammals is a period of dramatic changes not just to the body, but to behavior and brain function. Indeed, one of the most pronounced changes, recently observed in both male and female rats, is the doubling in size of the genital cortex, which is a part of the larger somatosensory cortex—the brain area associated with physical sensation.

But these brain, behavior, and body changes are not simply an age-dependent process. Mammalian puberty can also be under strong social control. In an earlier study, exposure to male pheromones and physical interaction with males was shown to accelerate puberty in young female mice, for example.

Michael Brecht, a neuroscientist at the Bernstein Center for Computational Neuroscience in Berlin, who with colleagues had previously reported the puberty-associated expansion of the rat genital cortex, wondered whether this dramatic brain change might occur in response to physical interactions, and if so, whether it might be linked to the male-induced accelerated puberty found in female mice.

To find out, he and his team housed prepubescent female rats (21 days old) either with an older male rat or in a cage where an older male could be seen, heard, and smelled, but not touched. These conditions were designed to distinguish the effects of direct tactile stimulation from exposure to pheromones only.

They found that after co-housing the females with a male for one week, the now 30-day-old females had genital cortices the size of fully sexually mature females (50 days old), while those females not in contact with the male had only mid-sized cortices. Co-housing with a male also accelerated the physical signs of puberty in the females—namely, an increased uterine weight and vaginal opening—compared with those in the noncontact cages.

To figure out just what it is about physical contact that might accelerate puberty, the team examined whether touch alone, without a male, could recapitulate the effects. Stroking the young female rats’ genitals with a small brush held by one of the researchers produced similarly accelerated genital cortex expansions and physical signs of puberty.

The team went on to show that inhibiting the activity of neurons in the genital cortex using a locally applied neurotoxin prevented both neurological and physical signs of puberty in young female mice co-housed with older males. The authors interpret this result to mean that neural activity in the genital cortex may not only expand in response to a sexual stimulus, but be necessary for puberty to progress.

These first sexual experiences, I think, change the brain in a very profound way that we are only beginning to understand.—Michael Brecht, Bernstein Center
for Computational Neuroscience in Berlin

“I think [our work] puts more emphasis on sexual touch as a regulator of brain development and of puberty,” says Brecht. “These first sexual experiences, I think, change the brain in a very profound way that we are only beginning to understand,” he adds. That said, Brecht’s team found that sex hormones were still essential for genital cortex expansion in puberty.

“It’s a potentially important paper,” says Barry Komisaruk, a psychologist at Rutgers University, “because it’s showing that sensory stimulation and hormonal activity can influence the structure and function of the brain.”

This new work “provides insight into the possible mechanisms underlying the widely observed, but poorly understood, phenomenon of puberty occurring about a year earlier in girls who have been sexually abused,” says psychiatrist Jay Giedd of the University of California, San Diego. The caveat, of course, is that these studies were in rats and such experiments would obviously be impossible to conduct in humans. Nevertheless, Giedd adds, “it would be really amazing if this mechanism only occurred in rats.” (C. Lenschow et al., “Development of rat female genital cortex and control of female puberty by sexual touch,” PLOS Biol, 15:e2001283, 2017.)

A version of this story was published at the-scientist.com on September 21, 2017.