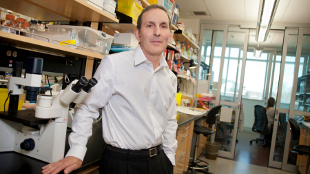 Daniel Drucker, Samuel Lunenfeld Research Institute at Mount Sinai HospitalIMAGE COURTESY OF ANNIE TONG, MOUNT SINAI HOSPITALIt’s hard to describe the feeling that washed over me when a discovery I’d made with colleagues in Toronto in 1995 translated earlier this year into the first real meaningful treatment for patients with short bowel syndrome in the history of this disease.

We were not the first to make the connection between glucagon and bowel growth—that happened in 1971—but we re-produced the same observation, identifying GLP-2 (a gut hormone) as the active peptide critical to the development of a new drug, called teduglutide, or Gattex, manufactured by the company NPS. Our drug discovery, which began with a moment of serendipity almost 20 years ago, finally became available to patients this year.

Short bowel syndrome occurs in patients who have had half or more of their small intestine removed. As a result,...

It is extremely difficult for patients with short bowel syndrome to live normal lives. Seventy percent of people with the condition are unemployed due to daily struggles, such as the need for intravenous feeding to stay nourished. Another huge concern for patients who rely on IV nutrition is infection near the catheterization site. Up until now, the main treatment for short bowel syndrome has been intravenous nutrition and the limited use of oral rehydration solutions. Teduglutide is a potentially transformative drug because it can help the intestine absorb food, thereby reducing the need for intravenous nutrition and giving patients at least a part of their lives back.

My colleagues and I initially stumbled across the link between glucagon production and intestinal growth when we tried to make an intestinal cell line in mice with tumours that expressed a particular gut hormone. We noticed that in these particular mice, the intestines were abnormally large, almost two to three times normal size. We made the connection between gut growth and glucagon levels and studied the glucagon gene to figure out which hormone was responsible for this intestinal growth. And that’s when we discovered the action of GLP-2, the native peptide used to develop the analog teduglutide, the new drug therapy developed by the company NPS.

Approximately 10,000 to 15,000 North Americans are currently affected by short bowel syndrome. The feeling that our work was fundamental to the development of a drug that will help thousands, however rare this patient population, is pretty special. In fact, not many people are even aware of short bowel syndrome—the drug is classified as an “orphan drug” when it was approved recently by the US Food and Drug Administration (FDA). Patients now have access to the drug in the United States beginning in the first quarter of 2013.

For patients with short bowel syndrome, the new drug is essentially a type of hormone replacement therapy. For those have lost a major portion of their gut, or have had it removed due to surgery, the body fails to produce the gut hormone, GLP-2, which is essential for digestion and absorption of essential nutrients, water and vitamins. The drug teduglutide promotes repair and normal growth of the intestine and increases nutrient absorption in patients with this condition. Due to the drug’s potential side effect on the large bowel, patients also need to be monitored for colon cancer while on this treatment.

However, 1 in 7 patients treated to date with tedglutide have successfully managed to discontinue intravenous nutrition, which has completely changed their lives. These were people who had to plan their days and nights, and their entire lives, around their condition. For a scientist interested in translational medicine, it is a dream come true to see a discovery made in the lab make it to the market where it will have a profound impact on the lives of patients.