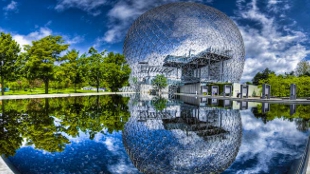 A biosphere designed for the 1967 World Expedition on St Helen's Island in Montreal, QuebecWIKIMEDIA, RENE EHRHARDTRecall the biosphere experiments from the 1990s, the most famous of which was perhaps Biosphere II. Philanthropist Ed Bass provided $200 million to construct the largest completely enclosed ecosystem ever created. Biologists and engineers spent 4 years designing and landscaping Biosphere II to have all of the systems needed to sustain life: agriculture for food production, rainforests to regulate the artificial atmosphere, even a mini-ocean to control temperature. On September 26th, 1991, eight researchers were locked inside the airtight, closed environment. Almost immediately after, levels of CO2 inside Biosphere II began to skyrocket and fluctuate wildly. Levels of oxygen began a precipitous decline from 21 percent to a dangerously low 14 percent. Most of the vertebrate species and all of the pollinating insects died within a year, and pests like cockroaches...

Whether one views Biosphere II as a monumental failure or magnificent learning experience, it was a sobering reminder that we still don’t have even a basic understanding of how to design a biological system that can sustain human life. Obviously, this means we’re not yet in a position to put a human colony on Mars. More importantly, it means we don’t yet understand how to live sustainably on our own planet. Earth, like Biosphere II, is a materially closed ecosystem. Nothing is lost, and nothing is gained. And nearly everything that is required to sustain human life is made available by other living organisms. Without photosynthetic bacteria and plants, there would be no breathable atmosphere. Without microbes, fungi, and animals, there would be no soil to grow crops, and nothing to pollinate those crops if they did exist. Without these essential players in our planet’s global ecosystem, the oceans would have no fish, and forests would have no wood. There would be no fossil fuel, no renewable biofuel, and even if we had fuel to burn, there would be nothing to clean the pollutants from combustion out of the water we drink or the air we breathe.

Nature has provided the goods and services needed to sustain human life for so long that most people take them for granted. But growing evidence suggests that Earth’s natural capital, and the biological diversity that underpins these goods and services, are being eroded. Some even claim that Earth is in the midst of a 6th mass extinction. Though this claim is a bit misleading—over the past 400 years, we’ve lost 1-13 percent of known species, compared with 75 percent or more lost during the five prior mass extinctions—the concern is not about the total number of species that have already gone extinct. Rather, the concern is how quickly species are being lost—and we are losing species faster than ever. In the fossil record, we normally see one species per thousand go extinct every millennia. Rates of extinction in the past century have increased to 100 to 1,000 times faster than normal. Add to this the abnormally high number of threatened and endangered species, and projections suggest we could truly reach the point of a mass extinction in 240-540 years.

So what? Beyond conserving species for the sake of biodiversity, does it matter if a large fraction of Earth’s life forms cease to exist in the next few centuries? Biologists have spent much of the past 20 years addressing this very question, and they have now run more than 500 experiments in which they have simulated the extinction of species in nearly every major biome on Earth. Results have been surprisingly consistent. Whenever ecosystems lose species, they generally become less efficient and less stable. Less diverse communities are not as good at capturing biologically essential resources like sunlight, water, and nutrients. In turn, the growth of plants slows, as does the animals that eat the plants. Less diverse systems are also less efficient at decomposing waste products and recycling essential nutrients; thus, they become more “leaky.” Less diverse ecosystems tend to be more variable through time, which causes them to exhibit greater fluctuations and higher levels of unpredictability. Collectively, these things cause ecosystems with fewer species to be less efficient and reliable at providing society with many fundamentally important goods and services, like the provision of crops and fisheries, control of many types of pest and disease, production of wood, and the ability to remove carbon from the atmosphere, to name a few.

On the other hand, it’s important to acknowledge that biodiversity is not always “good” for society. Biodiversity is, after all, the very reason we have antibiotic resistance. There is also no evidence to suggest we must conserve all species to maintain ecosystem services. Species have come and gone throughout Earth’s history, and yet, higher life continues to exist. Furthermore, humans have shown a unique ability to develop low diversity systems through domestication and bioengineering that can provide select products and services quite well.

Even so, it is naive and dangerous to ignore our fundamental dependence on other life forms. It is clear that the loss of certain key species can have strong impacts on biological processes, and while it is sometimes obvious which species play the biggest roles, other times we don’t realize their importance until they are gone. It is also naive and dangerous to think we can bioengineer a planet that will be able sustain the growing human population. If we were unable to build a life-support system that could support 8 people in Biosphere II, who believes we can engineer a planet able to support 9 billion?

We are taking the very genes and species that have made Earth an inhabitable and biologically productive planet over the past 3.8 billion years, and we are lining them up on the edge of a cliff from which there is no return. If the ever growing human population is to continue to prosper, we must better appreciate how our own well-being is directly linked to the great variety of life that is the most striking feature of our planet.

Bradley J. Cardinale is an associate professor in the School of Natural Resources & Environment at the University of Michigan, where he is director of the school's Conservation Ecology Program and teaches courses in conservation, restoration ecology, and ecosystem services. He is also an elected member of the International Council for Science's research program DIVERSITAS.