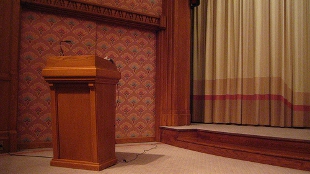 FLICKR, RICK“I didn't have time to write a short letter, so I wrote a long one instead.” -- Mark Twain

Prospects for understanding cancer, Alzheimer's disease, cardiovascular disease, and other afflictions have never been brighter. However, a class I teach on presentation techniques at Stanford University School of Medicine, and similar experiences at the UCLA Brain Research Institute and City of Hope National Medical Center, have made me aware of a communication crisis that threatens progress. While presentation techniques are important, the crisis is deeply rooted in a scientific culture that is losing sight of Mark Twain’s simple wisdom.

Multiple factors have increased the need for clearer scientific exchanges. One is sheer size of the biomedical research enterprise compared to 40 years ago. The nation’s largest annual conference on brain science had 1,396 attendees in 1971 and 32,357 attendees in 2011. The largest cancer meeting grew from 630 to 31,800 in the same period. Such large meetings make it difficult to pose questions to speakers and engage colleagues in discussions that “set off the light bulbs.” Back at the home campus, a similar growth in infrastructure size has had comparable effects. New levels of clear and effective scientific communication are needed to stand above the cacophony of daily emails, space planning concerns, and other confounding factors that accompany the enlarged research enterprise.

Increased specialization also increases this need. There is consensus that scientific progress now requires combining knowledge from different sub-disciplines of human biology. "Team Science," "multi-disciplinary," "translational," are the buzz words for this consensus. However the language of sub-disciplines is by definition more specialized and extra efforts are needed to talk across the micro-vocabularies. The growing importance of computer science and engineering in biology adds to this scientific Tower of Babel.

While these factors have increased the requirement for effective scientific communication, the actual quality of scientific communications has declined. For good, and often for bad, the slide presentation has become the most ubiquitous mode of scientific communication. Misuse of easy-to-use presentation software packages, like Microsoft PowerPoint, has eroded transparency. There is no longer a need to focus on the most important conclusions and the relevant supporting data. Today it is too easy to bring dozens, even hundreds, of slides that show every bit of data a laboratory has generated. It is not uncommon for individual slides to contain six or eight unreadable graphs. Quantity has replaced discretion.

I asked a senior scientist and friend of mine, "Why would anyone show a presentation slide with eight unreadable graphs?" He pointed out that such slides are a great excuse not to prepare. He argued that the audience would expect a thorough explanation if shown a single clearly labeled graph. This would require that the speaker dedicate time to think about what the audience needs to understand and to work out the appropriate language. An overly complicated slide can be quickly glossed over with an oral narrative that has little to do with explaining the visual. The visual and audio presentations work against each other, destroying the rationale for a slide presentation.

It is not surprising that scientists feel compelled to minimize preparation time. Researchers are pulled in too many directions. Growing infrastructure costs, coupled with declining federal research revenues, have increased the institutional pressure to obtain grants, manage bigger laboratories, and raise funds. Regulatory and administrative burdens seem to grow continually. There are academic duties to fulfill, and requests to take part in conferences, review panels, and workshops across the country. The words, "I'll write the presentation on the plane," are spoken too often.

The communication problem is not confined to slide presentations. Scientists are under intense pressure to publish and the volume of articles is overwhelming the community. The community needs to return to an old model exemplified by the renowned biologists Edward Lewis and Jacques Monod, both of whom won Nobel prizes in 1965 while publishing only selectively throughout their careers. While beyond the bounds of current academic tradition, progress would be accelerated if each scientist were limited to publishing a very small number of quality publications each year.

My monthly class on presentation techniques tells me the communications problem is broad-based and a symptom of complex challenges of scientific culture and education. Attendees represent the biomedical research spectrum: neuroscience, cancer, infectious disease, immunology, etc. Methodologically a majority are molecular or cellular biologists, but epidemiologists, bioengineers, and behavioral researchers are well represented. They are outstanding young scientists at early points in their careers. They are not shy, they speak well, and they can easily master the technical aspects of any communications tool. Where they struggle is formulating an overarching scientific question and identifying the data that brings insight to that issue. They struggle with making a convincing and understandable scientific argument. This tells me that the quantity over quality problem has seeped into our education and training programs and that mentors need to spend more time helping young scientists better understand the context for their work.

A few communications classes will not solve a problem that has developed slowly over many decades. It is rooted in a frenetic culture that overvalues the quantity of activities over purposeful scientific interchange. Progress depends on our community focusing on its most significant accomplishments and identifying the most critical challenges. It is up to our scientific leaders at the national institutes, foundations, and academic centers to recognize this problem and realign priorities and goals appropriately. Such realignment would involve both direct attention on communication techniques and greater emphasis on scientific achievement and clarity over metrics such as laboratory size, grant dollars, or numbers of publications.

David Rubenson is the associate director for Administration and Strategic Planning at Stanford Cancer Institute.