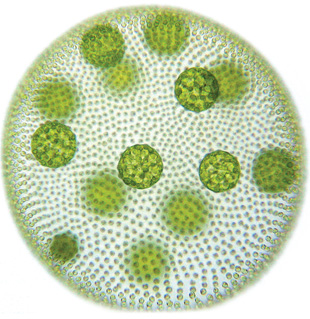 Volvox carteriCOURTESY OF AURORA NEDELCUPhysicists and biologists don’t usually mix, and when they do, things can get messy. But the University of California, Santa Barbara’s Kavli Institute of Theoretical Physics (KITP) is trying to change that. For more than 30 years, this prestigious research facility, which in 2007 was rated by a study in Proceedings of the National Academy of Sciences as one of America’s most influential research institutes, has been pairing the world’s brightest physicists with scholars from diverse fields in an effort to answer a wide-range of scientific questions—most recently, the evolution of multicellular life.

“The reason biologists are interested in multicellular complexity is not because of an ‘in principle’ thing,” said experimentalist extraordinaire Mike Travisano of the University of Minnesota, in a lecture he gave at the workshop. “We’re interested in it because it’s proven to be an avenue for adaptation and diversification.”...

These are just some of the questions the visiting scientists at KIPT are trying to answer through a 10-week workshop on cooperation at all levels of life, from the origins of multicellularity to how species and populations interact to form cooperative organizations. Some scientists, including Harvard physicist David Nelson and evolutionary biologist Joan Strassmann from Washington University, are spending weeks to months at the institute, collaborating on projects aimed at answering these fundamental questions of living organisms. And this month, these researchers and dozens of others from around the world, in fields ranging from philosophy to entomology to computer science, gathered for a 5-day conference to discuss their progress.

Travisano described his work, performed in collaboration with his postdoc Will Ratcliff, generating multicellular yeast and green algae from unicellular ones in the lab. Many researchers talked about their work with Volvox carteri and other volvocine algae—freshwater species that range in complexity from unicellular to colonial to multicellular, and are thought to represent the Rosetta stone for deciphering major evolutionary transitions in individuality. Bradley Olson, from Kansas State University, has been sequencing volvocine genomes—most recently that of the 16-celled colonial alga Gonium pectorale—and has identified candidate genes, such as cell-cycle regulators, that he believes give rise to multicellularity. In his talk, Olson described an experiment where he and his collaborators took a cell-cycle regulatory gene from a colonial alga and inserted it into a mutant unicellular one, producing a colonial morphology. This suggests that modifications to the cell cycle may be crucial for transitioning from a unicellular to a multicellular lifestyle.

Other workshop participants, such as renowned evolutionary ecologist Joan Roughgarden, are taking concepts from economics to understand cooperation within species. During her KITP seminar, Roughgarden displayed stunning photographs of courtship feeding in sea birds and nuptial gifts between copulating katydids, and then helped explain these intimate social interactions using a well-known economic theory.

And still other researchers are looking at cooperation at the sub-cellular level, investigating how proteins and nucleic acids interact to form complex structures. In his talk, Niles Lehman of Portland State University elegantly described his team’s work on ribozymes, showing how a fragmented piece of RNA can replicate itself, and giving insight the nature of our planet’s earliest replicating molecules. Similarly, Harvard biophysicist Eugene Shakhnovich and population geneticist Michael Lynch from Indiana University each presented models for the evolution of molecular cooperation. “One way to release evolutionary constraints is multicellularity,” said Shakhnovich. “It’s a way for evolution to divide labor.”

Through these and other talks—and the unofficial discussions that took place throughout the day in the institute’s hallways, lounges, and sunlit courtyard—one can’t help but feel that the study of cooperation and multicellularity is poised for major advancements, which will no doubt be forthcoming only by the collaboration of researchers from a broad range of disciplines. Ray Goldstein, a physicist from the University of Cambridge, put it best as he described his introduction to the field 8 years ago, when a PhD student in biology knocked on his door of his University of Arizona office with a question about fluid mechanics and how this might be impacting multicellularity in Volvox. Ray had never heard of Volvox, but it piqued his interest and ever since he’s been collaborating with biologists trying to unravel the physics behind multicellularity.

David Smith is a Killam Postdoctoral Scholar in the botany department at the University of British Columbia. He recently visited KITP for a weeklong conference as part of the KITP program on cooperation and multicellularity.