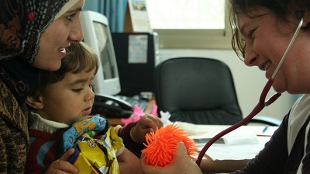 WIKIMEDIA, PHR-ISRAELThe greatest obstacle to the care and control of diseases in the developing world is the absence of accurate and affordable diagnostic tests. This deficit can cause delayed diagnosis that lead to less effective and more expensive treatments, as well as the spread of disease to others. Worse, lack of sufficient diagnostics can result in misdiagnoses, improper treatment, and sometimes death. And even when diagnostics are available, they are often too costly, or at least more costly than the drugs to treat a perceived disease, further contributing to drug resistance.  The net effect is endangered lives, wasted resources, and the potential to create an even bigger health problem.

There are many challenges to achieving a successful diagnostic.  Being inexpensive alone is not sufficient.  It also has to be able to perform to high standards in challenging settings, such as villages across much of Africa where a small percentage of health facilities have access to a reliable power supply or towns and villages in the Indian subcontinent...

The potential to create inexpensive and effective diagnostic tests from a technological point of view should be achievable, however.  For example multiple tests for malaria and HIV, costing less than $1 each, have been developed.  Unfortunately, for more complex diagnostics offering testing for multiple diseases, especially those common in challenging environments, there are insufficient financial incentives to drive the development.

In developed countries, where there is a clear pathway for access to profitable markets, manufactures are willing to make investments in diagnostics.  In contrast, there are multiple obstacles to achieve commercialization in the developing world, such as a complex regulatory approval landscape, weak health systems, and a chronic lack of funding for procurement in the public health sector.  Indeed, diagnostics represent a tiny portion of healthcare spending.  Malaria diagnostics, for example, received a mere 0.3 percent of the total malaria R&D funding in 2007, which increased notably in 2009, but still comprise less than 2 percent of the budget.  This level of support remains well below what is required for successful advancement of the field.  As effective diagnostics are required to support the development of other malaria control tools, a lag in diagnostic development will further impede the impact of investments elsewhere.

Furthermore, the successful development and roll out of point-of-care (POC) diagnostics is dependent not only on adequate funding, but also on the collaboration of many stakeholders, including the companies developing the products, the healthcare industry, and local governmental health ministries.   Recognizing this need, the Foundation for Innovative New Diagnostics (FIND) was created in 2003 as a Product Development Partnership (PDP).  Its mission is to develop and deliver innovative and affordable POC diagnostic tests for poverty-associated diseases, such as tuberculosis, malaria, sleeping sickness, leishmaniasis, and Chagas disease.

To accelerate the development process, FIND maintains strong collaborations with a host of entities—manufacturers, academics, health organizations, donors, and ministries of health—and works with researchers from the initial design of a diagnostic test to its implementation in an endemic country. In tuberculosis, FIND's leadership role has resulted in the refinement and implementation of a diagnostic cartridge that provides countries with improved testing results. Within a year of its endorsement by the World Health Organization, more than 600,000 cartridges were procured by some 75 countries. FIND also recently announced the launch of the first rapid test for sleeping sickness.  This test has the potential to dramatically alter the manner in which the disease is managed by bringing a cost effective and easy testing to patients who often live in rural setting with minimal health infrastructure in sub-Saharan Africa.

The use of inefficient diagnostics is an unacceptable situation that denies effective treatment to millions and places an enormous burden on health costs in those countries that can least afford it. Novel diagnostics permit measurement of the impact of programs designed to deal with these diseases.  Diagnostics allow for a baseline to be established and to track progress—you cannot manage what cannot be measured—and play an important role in the healthcare value chain.  There is no proper health intervention without the proper diagnosis.

Mark Kessel is a partner of Symphony Capital LLC a private equity fund focused on drug development financing and Vice Chairman of the Board of Directors of FIND.