WIKIMEDIA, FACEBOOK.COMSocial media is a powerful tool that can galvanize public support for conservation action. In a letter published in Science last October, researchers used an example of animal abuse in the context of the illegal wildlife trade to highlight the power of social media in bringing public attention to conservation issues (L. T. P. Ngiem et al., Science, 338:192-93, 2012). Based on our experience with Facebook, however, we caution that people are more likely to respond to issues that affect them on an immediate emotional level, which appears to be limited to certain aspects of conservation.

In 2011, we established a Facebook page  to increase awareness of Malaysia’s wildlife and conservation issues, with 107 posts related to deforestation, poaching, human-wildlife conflicts, and species over a one-year period (August 2011–August 2012). According to Facebook Insights, which provides metrics on content consumption, our page content reached a mean...

On August 13, 2012, we “shared” a local tour operator’s photograph of snorkelers harassing an endangered green turtle (Chelonia mydas)—our first post depicting animal abuse. The post went viral, and by the following day reached 63,631 unique people (see graph), a staggering 405-fold increase in our daily total reach. The issue drew the attention of the media which featured our page. There was a public outcry, the Malaysian Fisheries Department investigated the incident, and the tour operator issued a public apology.

We wanted to test whether public concern for biodiversity conservation would increase after this sudden influx of attention. One week later, we posted a photo of tiger claws being sold in our local market. This story only attracted 1,075 unique people (see graph). 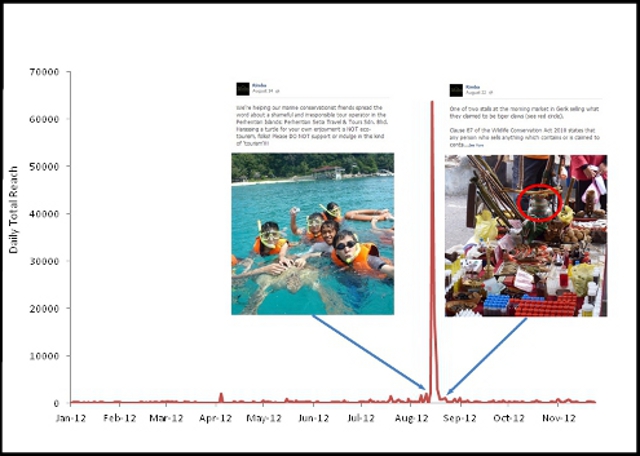 Our observations on engaging the public through conservation messaging on Facebook suggests that social media platforms are most useful when they engage the public on a personal, emotional level. This is easier for conservation issues that cause moral outrage (e.g. animal abuse) compared to intangible long-term conservation issues (e.g. deforestation, illegal wildlife trade).

For such long-term, less immediately emotional conservation issues, social media may have a greater impact as a complementary tool in specific awareness campaigns. For example, photos of the popular Chinese ex-basketball player Yao Ming’s visit to Africa to create awareness about rhino and elephant poaching have been widely distributed on Facebook, bringing attention to the poaching crisis among netizens that otherwise might not have been reached by the usual conservation campaigns. Ultimately, we should strive towards circulating material on social media that enhances public recognition of conservation as a moral imperative.

Lahiru S. Wijedasa is a Senior Arborist at the Singapore Botanic Gardens, a Research Associate at the Royal Botanic Gardens of Edinburgh and Rimba, a non-profit research group of biologists conducting research on threatened species and ecosystems to help decision-makers reduce (or even halt) threats to ecosystems and species in Malaysia. Gopalasamy Reuben Clements is a PhD candidate at James Cook University and a Research Associate at University Malaya. Sheema Abdul Aziz and Clements are co-founders of Rimba. Ahimsa Campos-Arceiz is an Associate Professor at the School of Geography of the University of Nottingham Malaysia Campus.