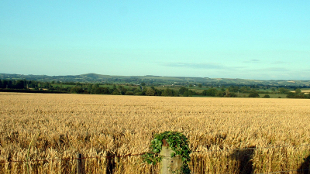 Wikimedia, Joe DIn 2007 and 2008, due in part to rapidly rising energy costs and climatic extremes, the world experienced a sweeping food crisis, with food riots observed in more than 30 countries. In 2010 and 2011, unprecedented drought in Russia reduced the global supply of wheat, with social and political ramifications for wheat importing countries around the globe. Last summer’s extensive drought in the United States, the world’s largest grain exporter, suggests that food supply will, once again, continue to be an immediate and global concern.

Since the “green revolution” of the 1960s increased crop production around the world, agricultural science has served as a bulwark against global hunger. But demands have been relentless, and there is a clear need for more. More food for a global population that, in 2011, exceeded 7 billion. More for the additional 2 billion people that will join the population by 2040....

The constraints to meeting such demands are many. Urbanization removes half a million hectares of arable land from global crop production each year; competition for water supplies between industry and agriculture leads to diminished availability for irrigating crops; and the cost of fossil fuels, necessary for growing, transporting, processing, and storing food, has staggered upwards. But topping all these challenges is the looming threat of climate change, which stems largely from an increase in greenhouse gas emissions and threatens to hinder crop production in many regions, as a result of severe droughts, heat waves and the spread of invasive species. In a recent issue of Proceedings of the Royal Society B (10.1098/rspb.2012.1005, 2012), we recognize that resources are likely to become constrained in the future; however we also recognize that one resource that plants need—carbon dioxide (CO2)—is increasing.

Since Charles Keeling began monitoring atmospheric CO2 at Mauna Loa in 1957, atmospheric CO2 has increased by 25 percent, from 315 parts per million (ppm) to 394 ppm. However, no efforts have been made to actively select for crop varieties that are more efficient at converting additional atmospheric CO2 into seed yield. In our paper we argue that there is increasing evidence that such an effort could boost yields significantly, particularly for cereal grains such as wheat and rice. This one strategy will not provide a complete solution to the emerging global food challenge, but it can serve as an example of the rapid innovation and adaptation measures possible to sustainably enhance food production. Other strategies could include selection and incorporation of genes from animals and plants that have evolved mechanisms to deal with hotter environments; new engineering techniques for more efficient water delivery; even new smartphone apps that could be used to determine, based on leaf color, when and how much nitrogen to apply.

Without question, the growing demand for crop production will provide challenges as substantial and long-term as anything faced through human history. Clearly, new scientific tools and their wise use will help ensure continued agricultural productivity in the face of global uncertainty.

Lewis H. Ziska is a Senior Plant Physiologist at the Crop Systems and Global Change Lab, of the US Department of Agriculture. Mark Howden is a Theme Leader in the Climate Adaptation Flagship of the Commonwealth Scientific and Industrial Research Organization (CSIRO).