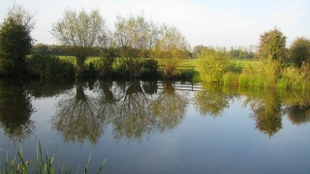 Indeed, the Des Moines die-off was not an isolated event. Fish biologists in Nebraska dealt with the deaths of thousands of dead sturgeon, catfish, and carp, and officials in Illinois reported dead large- and small-mouth bass and channel catfish. The cause isn’t a mystery. At least 62 percent of the contiguous United States experienced moderate to exceptional drought this summer. Flows of major Midwestern rivers hit record lows. In some places, such as Illinois’ Aux Sable Creek, the largest habitat for the state-endangered greater redhorse fish, the water dried up completely. For those streams, rivers, and lakes that remained, temperatures were abnormally warm, like tepid bathwater. Warm water can be...

This ongoing dilemma is bigger than just one or two exceptionally warm summers, and it is more complex than the effects of a warming climate. To an ecologist, it is clear that human modifications of the landscape play as large a role in these piscine disasters as rising global temperatures.

For millennia, the hydrologic cycle has simply worked, with water circulating through the air and ground in ways that support all life on Earth. Water evaporates from oceans and lakes, falling back to the earth as rain and snow. This same water percolates through the surface of the earth into underground aquifers. It is cooled and filtered in the process, gradually re-emerging in seeps and springs that flow into the planet’s streams and rivers, and back into its oceans and lakes.

In times of heat and drought, slow incursion of cool ground water counteract the effects of rising air temperature on our lakes and streams, sustaining surface water temperatures favorable to a diversity of aquatic life. But in the past decade, something seems to have happened to this natural temperature regulation, resulting in fish die-offs that are increasing in magnitude and frequency.

It seems that the very plumbing of our nation’s rivers, lakes, and streams is broken. The natural hydrologic connectivity of landscapes has been ruptured, blocked, and re-routed in innumerable ways—by dams, roads, buildings, agriculture, and more.

In many places, the “valves” are stuck in wide-open positions. Soggy agricultural fields are fitted with a system of underground pipes that speed water directly into drainage ditches and streams, bypassing wetlands that would otherwise gradually refill ground water reservoirs. In other places, wetlands have been filled to create manmade lakes, completely eliminating the land’s natural sponges and water filters.

The amount of hard, impervious surfaces such as concrete and asphalt exacerbates the situation.  Such pavement serves to both warm rainwater that hits its sun-baked surface and to speed the water’s journey downhill, again bypassing the natural filtration system of the soil.

We have seen fish cluster near a stream’s natural springs during a heat wave, seeking cooler water. This behavior is a visual testament to the importance of ground water to the larger ecosystem. It also, however, renders the aggregated fish more vulnerable to predators such as raccoons. Their populations are thus assaulted from yet another direction.

In addition, rapid run-off erodes stream banks and transports sediment, contaminants, and excess nutrients such as fertilizer to surface waters. As a result, streams are losing high-value species that need cold, clean water (such as brook trout), while low-value species that tolerate low-oxygen, sediment-laden conditions (such as non-native carp) are becoming more abundant.

And, as this summer’s news reports attest, in an exceptionally hot summer even tolerant species such as carp can die in great numbers.

Restoring the land and water

Restoration ecology assists the recovery of damaged or degraded ecosystems. To accomplish this goal, scientists consider all interrelated components, including the vitally important hydrological cycle, and balance the advantages of development with the resulting negative impacts on the economy—including losses associated with decimated game fish populations and the costs of declining water quality and availability.

The residential development Prairie Crossing in Grayslake, Illinois, designed by my company, Applied Ecological Services, is an example of a development and urban agricultural system that uses hydrological restoration as a guiding principle. Housing is clustered, impervious surfaces are minimized, and natural landscapes are used to guide water flow and optimize the hydrological functions within the neighborhood.

Prairie vegetation plantings reduce the need for artificial irrigation, and the deep roots of the native plant species help to recharge the water table. Restored prairies hold water in the landscape, slowly releasing it into wetlands and eventually into a manmade lake that is fed with clean, cool water. This lake not only serves the community as a fishing and swimming hangout, it also supports thriving populations of fish species listed as threatened and endangered in the state of Illinois.

This example is proof that we can use an ecological restoration paradigm to design climate change adaptations that perpetuate diversity. Mixing biological and physical metaphors, fish can be regarded as the canaries in the coalmine when it comes to climate change. Their sensitivity underscores the importance of integrating ecological and hydrological restoration in all climate adaptation plans and actions.