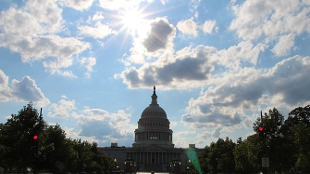 WIKIMEDIA, RCHUON24The intersection of science and technology in our everyday life continues to grow. There is seldom an issue in modern life that does not include some aspect of science, technology, engineering, and mathematics (STEM). These merging entities very often meet, in a practical sense, at the policy level when decisions are made regarding when, where, and how science will affect our society (e.g. genetically-modified foods, climate change, etc.).

Unfortunately, we have witnessed the marginalization of scientific communities in this political dialogue. In contrast to many other governments, trained scientists are underrepresented in the United States Congress; only two US Representatives—Rush Holt (D-NJ) and Bill Foster (D-IL)—hold PhDs in STEM fields. Congressional Science and Technology committees are replete with climate change skeptics. Not surprisingly, federal funding for life science research seems perpetually on the brink of budget cuts or stagnation. It stands to reason that the addition of...

The call for increased involvement is not new, and many researchers continue to advocate for greater involvement of the scientific community in policy decisions. But the question remains why so few scientists have directly entered politics. Below I detail some of the obstacles that limit this scientist-to-politician career change.

Foremost among the reasons so few people with advanced science degrees become legislators is that the number of masters and PhD science graduates is low—less than 1 percent of the US population. And of those with such degrees, even less develop the financial and professional security, in academia or otherwise, necessary for candidacy.

Unlike many other professions, the career arc of scientists is extremely long and includes remarkably few “exit nodes” to attempt a career in the political arena. Each developmental step comes in 3- to 7-year blocks that may not coincide with election cycles. Also, consider that the average tenure-track scientist receives their first NIH R01 award in their 40s. For these highly trained individuals, it becomes harder to justify a career change after building a career for so long.

Many scientists move throughout their career, taking whatever postdoc or job they can find. This nomadic lifestyle doesn't afford them time to develop deep local roots needed for election by their communities. Furthermore, scientists are not randomly distributed within the country. Instead, researchers tend to be clustered in hubs—in college towns or urban areas—where their current representation may already favor their interests and therefore pose less of a reason to run for office.

Many scientists lead research groups with people whose careers are dependent on the continued presence of the lab head. As such, a successful bid in politics could negatively impact the careers of his or her students, postdocs, and lab techs. Furthermore, funding agencies and hiring institutions have few provisions for temporary exits and potential returns to science. Unlike lawyers, for example, whose political campaigns are viewed favorably and carry the benefit of developing professional connections, scientists who pursue politics are often shunned for taking the time away from research. If the scientific community is serious about placing bright and talented individuals in policy-making positions, we need to address these career challenges with appropriate frameworks to allow researchers to run for office.

Politics is defined by relationships with the public. We should not forget that many researchers chose science for the simple fact that they prefer not to deal with people! Other aspects of the political lifestyle may also turn scientists away. In politics, for example, one does not freely experiment with multiple variables, and policy changes are usually implemented without suitable controls.

Despite the challenges, scientists interested in trying their hands at politics should still consider making the effort. Their analytical minds, as well as their writing, collaboration, and problem-solving skills, are valuable to the legislative process, Rush Holt argued in a recent commentary published in Nature. Researchers also have indirect training in economic and business fundamentals such as working with budgets, deadlines, and hierarchies. Above all, we know how to handle failure. Indeed many of the dynamics within our laboratories and departments are intensely political.

Would more scientists make for a more functional Congress? That remains to be seen. At the very least, perhaps it is an experiment worth trying.

(For those ready to make the leap to politics—whether it be volunteering a few hours each week or making a full-fledged career change—read tips for how to do it right in “The Scientist as Politician.”)