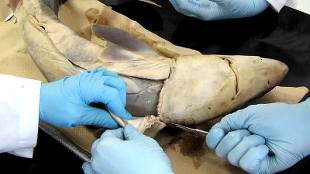 WIKIMEDIA, MATTHIEU GODBOUTA recent study out of Oregon State University suggested that school teachers in North America could be contributing to the invasive species problem by releasing the live animals they use as teaching tools. “As many as 1,000 different non-native organisms used in the classroom are being released into the wild by school teachers,” Oregon State’s Sam Chan said in a press release. As such, the study is being used by some as an argument against the use of animals in the classroom. I strongly disagree with these sentiments. The release of a handful of classroom animals is unlikely to have any major repercussions on the local ecosystem. Rather, I would venture to guess, this supposed environmental concern is merely a scare story driven by people who oppose vivisection, or the use of live animal dissection for teaching purposes.

What are we talking about here? “Oregon teachers who...

It may of course be true that Louisiana crayfish carry disease, but how many animals are actually released into the wild by this particular route?  Chan is pretty vague about the numerical extent of this grave problem.  What about the thousands of live animals indiscriminately thrown away by restaurants, fish markets, lobster pounds, regular fish consumers, anglers, and aquarium owners, who find they have a surplus of animals and decide to dispose of them into the environment? These animals may also carry disease, and probably outnumber those animals released from the classroom by several orders of magnitude.

Perhaps the concern raised over the “dangers” posed to the environment by well-meaning but careless biology teachers is merely a ruse for raising the age-old drama propagated by anti-vivisectionists, who argue that alternatives to dissection, such as computer simulations and plastic models, are just as effective teaching tool as animal dissection. But there is no doubt that the act of dissection is in itself useful. Experimentation with animal tissues such as heart or nerve muscle preparations is also very instructive.  One may be able to learn the same material from computer programs, but simulations are two dimensional and miss out on the veracity of the real thing, which certainly reinforces the learning experience.  Learning by direct observation and action is a better way to stimulate students’ interest and to deepen their understanding than teaching by rote.  There is no substitute for seeing for oneself.

But anti-vivisectionists are on a head-strong campaign to eliminate such hands-on learning. They first create an emotional climate antipathetic to any form of biology teaching by actual demonstration.  By spreading rumors about invasive crayfish destroying the native species, they are preying on the emotions of conservation-minded folk, who will be dismayed and will start agitating as school meetings and in the local press.  The anti-vivisectionists pick on biology teachers because they are vulnerable to this kind of persuasion and know that they will not be protected from it by their administrators, local politicians, or religious leaders. Newspapers, whose only instincts are to follow the crowd, will pick up the story and propagate the agitation.

But in reality, there is no evidence to suggest that local ecosystems will suffer. And even if we err on the side of precaution, there are less drastic solutions than halting the purchase of animals for teaching purposes altogether. Perhaps, for example, teachers who find they have a few crayfish left over after class can just follow the advice published in The Oregonian: take them home in a strong bag, then boil up a large pot of water. They are delicious on freshly buttered bread with lettuce and a touch of tomato ketchup and mayo.

Richard Naftalin is Emeritus Professor of Physiology at King's College London. He was trained in medicine at Glasgow University and in biochemistry London University.

For an argument on eliminating hands-on activities like dissection from the classroom, see this opposing opinion piece.