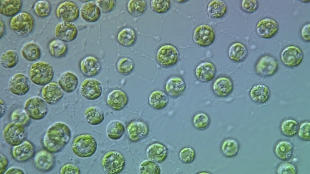 Lotharella globosa, one of the species getting sequencedYoshihisa HirakawaGet your bioinformatic boots on because the National Center for Genome Research (NCGR), in collaboration with the Gordon and Betty Moore Foundation and the international scientific community, is sequencing the transcriptomes from hundreds of the planet's most bizarre and fascinating marine algae. The results from this project, which is to be the largest of its kind ever attempted, will illuminate marine microbial diversity and its pivotal role in shaping ocean ecosystems and the air we breathe.

After receiving nominations from researchers around the world, the NCGR and the Marine Microbial Initiative advisory committee have selected 700 algae, spanning 200 genera, for transcriptome sequencing. Many of the algae that made the list are ultra-tiny species called picoplankton, which are ubiquitous throughout the Earth’s oceans and as important as the rain forests in absorbing carbon dioxide from the atmosphere. Various harmful...

All of the genetic data generated from these eukaryotic microbes will be freely available for anyone and everyone to use. Scientists who nominated and submitted algae for sequencing will have 6-months’ exclusive access to their data, after which the assembled and annotated transcriptomes, as well as the raw sequencing reads, will be deposited in public databases, including GenBank and the Cyberinfrastructure for Advanced Mircobial Ecology Research and Analysis (CAMERA). Currently, most of the available transcriptomes are limited to bacteria, animals, and land plants. The vast amounts of data that will come from the Marine Microbial Initiative are expected to open the floodgates for protist genetic research by exposing different genes that are encoded and expressed in marine algae. This, in turn, will help scientists understand how these microbes thrive in diverse environments, influence our atmosphere, and promote ocean health and productivity.

You can see a list of all the approved transcriptomes and keep track of their sequencing status at the Marine Microbial Eukaryote Transcriptome Project website. Over the next few months, the first transcriptomes will start arriving in GenBank. If you’re an algal connoisseur and genome geek like me, then you should start thinking about the interesting questions that can be addressed with these data.

David Smith is a Killam Postdoctoral Scholar in the Botany Department at the University of British Columbia, Vancouver, Canada.