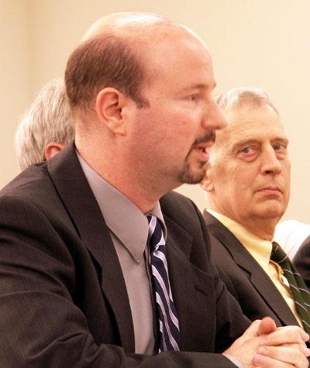 Michael Mann testifying before Congress, with National Academy of Science Chair Ralph Cicerone (July 27, 2006)NATIONAL ACADEMY OF SCIENCESAs a climate scientist, I have seen my integrity perniciously attacked. Politicians have demanded I be fired from my job because of my work demonstrating the reality and threat of human-caused climate change. I’ve been subjected to congressional investigations in the pay of the fossil fuel industry and was the target of what The Washington Post referred to as a “witch hunt” by Virginia’s reactionary Attorney General Ken Cuccinelli. I have even received a number of anonymous death threats. My plight is dramatic, but unfortunately, it is not unique; climate scientists are regularly the subject of such attacks. This cynicism is part of a destructive public-relations campaign being waged by fossil fuel companies, front groups, and individuals aligned with them in an effort to discredit the science linking the burning...

My work first appeared on the world stage in the late 1990s with the publication of a series of articles estimating past temperature trends. Using information gathered from records in nature, like tree rings, corals, and ice cores, my two coauthors and I had pieced together variations in the Earth’s temperature over the past 1,000 years. What we found was that the recent warming, which coincides with the burning of fossil fuels during the Industrial Revolution, is an unprecedented aberration in this period of documented temperature changes, and recent work published in the journal Science suggests that the recent warming trend has no counterpart for at least the past 11,000 years, and likely longer. In a graph featured in our manuscript, the last century sticks out like the blade of an upturned hockey stick.

The graph, now known as the hockey-stick graph, has become an icon in the climate-change debate, providing potent, graphic evidence of human-caused climate change. As a result, the fossil fuel industry and those who do their bidding saw the need to discredit it in any way they could, and I have found myself at the receiving end of attacks and threats of investigations, as I describe in my recent book The Hockey Stick and the Climate Wars. In 2003, Senator James Inhofe (R-OK) denounced my work on the Senate floor and called me to testify to his committee under hostile questioning. Two years later, House Representative Joe Barton (R-TX) attempted to subpoena all of my emails and research documents from my entire career, and the correspondence and files of both my senior coauthors, presumably looking for some way to both intimidate and discredit me. Inhofe and Barton are two of the largest recipients of fossil fuel money in the U.S. Congress. More recently, Ken Cuccinelli, the newly minted “Tea Party” Republican Attorney General of Virginia, took a page out of the same playbook, demanding all of my emails with 39 different scientists around the world from my time at the University of Virginia, claiming that he was investigating potential state fraud.

Meanwhile, I’ve also been subject to a constant onslaught of character attacks and smears on websites, in op-eds, and on right-leaning news outlets, usually by front groups or individuals tied to fossil fuel interests like ExxonMobil or the petrochemical tycoons, the Koch Brothers. As the journal Nature put it a March 2010 editorial, climate researchers are in a street fight with those who seek to discredit the accepted scientific evidence simply because it is inconvenient for some who are profiting from fossil fuel use.

But being the focus of such attacks has a silver lining: I’ve become an accidental public figure in the debate over human-caused climate change. Reluctant at first, I have come to embrace this role, choosing to use my position in the public eye to inform the discourse surrounding the issue of climate change. Despite continued albeit diminishing skepticism, in reality the evidence for human-caused climate change is now very strong. By digging up and burning fossil fuels, humans are releasing carbon that had been buried in the Earth into the atmosphere, where those gases are acting like a heat-trapping blanket around the planet. And storms like Superstorm Sandy and hurricane Irene, and the unprecedented heat, drought, and wild fires of last summer are the effects.

If we continue down this path, we will be leaving our children and grandchildren a different planet—one with more extreme heat, more pronounced and widespread drought, worse episodes of flooding, and greater competition for diminishing water, food, and land. Greater competition for diminishing resources at a time of growing global population, in turn, is a recipe for a national security nightmare. The worst thing we can do is bury our heads in the sand and pretend that climate change doesn’t exist. We must take action now to preserve a habitable climate for years to come.

Michael E. Mann is Distinguished Professor at Pennsylvania State University, where he directs the Penn State Earth System Science Center. He is author of the books Dire Predictions: Understanding Global Warming and The Hockey Stick and the Climate Wars.