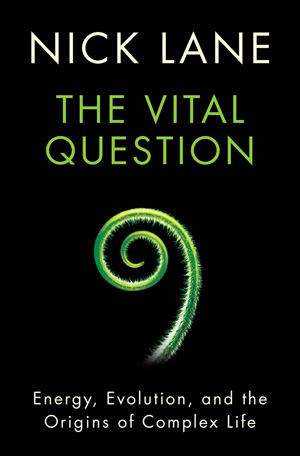 W.W. NORTON & COMPANY, JULY 2015There's a black hole at the heart of biology. Why is it that complex eukaryotic cells share so many fundamental traits, from the nucleus to meiotic sex, which are essentially absent from prokaryotes? Most people would be hard pressed to distinguish a human cell from those of a mushroom, a plant, or a zoospore. Yet those cells diverged a billion years ago, and have utterly different ways of life.

Genes point to an answer, but don't explain the whole story. All eukaryotes share a common ancestor that arose just once in four billion years of evolution. This ancestor was recognizably a modern eukaryotic cell, with a long list of characteristics inherited by its varied descendants, including straight chromosomes, introns and exons, nuclear pore complexes, dynamic cytoskeleton, endomembranes, sex, and mitochondria.

Phylogenetics also point to a chimeric origin of eukaryotes. Long before that common...

So what happened? In my latest book, The Vital Question, I argue that the answer lies in energy—specifically, the totally unanticipated mechanism of membrane bioenergetics. Essentially all cells rely on electrochemical ion gradients (usually proton gradients) across membranes to drive the synthesis of adenosine triphosphate (ATP). Autotrophs rely on membrane bioenergetics to drive carbon fixation, too. In fact, all carbon and energy metabolism depends on proton gradients across membranes.

The fact that proton gradients are as universal as the genetic code suggests an ancient origin. But for all the meticulous elucidation of the crystal structures of respiratory proteins, and the explosion of genomic data that's beginning to reveal the landscape of early evolution, we have little idea why all life relies on membrane bioenergetics, or how energy influenced evolution.

I submit that membrane bioenergetics constrained the whole trajectory of life. Almost all autotrophs fix CO2 using hydrogen gleaned from somewhere (water in the case of oxygenic photosynthesis). The straight reaction of hydrogen with CO2 drives the simplest and probably earliest metabolic pathway known, the acetyl-CoA pathway. This pathway is exothermic, but draws on the proton gradient to jumpstart the difficult first few steps. Four billion years ago, it could be that natural proton gradients in deep sea hydrothermal vents drove the reaction of hydrogen gas with CO2 to form organics, and eventually, the first cells. These vents, which work as electrochemical reactors, are not volcanic but are produced by a chemical reaction between ubiquitous minerals such as olivine, and water. The right conditions for the origin of life should be present on any wet, rocky planet with an atmosphere that includes CO2—potentially 40 billion of them in the Milky Way alone. Membrane bioenergetics might be genuinely universal. And if so, life elsewhere might be constrained in the same way too.

Any student of evolution can still see the marks of this constraint on Earth's myriad life forms. Bacteria and archaea remained morphologically simple, despite their metabolic virtuosity, for a staggering 4 billion years. Bill Martin and I have shown that they are limited in their "energy per gene"—prevented from becoming large and complex by a crippling need for local outposts of genes to control membrane bioenergetics. Giant bacteria, such as Epulopiscium, end up hoarding thousands of copies of their complete genome, placed right next to the plasma membrane. This extreme polyploidy carries a huge energetic penalty that prevents any individual genome from expanding beyond regulation prokaryotic size.

So how did eukaryotes escape this energetic stranglehold? Through the rare endosymbiosis that gave rise to mitochondria. The advantage of mitochondria had nothing to do with oxygen, or even compartmentalisation: it was all about genes—loss of them. Mitochondria ultimately lost 99 percent of their genes. Yet they invariably retain a small handful of genes that are necessary to control respiration locally, giving eukaryotes multibacterial power without the overhead. Eukaryotes display a genomic asymmetry that is unknown in prokaryotes: tiny mitochondrial gene sets support a massive nuclear genome. There's no more DNA in total than in giant bacteria, but the huge nuclear genome contains the raw material for experimentation with new gene families, protein folds, and sequence space.

Freedom from energy constraints might not have dictated evolution, but having mitochondria might have. Acquiring endosymbionts set up a radical new problem. They have their own agenda, or at least they did when they were still autonomous cells; and having their own genes means they still do to a point. So acquiring mitochondria not only freed eukaryotes from the energy constraints that kept bacteria relatively simple for billions of years, it also forced their prokaryotic host cells to resolve conflicts, synchronize life cycles, and integrate as an intimate union.

In The Vital Question, I posit that the basal traits of eukaryotes were forged in the crucible of endosymbiosis between prokaryotes, which drove the evolution of sex, the nucleus, the germline-soma distinction, aging, and death. These ideas might be wrong, but they are testable, and could have considerable explanatory power. I think we'll only understand why life is the way it is when we bring energy into the equation.

The Vital Question: Energy, Evolution, and the Origins of Complex Life by Nick Lane. Published in 2015 by W.W. Norton & Company

Nick Lane is an evolutionary biochemist at University College London and has written several popular science books, including Oxygen and Life Ascending, which won the Royal society Prize for Science Books in 2010.