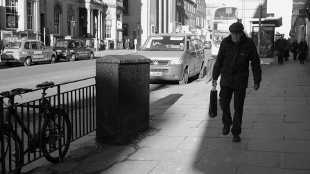 FLICKR, EASYLOCUMOne lasting effect of the great recession of 2008 is the now unemployed baby boomers, who were either forced into early retirement or outright saw their jobs disappear. Left in employment limbo of being “too old to hire but too young to retire,” the 55+ crowd—who, at one time made up about 40 percent of the workforce—was left with the almost impossible task of competing with the 20-something college graduates.

But what of the academic sector? Is the perception that tenure protects the academic elite from the harsh realities of life in private enterprise, based in reality? Indeed, at age 91 Leon Lederman still commands respect as an active scientist, as do Eric Kandel (84), James Watson (85), and E.O. Wilson (84). While most researchers do not have the high-profile credentials of these science luminaries, nevertheless many academics continue to contribute to their fields well into their so-called...

Research positions, even those in private research institutions, tend to be structured similarly to jobs in industry. The comparable pay grade may be lower than the corporate equivalent, but academia still draws talent through liberal benefits, generous vacation times, and attractive retirement plans. The opportunity to develop a following through papers, books, and speaking engagements is an added bonus, and on the face of it, a pretty sweet deal.

Dig a little deeper, however, and a different picture emerges. According to a 2012 report published by the Coalition on the Academic Workforce, colleges and universities are now heavily relying on part-time faculty, more than 75 percent of whom have been teaching part time for more than three years and would consider a full-time tenure-track position if it were offered. Senior academics may have the benefit of tenure, but the demand to be productive is no less than in the corporate sector. Indeed, every research university develops annual productivity plans for its faculty according to the individual member’s role. Those actively teaching are measured against student evaluations. Faculty in research positions are benchmarked against grants, papers published, and the training of graduate students. As in any other professional work environment, failure to meet expectations may result in lower (or possibly no) salary increases.  If it becomes a chronic problem then procedures are implemented for “cause for removal,” even in the case of tenured professors.

Additionally, because a large part of the compensation package to attract talent in the first place is tied to retirement plans, it goes without saying that the recession wreaked havoc on the value of those plans, resulting in postponed retirement for many and diminishing opportunities for early career researchers. Add this to the increase in age before a worker can collect social security dictated by the Social Security Amendment act of 1983—which called for raising the age for collecting full social security benefits from 65 to 67 over a 22-year period beginning in 2000—and it’s no wonder that senior academic professionals are staying put.

While President Barack Obama, Fortune 500 CEOs, and others push for students to earn more STEM degrees, funding cuts at the National Institutes of Health (NIH) and National Science Foundation (NSF), as well as corporate mergers and reduction in R&D staff, are eroding the availability of research jobs. The promise of a pay-off from the investment in science education is slipping away. In the short term, this may look good on a balance sheet, with less government spending and healthier numbers to Wall Street, but over the long term, the United States may be in danger of losing a generation of scientists—a deficit with far greater consequences.

This is not an intractable problem, but it will take resources and much political will to resolve. If senior faculty members are not retiring because of financial challenges, institutions will need to come up with creative ways to bolster pension funds in order to provide incentives to would-be retirees. While there will be costs associated with fueling pension plans, it balances out when a highly paid worker leaves and is replaced with a starting-level salary. Early career researchers are then provided with more opportunities for career advancement, and the institution has its next generation of science professionals at a lower cost.

But money aside, what if senior researchers are simply not interested in considering retirement from a social and professional perspective? Faculty tend to be relatively healthy and enjoy the continual intellectual stimulus of campus life. Forcing senior faculty out is a poor option as it sends a negative message to their junior colleagues about what they have to look forward to. Already weighed down by student loans and other financial burdens, this negative perception that their options later in their career will be limited may push junior researchers to rethink their long-term plans, resulting in a potential loss of talent to the academic world.

Given the focus on STEM education by both business and government, perhaps there is an opportunity to create post-retirement incentives for researchers through mentoring and K–12 classroom-based initiatives funded by a combination of philanthropic grants, corporate support, and academic budget allocations. The US competitive advantage that we have held over other countries for so long would be considerably more bereft if we were to lose such a wealth of institutional knowledge, especially in the science, technology, medicine, and math fields. On the other side of the coin, given the international arms race for talent, we must maintain a healthy flow of incoming young researchers from around the world for the country to stay competitive, but we will only have room for such foreign talent if we can smooth the transition to retirement for experienced senior research professionals.

Brad Fenwick is senior vice president for Global Strategic Alliances at Elsevier. He has previously served as vice president at Virginia Tech, vice chancellor of Research at the University of Tennessee, and chief scientist for the US Department of Agriculture.