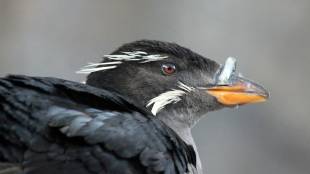 Rhinoceros Auklet (Cerorhinca monocerata) at the Alaska Sea Life Center in Seward, AlaskaWIKIMEDIA, DICK DANIELSThe oceans are the ultimate sink for most human wastes. That includes the persistent end products of our chemical technology. For at least 45 years, we have realized that toxic contaminants, such as DDT and polychlorinated biphenyls (PCBs), have contaminated even the most remote polar marine ecosystems. Sampling the vast expanse of ocean has posed a challenge, but is necessary to understand where and how these toxins are distributed to limit exposure of wildlife and ourselves.

Fortunately, colonial nesting aquatic birds provide efficient and effective means to conduct such sampling. Seabirds are veritable sampling avatars, widely distributed across all the world’s oceans yet returning annually to a geographically confined area; in an afternoon, a seabird biologist can effectively sample from a region that would take weeks using a scientific vessel, which...

Other sea-going animals, such as marine mammals and fish, have also been used as indicators of contamination. But toxin measurements in seabird eggs show lower variance than those in other marine biota, meaning that those values have stronger statistical power and fewer samples are needed for robust analyses (further reducing costs). The reasons that variation is less are primarily: (1) seabirds tend to have much less variation in body size than mammals or fish, so variation in diet is smaller (a large male walrus, for instance, can be up to five times larger than a small female and can sometimes eat seals, whereas small females eat only shellfish); (2) because many seabirds fly, relying on feathers, and not heavier, contaminant-storing lipids; (3) compared to cold-blooded fish, birds and mammals eat more often and therefore their higher toxin levels swing less wildly after each meal.

Ongoing seabird monitoring programs and museum specimens have already documented both the arrival and exponential growth of legacy persistent organic pollutants—PCBs, DDT, anticholinesterase pesticides, and others—during the first seven decades of the 20th century and their eventual decline in response to legislation. Likewise, retrospective analyses of eggs archived in specimen banks have shown increases in newer generation contaminants, such as brominated flame retardants, perfluorinated sulfonates, and carboxylates. Worldwide, thousands of new industrial chemicals are produced and released into the environment each year, and archived seabird tissue banks will no doubt allow us to track the spread of new chemicals over time well into the future.

Although it is relatively easy to collect a seabird egg and analyze its contents for contamination, the harder question is: “Where did these contaminants come from?” In particular, are high levels of contaminants indicative of feeding at a high trophic level, a point source or broad-scale contamination? Recent technology has made answering such questions easier.

Advances in our understanding of biogeochemical cycles mean that we can measure biochemical markers within the same tissue as the contaminant, such as the ratio of stable isotopes or distribution of different fatty acids, to track the origin of the contaminant molecules. For instance, mercury and carbon isotopes showed that high levels of mercury in Alaskan seabirds originated from Yukon River effluent rather than from exposure in the Bering Sea. Likewise, a decline in organic pollutants in arctic seabirds seemed to be associated with a change in diet from arctic to temperate food sources rather than a change in the abundance of pollutants in the environment.

Miniaturized electronic recorders and transmitters promise to refine the basin-scale estimates derived from isotope analysis even further. White-faced ibises with elevated DDT were equipped with satellite transmitters and tracked back to a contaminated site in Mexico; two species of albatrosses nesting on the same atoll had almost order of magnitude differences in contaminant burdens and satellite tracking showed that one species foraged off California and the other off Alaska. In contrast, although ospreys from neighbouring nests in the Pacific Northwest had very different contaminant loads, satellite tracking revealed no connection for contaminant concentrations in eggs with wintering grounds, illustrating the importance of microscale variation. Battery life continues to limit the size and lifespan of recorders, but recent advances include a solar powered GPS device, remote downloading via Bluetooth, the potential ICARUS near-earth satellite system, and others that use cell-phone systems. Such advances should allow researchers to follow birds with meter-scale accuracy, providing much greater detail on where birds derive their contaminant burden.

The Great Pacific Garbage Gyre—a floating raft cast-off plastics and other trash estimated to be almost twice the size of the continental United States—is a stark reminder that many of the unwanted byproducts of humanity end up circulating in the ocean for decades. Likewise, toxic contaminants banned today will be present in our oceans well into the future. Seabirds will continue to tell us that story for decades to come.

Kyle H. Elliott is a Vanier scholar at the University of Manitoba. John E. Elliott is a research scientist at Environment Canada in Delta, British Columbia.