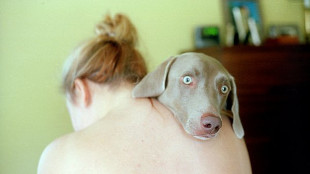 WIKIMEDIA, CHAD MILLERDo you love your dog? Does your dog love you?

How do you know? Who can prove it doesn’t?

The most compelling observations are those made on wild animals, either in the field or in captivity, usually by researchers who have long interacted with the species. A researcher observes an animal behaving in a way similar to the way humans might behave under similar circumstances and posits they must be experiencing the same emotions. If a female chimpanzee cradles her dead offspring and exhibits facial expressions similar to a human mother who recently lost her child, she must be grieving.

A less scientific but more influential...

Beliefs about animal emotions are shaped by anthropomorphism and language.

Anthropomorphism is a logical first-order approach in the absence of any other method of analysis. But the experimental approach, which came into prominence 500 years ago, has now become widespread, due to its superior ability to explain how things work. While this second-order approach has sometimes supported long standing first-order explanations, more frequently, it has modified or overthrown them.

We have generally given up anthropomorphizing about inanimate objects and processes, although residues of the habit occasionally surface, especially when our self-control leaves us. (Who has not cursed a “recalcitrant” inanimate object, such as a door or drawer that has thwarted his will?) Yet we have not been able to give up anthropomorphizing living things, because while the second-order approach is robust when it comes to things that can be observed and measured, such as cognitive abilities, it is at sea when it comes to things that cannot be observed or measured absolutely, such as emotions. We know what motivates us and how we feel when we behave in a certain way, so why not apply this knowledge to similar behaviors in other beings?

Language also colors our thinking about animals. When language is used to describe the activities of nonhuman animals, the listener inescapably applies our languages’ human-centric connotations to the words and their objects. To say, for example, “my dog loves me” connotes that my dog loves me in a human way. But this cannot be, if for no other reason than that a dog has no apparent knowledge of the ephemerality of existence, knowledge that is embedded in every human emotion. And if a dog loves me in a canine way, how that love may be similar to and different from human love is beyond objective resolution.

Our long experience with language means that we now have single words, like love, that we all agree usefully denote particular inner human experiences. Some animals may have emotions as sublime as those expressed in Shakespeare’s sonnets, but without an objective means of communicating them, we can never know.

If inferences about animal emotions are fraught with anthropomorphism and language bias, surely evolutionary principles provide an unbiased way of thinking about animal emotions. But evolution can say only it is plausible that the precursors to human emotions did arise long before humans evolved. Just as certain bones can be identified all the way along the evolutionary tree from primitive fishes to humans so too can certain neuro-anatomical, chemical and physiological substrates associated with emotions in humans be traced well back in our ancestry. But while we can identify these “tangible” substrates in animals, the associated emotions they support, if any, remain a matter of irreconcilable opinion. If stimulation of a part of the brain causes a monkey and a human to react in the same way, we have only one human word to describe the reaction, the word we know only from human experience, say, rage. We have no way of knowing if the monkey is experiencing an emotion similar to the human version and, if it is, how that emotion compares with our own. Further, if an animal should have a unique component to its reactions, we would have no basis for even thinking about it. We can discuss and compare behaviors, but not emotions that may be inferred to underlie them.

Consider the longest and most influential relationship in shaping human attitudes about emotions in animals. Dogs have been domesticated longer than any other species, possibly as long as 35,000 years, ample time for them to have evolved in response to humans’ expectations. Further, the selection has probably been intense, because a noncompliant domestic dog doesn’t fare well. It is quite possible, therefore, that dogs have evolved a capacity to “read” humans’ expectations and have adapted pre-existing behaviours or evolved new ones that fulfill them. A dog doesn’t have to love you; it just has to behave as if it does. In recent times especially, dogs, possibly more than any other animal, are purchased with an expectation of an emotional relationship— and we all want our investments to succeed.

The inescapable truth is that, even if some animals are emotional beings, we will never know how those emotions are experienced. The philosopher, Thomas Nagel, sign-posted this epistemological dead-end concisely in 1974, when he pointed out we can never know what it is like to be a bat. Hanging upside down in the dark in a batman suit just won’t cut it.

The problem of knowing whether animal emotions exist and if so how they are experienced is so intractable it could be regarded as biology’s uncertainty principle.