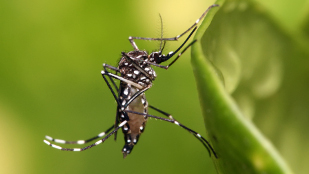 Aedes aegyptiWIKIMEDIA, MUHAMMAD MAHDI KARIMIn 2008 it was proposed to the Geological Society of London that we had entered a new geological era, the Anthropocene. This proposition, based on geological and biological evidence, argued that Earth is now experiencing an extinction event that rivals any in the history of life. Given the understandable concern that we are in the millennia-long process of effecting a cataclysm on our planet, it may come as a surprise that researchers are now developing a technology that could allow for the deliberate eradication of any given species.

Mosquitoes are deadly disease vectors. Dengue fever, West Nile virus, and malaria are just a few of the calamities they help spread. Hundreds of millions of people suffer every year from mosquito-borne illnesses. Often, our best defense is to stop or kill the insects—we erect nets to keep them at bay, fight them with pesticides, and...

George Church and his colleagues at Harvard, my institution, and elsewhere recently published two articles describing how researchers could achieve just that—the modification or eradication of a wild mosquito population. Their approach harnesses the recent explosion in the use of CRISPR genome-editing technology to build gene drives.

Gene drives upend the conventions of natural selection. Normally, an allele spreads in a population in proportion to its fitness; that is to say, the more progeny an organism carrying that allele has, on average, the more widespread it becomes. Gene drives are a way to circumvent this universal tendency.

In 2003, Austin Burt suggested that using “selfish” gene elements, any genetic modification could be imposed on an entire species. Using homing endonucleases, Burt collaborated with Imperial College London’s Andrea Crisanti to demonstrate first that an arbitrary gene—in this case, a fluorescent protein—could be fixed into a population and, second, that the sex ratio of progeny mosquitoes could be skewed to 95 percent male, with an eye toward eradication.

Homing endonucleases—such as those employed by Burt, Crisanti, and colleagues—are notoriously cumbersome. But the CRISPR approach, Church’s team recently noted, is easier to use and could serve the same purpose more effectively. The team argued that use of the protein Cas9 has “democratized” genome editing, making the development of genetically modified (GM) organisms within reach of many laboratories. Indeed, there are already companies that, for a fee, will use CRISPR to produce a custom GM mosquito for you.

One of the ingenuities of this plan is that CRISPR can be used to cut any gene in the genome. In fact, multiplexing allows for the cutting of several genes at once. Once the wild-type gene is cut, homologous recombination (HR) replaces it with whatever altered form of the gene has been inserted into the mutant organism. HR, like CRISPR, is largely agnostic to the sequence that it is replacing and, as such, allows for the insertion of just about any gene.

Based on the pioneering studies from Burt and Crisanti’s team as well as the well-founded enthusiasm for the potential of CRISPR to simplify the process of genome editing, it is not unreasonable to conclude that this approach could work. In their proposal, Church and his colleagues called for “transparent, inclusive, and well-informed discussions” regarding the deployment of this technology.

The team has described a variety of ways the technology could be made safe, how it could be reversed, and how multiple changes could be introduced into wild populations, successively. But concerns that Cas genes in wild populations might be problematic are left largely unexplored; it is assumed that these genes will perform their appointed tasks while conferring a minimal fitness cost to the organism. The notion that organisms evolving with an exogenous DNA cutting enzyme might harness it in new and unexpected ways (as has been seen in bacteriophages) has yet to be acknowledged.

The authors’ description of a “reversal drive” deserves particular notice. In their accompanying Science paper, the researchers suggested that reversal drives be tested in tandem with any proposed gene drives. They show that after a gene drive is completed, a second drive can replace the first, after which a third drive can reproduce the wild-type gene, each by the same mechanism. Should the species survive three successive population-wide manipulations, the assumption is that it will be left where it started, with a wild-type version of the manipulated gene, and a copy of the Cas9 protein along with some guide RNAs targeting the previous cassette. But this is not a true reversal; there is no proposed mechanism to return to a wild-type population lacking a CRISPR locus.

What makes this proposal compelling is that it balances an immediate humanitarian concern against an urge not to interfere with nature.

In past centuries, scientists have addressed destructive invasive species like the grey-backed cane beetle by introducing cane toads to eat them up. Australia is still suffering the consequences—cane toads have found their way across the continent without doing much damage to their target beetle; they have been much more successful in reducing the populations of native reptiles.

With the described gene drive approach, the authors propose performing a 21st century twist on the practice—introducing one gene drive after another to correct unforeseen consequences as they are discovered.

GM organisms in the wild are not new. Fears that lab-grown organisms would destroy ecosystems are largely unfounded. There have even been field tests of gene drives that did not involve the manipulation of the mosquito genome, only infection with a fast-spreading strain of a bacteria that prevents dengue transmission. Yet alternative technologies exist to wipe out local populations of mosquitoes so that they can leave vulnerable human populations free from deadly diseases. What is unique about the CRISPR/Cas9-based gene drives proposal is that wild alleles would be rendered unable to compete, Darwinian selection would be turned on its head and decisions made by researchers could become permanently written into the genomes of entire wild populations.

In an August 29 letter to Science, David Gurwitz of Tel Aviv University responded to the team’s gene drive proposal arguing that such research should be classified to prevent its use in developing weapons. In response, proposal coauthors Kenneth Oye of MIT and Kevin Esvelt at Harvard noted that restricting information would be counter-productive, as it would impede research into containment and reversal. While this is a crucial concern, it makes the untested assumption that gene drives can be put into use without catastrophe. Since gene drives will necessarily alter entire wild populations we must be certain that they will not cause harm from an ecological standpoint.

Only through discussion and consensus can the scientific community provide a framework for how this technology might be applied safely—if at all.

Noam Prywes is a PhD candidate in chemistry at Harvard University.