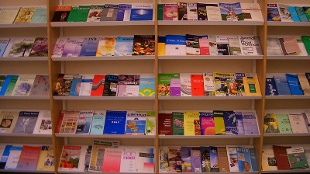 WIKIMEDIA, VMENKOVImagine trying to do scientific research without access to the majority of work previously published in the primary literature. As an undergraduate at the University of the Philippines 5 years ago, this was exactly the situation I faced as I began my thesis project researching neuroactive peptides in sea snails. My school did not have subscriptions to the online academic journal databases that are ubiquitous at universities in the developed world, so I got creative. I reached out to the authors of papers relevant to my research, asking for copies of their articles and more information about their research. Often, I was successful. Other times, however, the researchers simply sent me paywalled links I could not access, or did not respond at all, perhaps because they never received my queries. Many academic servers automatically filter emails which do not come from addresses that end with .edu, and many...

Now a graduate student at the SUNY Upstate Medical University in the United States, I consider myself fortunate to have free access to most of the journals I need. But the recent suicide of internet activist and RSS inventor Aaron Swartz has brought these old memories back. Swartz fought for open-access to the same peer-reviewed journal articles that I struggled to obtain in college. After his death, researchers around the world commemorated Swartz through a Twitter tribute sharing their articles freely through social media under the hash tag #PDFTribute. And now, other open-access advocates must take up the fight.

These actions would not only benefit students and researchers in developing countries and around the world, but would also increase the visibility, audience, and impact of the research—an obvious benefit to the scientists who conducted it. Furthermore, they will never again have to find and forward a particular requested article—a time-consuming obligation for popular articles—and the article will be indexed by Google and other search engines, where it will be discovered by more potential readers.

Many researchers are already on the right track, with more than 2,000 open-access repositories now in place at institutions around the world, according to OpenDOAR, a directory of open-access repositories. And that number has increased dramatically over the past few years. My hope is that these repositories become a standard fixture in academic institutions around the world, empowering more and more people to explore scientific solutions to all sorts of problems that plague society.

Beyond the benefits listed above to both the researchers depositing their work and those gaining access to it, open-access repositories ensure the long-term preservation of the scientific literature. For example, what if the corresponding author passes away? To this problem, Swartz, forward-looking as ever, provides us with an answer. Upon his death, he instructed that all the contents of his hard drives be made publicly available. Let’s follow his example and leave our intellectual legacy for the world to see.

Cherry Mae Ignacio is a PhD candidate in the Biochemistry and Molecular Biology program at SUNY Upstate Medical University, where she studies how the brain is damaged by alcoholism.