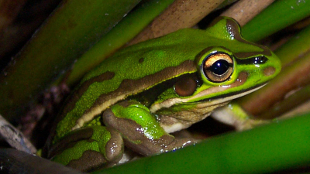 WIKIMEDIA, TNARG 12345In the last 2 decades, field biologists discovered nearly 3,000 new species of amphibians. At the end of July 2012, the total number of amphibian species hit 7,000 with the addition of a high elevation glassfrog (Centrolene sabini) from Manu National Park in Amazonian Peru. At the same time, however, the International Union for the Conservation of Nature and Natural Resources (IUCN) has identified amphibians as the major taxon at the greatest risk of extinction, with 41 percent of amphibian species at risk as of June 2012, and anywhere from 125 to 500 species already extinct.

The suspicion that amphibians were declining in numbers, and that some species were beginning to disappear, first surfaced at the inaugural World Congress of Herpetology in Canterbury, United Kingdom, in the fall of 1989.  The following spring, I helped organize a workshop, sponsored by the National Academy of Sciences...

Among the leading factors are habitat destruction and modification as a result of human population growth, agricultural development, deforestation, and urbanization.  Climate change was also an early suspect, based on analyses of data from the famous Monteverde Cloud Forest Reserve in Costa Rica, where more than half of local amphibians species disappeared rather suddenly in the late 1980s.  Pesticides, pollution, and introduced and invasive species were proposed as additional factors.  Then, in 1998, a new infectious disease—the dreaded chytrid fungus Batrachochytrium dendrobatidis (Bd)—was found to be having deadly effects on amphibians in Costa Rica, Panama, and tropical Australia.  Whatever the cause of a local extinction, there can be little doubt that many factors might be involved.

A widespread misconception about amphibians is that they are weak and vulnerable organisms, particularly susceptible to climate change, for example.  In fact, the living amphibians have existed in modern form on the order of 200 million years, surviving mass extinctions and environmental changes far more dramatic than we have experienced in recent years.  And they most likely did so in place, not undertaking mass migrations, as did many birds, mammals, and even much vegetation as the local climate changed. Instead, they likely persisted in local refuges by being nocturnal and having long periods of inactivity beneath ground. Indeed, recent evidence from the still relatively young field of phylogeography—the study of historical processes, using modern genetic analyses, that are responsible for the current distribution of organisms—has suggested that climate change may be less devastating for amphibians than for some other groups of organisms.

Nevertheless, amphibian numbers continue to decline. Many human-implicated changes and new factors such as Bd may well display synergistic effects that will have unpredictable impacts. To address this extinction crisis, colleagues and I launched the website AmphibiaWeb (http://amphibiaweb.org/) to track amphibian discoveries and declines. On AmphibiaWeb, every species has its own homepage, and new species are posted as they are formally named.  In 2012, 197 new species were added—a rate of nearly 4 per week!  AmphibiaWeb also regularly updates its information to incorporate new information on casualties of the global decline, because accurate, up-to-date information is critical to long-term efforts to ensure the conservation of amphibians.

Confronting the complicated issues of amphibian extinctions is a daunting task for conservation biologists, but solutions exist. Habitat protection, captive breeding programs, and attempts to mitigate effects of infectious disease could all have positive effects of amphibian populations. A recent success is the reintroduction of the Kihansi Spray Toad, once extinct in nature, back into its habitat in Tanzania. Other reintroduction efforts are currently in progress. The more knowledge we accumulate about the status of amphibian species around the world, the better we can focus our efforts to save them.

David B. Wake is Professor of the Graduate School in Integrative Biology at the University of California at Berkeley, a curator at the Museum of Vertebrate Zoology at Berkeley, and the director of the AmphibiaWeb Project.