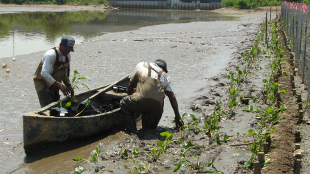 Restoring a freshwater tidal marsh on the Anacostia River, Washington, DC© Ecological Restoration and Management, Inc.Today, approximately 70 percent of the world’s ecosystems have been altered to some degree, and the whole Earth may be approaching a tipping point toward an uncertain regime as a consequence of the accelerated global loss of biodiversity and ecosystem functionality. Ecosystem restoration and creation is necessary now more than ever before to slow and, where possible, reverse that loss. But devising successful restoration strategies can be tricky.

Following ecosystem restoration, it may take many decades or centuries for damaged ecosystems to recover the structure and functionality they had prior to degradation. For example, in five depressional wetlands in the state of New York, only 50 percent of their organic matter was recovered 50 years after they were restored. Similarly, artificial ecosystems take just as long to resemble the selected reference systems its...

Some restorations and creations fail altogether, such as wetlands that end up dominated by invasive reeds or prairies where focal threatened species do not reestablish. In cases of success, some components, like highly mobile vertebrates, recover or re-assemble faster than others, like plants, which can affect the speed and trajectory of ecosystem recovery or development. Other factors, including the type and duration of the original cause of degradation, can further complicate the project, and ecological constraints, such as climate, hydrology, and organismal and plant-soil interactions, can also steer the trajectory of ecosystem development. The problem today is that we lack consistent understanding about how these factors affect ecosystem recovery.

Recent meta-analyses show that ecosystems do recover when degradation stops, but recovery is far from perfect, with only 70 to 80 percent of the biodiversity and ecosystem functions recovered even after decades of ecosystem restoration or development. These systems may simply need more time, as it can take up to centuries for some processes, such as the accumulation of soil carbon, to reach more stable levels. But it’s also possible that the ecosystems failed to fully recover as a result of an incomplete understanding of the actual requirements for effective community reassembly and ecosystem functionality. For example, little recovery has been achieved in Fiordland National Forest in New Zealand after 40 years of culling extremely high-dense deer populations that originated when the species was introduced to the area in the 1930s. Apparently, a combination of previously unknown ecological factors, including slow tree growth rates, deer diet changes, and altered ecological succession, limited the recovery of those heavily over-grazed forests.

Additionally, we need to consider that, under certain conditions, alternative ecosystem configurations to those prevailing prior to degradation (including occasional new species) may be better positioned to succeed. For example, the spread of invasive cattails in the Everglades that disturbs patches of the existing wetland vegetation is a consequence of increased agricultural phosphorus in the system. This may become increasingly important in response to the new and emerging environmental conditions, such as the spread of invasive species or climate change.

Finally, the ability to successfully restore and create ecosystems should not be used to justify further degradation of well-preserved ecosystems. Instead, we need to invest much more in developing the technical know-how of repairing the damaged ecosystems that already exist all over our world and adapt our interventions to the current changing conditions.