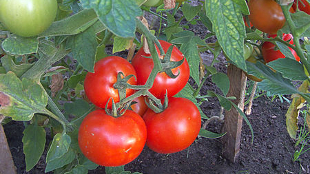 WIKIMEDIA, RASBAKTomatoes are the #1-selling fruit or vegetable in the world today. Yet consumers complain about blandness of supermarket tomatoes and yearn for the old timey summer-fresh, off-the-vine taste. In a recent symposium at the 2013 annual meeting of the American Association for Advancement of Science, Harry Klee, a horticultural scientist at the University of Florida, reminded us that it is only in the last 50 years or so that “we’ve done damage to tomato,” referring to the creation of the industrial variety—a prolific yielder with inferior flavor. He also noted that with the recent publication of the tomato genome sequence and subsequent identification of key flavors and aroma genes, it may now be within our power to create a good-tasting and high-yielding fruit.

How the tomato broke

The goals of commercial tomato breeders have changed over time. In the late 1800s, the best seed men sought large, round,...

As a result, the market for a really good tasting, cheap commercial tomato available year-round remains unfulfilled. But if tomato genetics are so malleable—as evidenced by the rapid disappearance of flavor in the face of breeding for crop yield and shelf-life—why is the supermarket tomato still so disappointing?

Tomato taste is a unique combination of five tastants—sweet, sour, salty, bitter, and savory (umami) compounds—as well as the aroma of volatiles, many from the breakdown of the carotenoid pigments, such as the bright red antioxidant lycopene. The modern tomato plant was bred to produce more fruit, diluting the relatively fixed amount of nutrients and tastants the plant has to offer. But that is only part the story.

Researchers at the University of California, Davis, recently discovered that a genetic mutation that occurred about 70 years ago, and was then selected by breeders for its effect of causing tomatoes to ripen uniformly, came at the cost of less sugar and carotenoids in the fruit (Science, 336:1711-15, 2012). Breeders also grew gas-able fruit, cultivars that respond well to ethylene to trigger ripening during post-harvest, thus allowing tomatoes to be picked while still green. However, it is difficult to gage when green tomatoes have matured to the point of forming the seed gel so rich in acid and umami. If picked too soon, the fruit will not ripen well.

Even for the mature green tomatoes, postharvest ethylene gassing by itself cannot fully substitute for the flavor developed by true vine ripening. For example, green fruit receives most of its sugar from leaves, but also has chloroplasts that, when bathed in sunshine, can make more sugar directly within the fruit. Picked and stored fruit, of course, is stored in the dark, and thus neither receives nor produces sugar. And because tomatoes are a delicate fruit, they are also bred for a tougher (and distasteful) skin to withstand picking, packing, and transport. The final nail in the flavor coffin is refrigeration. Despite knowing it ruins the taste by reducing the volatiles so crucial for good flavor, wholesalers and retailers refrigerate tomatoes to prolong shelf-life during distribution.

How to fix the tomato

To achieve a better-tasting tomato, Harry Klee and his colleagues turned the breeding process on its head. First, they analyzed more than 152 heirlooms plus some supermarket varieties, examining sugars, acids, and 28 volatiles (Current Biology, 22:1035-39, 2012), and found a surprising result: despite having endured several genetic bottlenecks as it hopped from South America to Mesoamerica to Europe, the tomato still has as much as a 3,000-fold variation in volatile content across the cultivars. A 100-person consumer panel then tasted 66 tomato cultivars, rating them for intensity of flavor, sweetness, sourness, and overall likeability. As expected, sweetness was most effective in swaying the panelists. However, there was a startling poor correlation between the amount of sugar and people’s perception of sweetness. For example, the Yellow Jelly Bean variety has more sugar than the Matina tomato, but people perceived Matina as twice as sweet. This discrepancy may be explained by the accompanying volatiles: Matina has a high concentration of volatiles that enhance our perception of sweetness and low concentration of sweetness suppressors; Yellow Jelly Bean has the opposite.

We detect the volatiles sniffed through our nose and also from food as we chew, as volatiles enter the nasal cavity from the back of the mouth. It is the latter that is so essential to detecting flavor. Whereas olfactory signals go to the prefrontal cortex, the volatile signals from the back of the mouth interact with taste signals in various parts of the brain. Based on extensive screening of heirlooms, both molecularly and with flavor-preference panels, Klee claimed that he and his colleagues now “have the recipe—we know what the content of the ideal tomato is.”

However, while they have crossed the best tasting heirlooms with modern varieties to create hybrids that taste as good as the heirlooms and are disease resistant and produce more fruit than the heirlooms, the hybrids aren’t the bonanza producers that commercial varieties are. And until a plant can produce as much fruit as those that supply the supermarkets, growers are unlikely to switch cultivars. As long as people don’t want to pay more, the growers will favor the heavy-producing, inferior-tasting industrial varieties.

Nancy Stamp is a professor at Binghamton University–State University of New York. Using the tomato plant as a research system, her research focuses on why some plants are so well-defended against insects while others are susceptible to herbivory.