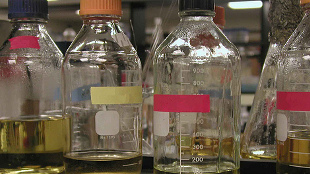 FLICKR, ADONOFRIOOpen-source software paved the way for a new, community-driven development model by providing a product that was free to use and modify. This in turn fostered a business culture that was driven by support-services. That open-source principles could also herald a new era in biology was demonstrated by the successful completion of the publicly funded Human Genome Project more than a decade ago. Today, that same open, community-driven mindset continues to drive much research in the life sciences.

Soon after the human genome sequence was published, biohackers and do-it-yourself biology (DIYbio) groups came onto the scene. Among the first to demonstrate the feasibility of garage biology was Meredith Patterson, who created glow-in-the-dark yogurt by transfecting green fluorescent protein DNA into Lactobacillus. Rob Carlson, who in 2005 was among the first to spot this new development and start his own garage lab, opined in The Scientist in 2011...

DIYbio groups—such as BioCurious, CounterCulture Labs, Genspace, Bioartlab, and Biogarage—have sprung up in many cities across North America, Europe, Asia, and Oceania. While many have demonstrated that simple experiments like isolating DNA or creating recombinant microbes are easily replicated outside the traditional lab, more promising, low-cost, open-source tools are also being developed. These include Biocurious’s bioprinter, OpenFuge, and the Kickstarter-backed OpenPCR. Of these, the latter two are already available, and at a fraction of the cost of the cheapest commercial models.

To grow, the DIYbio community must have access to inexpensive lab equipment and consumables. A number of companies, which include Open Biotechnology, IORodeo, and Chai Biotechnologies, are offering open-source products ranging from mammalian cell lines, electrophoresis kits, and power packs to thermal cyclers for PCR. While this list is by no means exhaustive, partnering with these and other similar startups could satisfy DIYbio’s thirst for machines and reagents, and help create innovative technologies.

And then there are the open-source hardware companies, such as SparkFun, Adafruit Industries, and MakerBot, as well as initiatives like RepRap, which are well positioned to serve the DIYbio community. SparkFun and Adafruit manufacture hardware components for DIY projects, such as Arduino microcontroller boards, printed circuit boards, and other accessories. MakerBot produces the Replicator 2 series of 3-D printers and RepRap is a community-based initiative for building self-replicating 3-D printers. Writing in Science, Michigan Technological University’s Joshua Pearce noted that Arduino-controlled research equipment fabricated on 3-D printers could soon become a reality. Members of Joseph DeRisi’s lab at the University of California, San Francisco, have already taken the first steps by 3-D printing lab consumables and equipment such gel electrophoresis combs, gel trays, and rotors for bench-top centrifuges.

While the ability of DIYbio to drive technological innovation is fairly obvious, its ability to spur basic research innovation is less clear. For this to happen, equipment and operating costs must be brought down. Technological innovation may well fuel research advances in the long run, but for now, DIYbio groups could focus on community outreach programs and targeting high school and university participation. Community labs that are up and running could invite students to volunteer. They could expand community outreach online by posting videos or providing links to educational sites. Networking among DIYbio groups to develop shared goals and invest in shared equipment could be one way out of the resource crunch. Another would be to borrow from the business incubator model by asking for a small percentage of equity in exchange for assistance in developing a successful product and bringing it to market.

Countercultural movements are evidence of a society’s diversity and vitality. Many of the biggest advances in science have come from people outside or on the fringes of the science establishment. The emerging DIYbio community could become the incubator that nurtures the next generation’s technologies and public scientists. For this to happen, DIY biologists will need to band together to gain the critical mass necessary to support the open-source development of biological techniques, equipment, and experimental methods.

Usha Nair is a research associate in the department of biology at the University of Saskatchewan, where her research focuses on the structure determination of proteins associated with bacterial virulence.