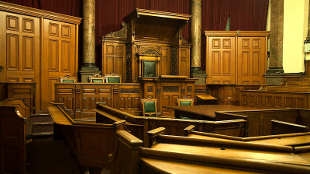 An original Victorian Courtrooms at the Galleries of Justice Museumin Nottingham, EnglandWikimedia, FayerollinsonScientific evidence concerning the biological causes of bad behavior is becoming increasingly common in the courtroom. Forensic psychiatrists at Vanderbilt University have genetically screened defendants charged with first-degree murder for a gene associated with antisocial personality disorder, for example. And when it came time to sentence convicted murderer Brian Dugan, neuroscientists performed neuroimaging on Dugan's brain in order to claim he has a defective, psychopathic brain.

What would you do if you were faced with such a decision? Imagine you're a juror tasked with the job of recommending a sentence for a criminal found guilty of aggravated battery. The criminal, Jonathan Donahue, went into a Burger King restaurant with the hope of robbing it, then beat the manager so severely that he sustained brain damage. After he was arrested, Donahue seemed to revel in his crime,...

At the sentencing hearing, a psychiatrist provides expert testimony saying that Donahue is a diagnosed psychopath. She explains that psychopathy is a clinical diagnosis defined by impulsivity, lack of empathy, and lack of remorse. The judge tells you that the standard sentence for cases of aggravated battery is about 9 years.

First Question: With this information, how many years in prison will you recommend for Donahue?

Second Question: In light of this additional neurobiological evidence, how many years in prison will you recommend for Donahue?

This is the double-edged sword of the science of criminal behavior. The exact same evidence could either increase or decrease punishment, depending on how that evidence is interpreted.

With scientific evidence about the causes of criminal behavior becoming more and more common in the court room, the legal system faces a pressing question: Which way will the double-edged sword cut? In Dugan’s murder case, a jury ultimately sentenced Dugan to death, but according to his attorney the scientific evidence switched a slam dunk case against Dugan into a much more complicated decision for the jurors. To investigate this question in a systematic way, my colleagues and I performed a national experiment involving US state trial court judges. We presented the judges with Donahue's case and asked them to sentence him. The results of this experiment were published last month in Science. The judges told us that on average they sentenced convicts guilty of aggravated battery to about 9 years in prison. The judges who received only expert testimony concerning Donahue's diagnosis of psychopathy sentenced him on average to almost 14 years in prison. But the judges who received the expert testimony concerning Donahue's diagnosis of psychopathy as well as the evidence concerning the neurobiological causes of his psychopathy sentenced him on average to about 13 years in prison. Compared to just the diagnosis of psychopathy, that is, the neurobiological evidence reduced Donahue's sentence by roughly a year (a statistically significant difference).

The presence of scientific evidence about the causes of criminal behavior is only likely to increase in the courtroom. As a result, scientists and non-scientists alike need to discuss this issue and decide how biological knowledge should influence the legal system.

To get the conversation going, in the Comments section below, list your answers to the First and Second Questions and explain your justification for the increase, decrease, or lack of any change in the prison sentence that you recommended for Donahue.

James Tabery is a professor of philosophy at the University of Utah.