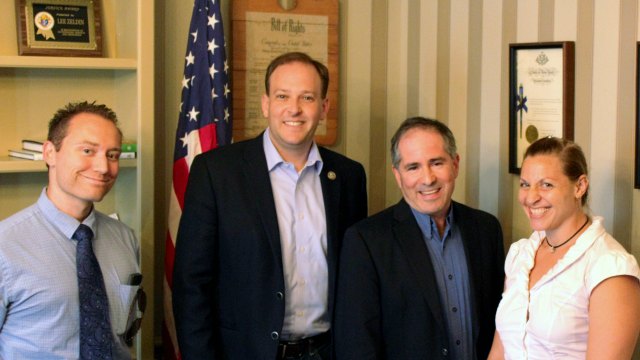 Science is in jeopardy in America. You don’t have to look much further than the words and actions of our current Commander-in-Chief, Donald Trump. Mr. Trump’s priorities were bared with his proposed 2018 budget, which slashes funding to multiple scientific and health institutions, including the National Institutes of Health (NIH), the Environmental Protection Agency (EPA), the Centers for Disease Control and Prevention (CDC), the Food and Drug Administration (FDA), the National Science Foundation (NSF), the National Aeronautics and Space Administration (NASA), the United States Geological Survey, and the National Oceanic and Atmospheric Administration (NOAA)—to name a few.

Cuts to NOAA would drastically impair the agency’s climate research. NASA cuts would end a research program necessary for...

There are tremendous implications for long-term growth and economic development were these cuts to be enacted. To be fair, this budget is only a proposed plan, and will likely (hopefully) not pass through Congress in its current form, but I believe that even fear of these cuts could lead to attrition of researchers, as it did during the sequestration in 2013. It also highlights the administration’s priorities, especially as the White House seeks to cut overall federal research funding by nearly 17 percent.

We expressed our concern over the lack of scientists in the administration, and how it is critical for policy to be made based on the best available evidence.

The urgency of the situation is further highlighted by the fact that many of the top science and technology positions throughout the federal government still remain vacant and as of May there were almost 700 vacancies in the CDC with a hiring freeze in place. Trump recently nominated Sam Clovis, an economics professor and a former talk show radio host, to lead the Department of Agriculture’s science, which is unsettling as Clovis has no formal scientific background.

The fact that this administration is not prioritizing scientific funding has led to angst within the scientific community, as evidenced by the recent mobilization of scientists in politics. 314 Action is a recently formed nonprofit organization whose goal is to advocate for evidence-based policy solutions by electing more STEM candidates to office. But research funding is not the only thing concerning scientists. Science, and the scientific method itself, is under attack.

Newly appointed EPA administrator Scott Pruitt denies the scientific consensus on global climate change, and has begun to dismantle Obama-era regulations, including the Clean Water Rule (also known as the Waters of the U.S., or WOTUS), the Climate Action Plan, and the Clean Power Plan rule, which limits power plants’ greenhouse gases. Guidance on how to include climate data during environmental reviews from the Council on Environmental Quality (CEQ), a division of the Executive office created by Congress 25 years ago under President Nixon to advise the president on environmental policy, has been rescinded. Just this week, the Trump administration disbanded a 15-person Climate Advisory Committee, made up of academics, local officials, and corporate representatives, whose goal is to help policymakers incorporate climate data into future decision making.

President Trump frequently promises to restore jobs to coal miners despite the evidence showing that the large reductions in this industry are mostly due to the lower cost and environmental benefit of natural gas. The global economy will increasingly demand cheap electricity produced with minimal toxic or planet-warming pollution, and China is currently leading the world in renewable energy investments.

The recent announcement of the US withdrawal from the International Paris Climate Accord (known as COP21, the 21st Conference of the Parties to the UN Framework Convention on Climate Change), an agreement signed by 195 nations to mitigate the effects of global climate change, sent shivers through the scientific community. Since then, French President Emmanuel Macron has invited climate scientists to do their work in France, and other countries have also opened up new research opportunities.

It was for all of these reasons, and more, that I started my organization, Science Advocacy of Long Island (SALI), this past January. The very first protest I ever attended was the March for Science in New York City in April. I have spent most of the last decade studying a particular protein in detail and its effect on the progression of breast cancer as well as the interaction of cancer cells with our immune system. Cancer research is something close to my heart, but it is the output of all basic research that provides the groundwork for innovation and technology for years to come.

I began with outreach in my local community. Most people don’t interact routinely with scientists nor do they know where or how to find accurate information. And as a scientist, I didn’t even know what the general concerns among the public would be, because I am mostly surrounded by other scientists. Therefore, I set up a forum called “Ask the Scientists” at a local community center to begin to build bridges between scientists and the general public, and to help scientists learn how to communicate difficult, and sometimes controversial, scientific concepts in a productive manner. I have since put together lists and links to valuable (and vetted) resources that are easily accessible on our website.

He was cordial, and he listened, which is a start.

Next, I reached out to local politicians to advocate for science-based policies. Last week, I met with Congressman Lee Zeldin (R-NY), along with scientists from Stony Brook University and Brookhaven National Laboratory.

We communicated the importance of funding research from many different angles. We explained how CRISPR, now being hailed as a potential Nobel-prize winning gene-editing technology with the possibility of curing genetic defects and eradicating diseases, was discovered by studying the basic biology of bacteria.

We talked about the financial and economic advantages of being on the cutting edge of research, especially in a district where Stony Brook University is the largest single-site employer on Long Island and a driving force of the regional economy. The institution has an annual economic benefit of $4.65 billion, generating nearly 60,000 jobs and accounting for nearly 4 percent of all economic activity in Nassau and Suffolk counties, and roughly 7.5 percent of total jobs in Suffolk County.

We expressed our concern over the lack of scientists in the administration, and how it is critical for policy to be made based on the best available evidence. We asked to include Zeldin in ongoing discussions between scientists and policy-makers. He was cordial, and he listened, which is a start. The future remains to be seen, but no matter the hurdles, I will continue to advocate on behalf of science and scientific policies however I can.