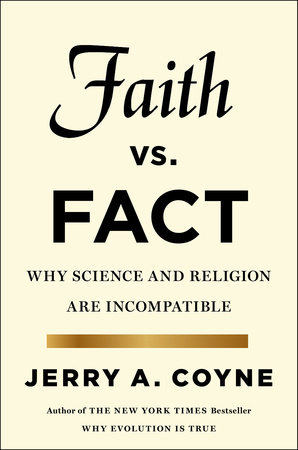 The battle between science and religion is regularly declared over, with both sides having reached an amicable truce. “Accommodationists” on both the religious and scientific sides assure us that there is no conflict between these areas, that they deal with separate spheres of inquiry (science deals with the natural world, religion with meaning, morals and values), or even that they can somehow help each other via an unspecified “dialogue.” After all, we’re told, there are many religious scientists (two notables in my field are Francis Collins, director of the National Institutes of Health and evangelical Christian, and Kenneth Miller, an observant Catholic who is also biologist at Brown University), so how can there be possibly be a conflict?

But despite these claims, the dust hasn’t settled. Why the continuing publication of accommodationist books if the issue was resolved long ago? Why do 55 percent of Americans...

In fact, the conflict between science and religion—at least the Abrahamic faiths dominant in the U.S.—is deep, endemic, and unlikely to be resolved. For this conflict is one between faith and fact—a battle in the long-fought war between rationality and superstition.

Why is there such concern about conflict between religion and science, as opposed to between, say, sports and science, or business and science? It’s because science and religion are both in the business of determining what is true in the universe—although religion has other concerns as well. Science’s ambit is well known, but it’s also important to realize that religion also depends heavily on claims about what is true: claims about the existence and nature of gods, how one’s god wants you to behave, the occurrence of miracles, and whether there are eternal souls, untrammeled free will, and afterlives.

This fact-dependence of faith is recognized by most theologians. As renowned religious scholar Ian Barbour noted, “A religious tradition is indeed a way of life and not a set of abstract ideas. But a way of life presupposes beliefs about the nature of reality and cannot be sustained if those beliefs are no longer credible.” Nearly every faith has some non-negotiable beliefs about reality. The foundational claim of Christianity, for instance, is that Jesus was a divine savior whose acceptance gains us eternal life. Factual belief is pervasive: According to a 2013 Harris poll, 64 percent of all Americans believe in the survival of the soul after death, 57 percent that Jesus was born of a virgin, and 58 percent in the existence of Satan and hell.

But while science and religion both claim to discern what’s true, only science has a system for weeding out what’s false. In the end, that is the irreconcilable conflict between them. Science is not just a profession or a body of facts, but, more important, a set of cognitive and practical tools designed to understand brute reality while overcoming the human desire to believe what we like or what we find emotionally satisfying. The tools are many, including observation of nature, peer review and replication of results, and above all, the hegemony of doubt and criticality. The best characterization of science I know came from physicist Richard Feynman: “The first principle is that you must not fool yourself—and you are the easiest person to fool. So you have to be very careful about that.”

In contrast, religion has no way to adjudicate its truth claims, for those claims rest on ancient scripture, revelation, dogma, and above all, faith: belief without sufficient evidence. Is there one God, or many? Does he want us to work on the Sabbath? Is there an afterlife? Was Jesus the son of God? The problem, of course, is that faith is no way to decide what’s true. It is, à la Feynman, an institutionalized way of fooling yourself. Religion acts like science in making claims about reality, but then morphs into pseudoscience in the way it rejects disconfirming evidence and insulates its claims against testing. The toolkit of science is—and will remain—the only way to discover what’s real, whether in biology, physics, history, or archaeology. Religion can offer communality and can buttress morality, but has no purchase on truth.

But even if science and religion are incompatible, what’s the harm? Most of the damage comes from something inherent in many faiths: proselytizing. If you have a faith-based code of conduct attached to beliefs in absolute truths and eternal rewards and punishments, you’re tempted to impose those truths on others. The most obvious subjects are children, who are usually indoctrinated with their parents’ brand of faith. That can produce not just psychological but physical harm: 43 of 50 U.S. states, for instance, have laws exempting parents from prosecution if they harm their sick children by rejecting science-based medicine in favor of faith healing. Forty-eight of our 50 states allow religious exemptions from vaccination. The results are predictable: children needlessly become sick, and some die. And we’re all complicit in those laws, which are based on unquestioning respect for faith.

There is also “horizontal” proselytizing: pressing faith-based beliefs on others via politics. This has led to religion-based opposition to things like global warming, condom use for preventing AIDS, and abortion. It’s unlikely that any of this would exist if people were to privilege reason over faith.

In the end, in both science and everyday life, it’s always good policy to hold your beliefs with a tenacity proportional to the evidence supporting them. That is the foundation of science and the opposite of religion. As the philosopher Walter Kauffman noted, “Belief without evidence is not a virtue, but opens the floodgates to every form of superstition, prejudice, and madness.”

Jerry A. Coyne is a professor of ecology and evolution at the University of Chicago. His 2009 bestseller, Why Evolution is True, was one of Newsweek’s “50 Books for Our Time.” Faith vs. Fact: Why Science and Religion are Incompatible goes on sale today.