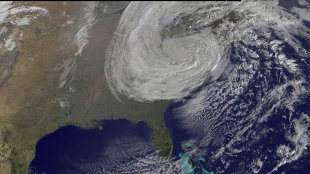 Satellite image of Hurrican SandyNOAA-NASA GOES ProjectSandy started as an ordinary hurricane, feeding on the warm surface waters of the Atlantic Ocean for fuel.  The warm moist air spirals into the storm, and as moisture rains out, it provides the heat needed to drive the storm clouds.  By the time Sandy made landfall on Monday evening, it had become an extratropical cyclone with some tropical storm characteristics: a lot of active thunderstorms but no eye.  This transformation came about as a winter storm that had dumped snow in Colorado late last week merged with Sandy to form a hybrid storm that was also able to feed on the mid-latitude temperature contrasts.  The resulting storm—double the size of a normal hurricane—spread hurricane force winds over a huge area of the United States as it made landfall.   Meanwhile an extensive easterly wind fetch had already resulted in piled up sea...

In many ways, Sandy resulted from the chance alignment of several factors associated with the weather. A human influence was also present, however.  Storms typically reach out and grab available moisture from a region 3 to 5 times the rainfall radius of the storm itself, allowing it to make such prodigious amounts of rain. The sea surface temperatures just before the storm were some 5°F above the 30-year average, or “normal,” for this time of year over a 500 mile swath off the coastline from the Carolinas to Canada, and 1°F of this is very likely a direct result of global warming.  With every degree F rise in temperatures, the atmosphere can hold 4 percent more moisture. Thus, Sandy was able to pull in more moisture, fueling a stronger storm and magnifying the amount of rainfall by as much as 5 to 10 percent compared with conditions more than 40 years ago.  Heavy rainfall and widespread flooding are a consequence.  Climate change has also led to the continual rise in sea levels—currently at a rate of just over a foot per century—as a result of melting land ice (especially glaciers and Greenland) and the expanding warming ocean, providing a higher base level from which the storm surge operates.

These physical factors associated with human influences on climate likely contribute to more intense and possibly slightly bigger storms with heavier rainfalls.  But this is very hard to prove because of the naturally large variability among storms.  This variability also makes it impossible to prove there is no human influence.  Instead, it is important to recognize that we have a “new normal,” whereby the environment in which all storms form is simply different than it was just a few decades ago.  Global climate change has contributed to the higher sea surface and sub-surface ocean temperatures, a warmer and moister atmosphere above the ocean, higher water levels around the globe, and perhaps more precipitation in storms.

The super storm Sandy follows on the heels of Isaac earlier this year and Irene last year, both of which also produced widespread flooding as further evidence of the increased water vapor in the atmosphere associated with warmer oceans. Active hurricane seasons in the North Atlantic since 1994 have so far peaked with three category 5 hurricanes in the record breaking 2005 season, one of which was Katrina.  As human-induced effects through increases in heat-trapping gases in the atmosphere continue, still warmer oceans and higher sea levels are guaranteed. As Mark Twain said in the late 19th century, “Everybody talks about the weather, but nobody does anything about it.” Now humans are changing the weather, and nobody does anything about it! As we have seen this year, whether from drought, heat waves and wild fires, or super storms, there is a cost to not taking action to slow climate change, and we are experiencing this now.

From New Zealand, Kevin Trenberth is a distinguished senior scientist at the National Center for Atmospheric Research (NCAR). He has been heavily engaged in the World Climate Research Programme (WCRP), where he currently chairs the Global Energy and Water Exchanges (GEWEX) program, as well as the Intergovernmental Panel on Climate Change, for which he shared the Nobel Peace Prize in 2007.