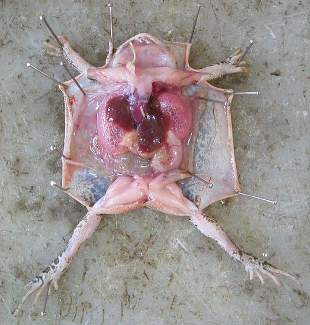 WIKIMEDIA, MUHAMMAD MAHDI KARIMA recent Oregon State University (OSU) study found that 25 percent of teachers surveyed who used live animals in their classrooms later released them into the wild, sometimes introducing non-native species into local environments.  Only a minority of these teachers was aware that the  animals they released could cause problems and harm to native species and ecosystems.  The study also reported that many suppliers do not think that the environmental effects of their animals are their concern.  This situation, including some teachers’ and biological supply companies’ apparent minimal awareness of the environmental consequences of certain animal-use practices, is mirrored in another widespread use of animals in education—dissection.

Amphibians, reptiles, fish, birds, and many invertebrates are among the species that are taken from natural habitats and used in dissection classes, contributing to the depletion of species diversity and imbalance in ecosystems.  Frogs, for instance, provide a natural...

Furthermore, it is not just the harvesting of live animals that is cause for concern.  The preservation and discarding of dead animal specimens in classrooms carries additional environmental risks.  Toxic chemicals such as formaldehyde or formalin preserve millions of animals each year.  Formaldehyde has been identified as a carcinogen in humans by the US Department of Health and Human Services’ National Toxicology Program, and the Environmental Protection Agency has designated it as “a hazardous air pollutant, water pollutant, and waste constituent.”  The scope of the toxic-chemical waste generated by the disposal of dissection specimens makes the practice a problem not just for teachers and students, but for the public and the environment as well.  Unfortunately, the extent of the environmental impact of killing, preserving, and discarding animals for science classes has yet to be assessed in a full impact study.

While the environmental harm caused by the procurement of fish and other species for consumption and/or show is also a significant concern, millions of animals are caught each year from the wild or raised by biological supply companies for educational purposes and discarded as hazardous waste.  The Johns Hopkins University Center for Alternatives to Animal Testing has estimated that 6 million vertebrate animals are dissected in US high schools each year.  Use in the United States for all educational purposes was estimated at nearly 10 million vertebrates and 10 million invertebrates.

This unnecessary use is especially concerning considering that there are more effective, technologically advanced, and environmentally-friendly options available.  According to Marge Peppercorn, a Harvard-trained physician and medical advisor to the New England Anti-Vivisection Society, “Comparative studies have shown time and again that alternatives to dissection—from computer programs to models that are more realistic than formalin-fixed ‘specimens’—are as educationally effective, and in most cases more so, than animal dissection.  If medical and veterinary schools are rapidly replacing animals with alternatives, why shouldn’t this also be happening at the high school level?”

The use of animals in schools makes an impression on young minds, contributing to adopted attitudes and ethics surrounding such use.  Using alternatives can make an enormous contribution to the environmental awareness of students and increase critical thinking regarding the effects of human use of animals on the environment, as well as the important contemporary ethical challenges that face human-animal relationships across fields.

Luckily, the vast majority of teachers want to be a part of the solution, and there are scientifically viable solutions to questionable animal use in science education that allow teachers to guide their students’ lessons in comparative anatomy and other courses in a more environmentally conscious and animal friendly way.  The environmental effects of using animals in education emphasize the need for greater consideration and adoption of alternatives.

Katherine Groff holds a Master of Science in Fisheries and Wildlife from Michigan State University and is a Programs and Research Associate at the New England Anti-Vivisection Society (NEAVS).

For an argument on keeping hands-on activities like dissection in the classroom, see this opposing opinion piece.