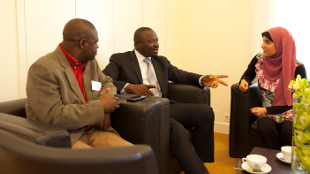 FLICKR, CTBTO PHOTOSTREAMA 2011–2012 report on the demographics of the scientific workforce of the National Institutes of Health (NIH) revealed a very dismal state of diversity at our nation’s premier biomedical and behavioral sciences research agency: only 1.2 percent of tenure track faculty and 1.1 percent of senior investigators were African American, and the proportion of Hispanics was not much better, hovering around 3 percent. These numbers suggest little progress from what was recently described in Science by economist Donna Ginther of the University of Kansas and colleagues as “a long history of working to increase the diversity of its intramural and extramural biomedical workforce.” Given the agency’s efforts—and financial support—to diversify the biomedical workforce at leading research universities and institutions, this is a dismal failure.

The NIH of course has lots of diversity: almost every janitor, dish washer, mail man, and parking lot attendant is a minority!...

Later, my service as a permanent member on the NHGRI Genome Study section was due to my genomics research and education activities as an independent investigator at TU, and my experience as a genomics grant reviewer may have contributed to my lab’s success in competing for several research and training grants at Virginia Tech since 2000, as has been suggested elsewhere. In turn, the minority-focused training grants awarded to us have resulted in at least 10 minority PhDs who are currently postdoctoral trainees at institutions like Georgetown University, the University of Pennsylvania, and the University of North Carolina at Chapel Hill. However, the success of a few scientists in adding diversity to the biomedical workforce is clearly not enough make noticeable dent in the lack of underrepresented minorities carrying out biomedical and behavioral sciences at the NIH and elsewhere.

But the current leader of the NIH is no slouch when it comes to diversity. Director Francis Collins established the “road map” in the National Human Genome Research Institute (NHGRI) that has yielded modest but significant additions of underrepresented minorities to the genomic research workforce. He even brought in a “mercenary,” Clifton Poodry from the old Minorities Opportunities in Research (MORE) Division, which had as its primary mission increasing minority participation in biomedical and behavioral sciences research. Poodry’s efforts and those of his colleagues at MORE, involving several meetings with diverse stakeholders at major research universities, led to the creation of several successful extramural diversity training programs that provide funding to support minorities underrepresented in biomedical and behavioral sciences research at the pre-baccalaureate and pre-doctoral levels.

The NIH should now apply similar effort to diversifying its own staff. One realistic approach could be to partner with faculty at HBCUs that are within a 2-hour driving radius of the Bethesda campus. Local colleges offer a unique opportunity for NIH researchers to more frequently associate with interested minority faculty and students, thus increasing the “comfort level” that many believe is low between minority trainees and Caucasian research scientists at the NIH. Minority faculty and students from nearby HBCUs will also have a significant opportunity to network with distinguished scientists who visit the NIH as part of the NIH’s flagship seminar series, WALS (Wednesday Afternoon Lecture Series), and other talks and conferences. Recent speakers have included Collins; National Institute of Allergy and Infectious Diseases head Anthony Fauci; and National Cancer Institute Director Harold Varmus, a Nobel Laureate and former NIH director. Encounters with these successful scientists can provide minority students and faculty insight into the path one needs to take to be a successful scientist, something lacking at their home institutions.

In addition to simply exposing minority researchers to the NIH’s top dogs, NIH-HBCU partnerships could serve to generate successful new research programs. For example, as director of the NHGRI, Collins initiated a partnership with the Howard University, an HBCU in Washington, DC. The results was a collaborative genome program that led to involvement of several minority researchers and the later recruitment of Charles Rotimi as an NHGRI Branch Chief—part of the 0.8 percent of African American branch chiefs in the intramural program. While science was at the foundation of the collaboration, it had the added benefit of increasing awareness at Howard of genome research. At the same time, NIH scientists gained exposure to an HBCU.

Since the NIH’s intramural science program is often a complement to the extramural science programs it supports, it’s time to make NIH’s intramural scientific diversity a model. It is not enough to support diversity in science, NIH needs to live it. Role models are needed for young students, and the NIH has an abundance of them who could mentor minority youth at nearby universities. These relationships should also test the limit of the oft-stated hope that “a good mentor does not have to look or sound like you.”

Ed Smith is a Professor of Comparative Genomics and Director of the NIGMS’ Initiative to Maximize Student Development R25 training grant at Virginia Tech. He can be reached at esmith@vt.edu.