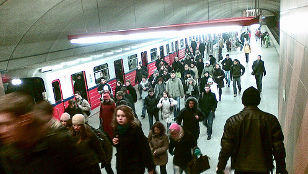 FLICKR, CHDXXIn August 2013 letters to the journals Science and Nature, 22 virologists notified the research community of their intent to develop and research strains of the already deadly H7N9 influenza virus so that it would be transmissible via aerosols among mammals. The wild-type H7N9 strain is not aerosol transmissible among humans and shows only limited respiratory aerosol transmission among ferrets, so the aim is to confer what is known as gain of function by making the virus mammalian transmissible, or mtGOF. H7N9 caused more than 130 human infections, including 43 fatalities, from handling poultry in China. Those infections tapered off last summer but may be picking up again as flu season approaches.

Back in May, scientists in China published experiments describing hybrids of the H5N1 avian flu virus and the 2009 pandemic H1N1 virus that can be transmitted through the air among guinea pigs. The H5N1...

The voluntary moratorium on research that made the deadly H5N1 avian influenza virus contagious in ferrets via respiratory aerosols lifted this January, and research has resumed. These mtGOF flu strains may already be highly contagious in humans.

These examples of mtGOF research may signal the beginning of widespread interest in making dangerous pathogens such as flu viruses contagious in humans via respiratory aerosols.

What is the likelihood that one of these viruses will escape from a laboratory and seed the very pandemic that the researchers claim they are trying to prevent?

Recently, one of us tackled this problem. Lynn Klotz carried out an in-depth analysis of the risk to human life from mtGOF influenza research. The risk analysis determines potential fatalities from an accidental virus release from a lab through a single laboratory-acquired infection (LAI). It follows the infected lab worker through daily activities transmitting the virus to acquaintances and strangers. The full analysis containing the data, assumptions, and mathematical calculations may be accessed at either the Center for Arms Control & Non-Proliferation website or at our Breeding Biosecurity blog. Here we summarize the findings, citing the key numbers that emerged from the analysis.

Klotz assumed the worst-case scenario to be that in which one infected lab worker could infect his spouse or children, friends, coworkers, or strangers, seeding an outbreak that initially is mistaken for the annual flu. By the time a mounting pandemic is recognized, it is too late to be controlled through quarantine or other means. The company Risk Management Solutions, which advises the insurance industry on managing catastrophe risk, has estimated “that as few as 50 geographically diverse cases [of infection] are enough to start a global pandemic.” So, this worst-case scenario is not improbable.

A second scenario has the infected lab worker spreading disease only to strangers during commutes on public transportation. Infected strangers would not be easy to trace for quarantine, so a pandemic is seeded.

How the probabilities and numbers of fatalities are estimated may be found in the full analysis.

The basic probability of release is defined as the probability of release from a single lab in a single year. For the worst-case scenario, fatality burden was found to be 30,000 fatalities per lab per year. For commuter-stranger scenarios, fatality burden ranges from 180 to 1,100 fatalities per lab per year, depending on commuting and contagiousness details. Importantly, these estimates of projected fatalities already are based on the small chance that a pandemic would be seeded, and still the numbers of lives lost could be in the millions.

So just how seriously should we take such estimates of fatality burdens? Certainly no Institutional Review Board assessing human-subjects research would approve a proposal with even the lower 180 projected fatalities per year. The Federal Aviation Administration would never let an airline fly with probabilities of a crash leading to this fatality burden.

Moreover, the fatality burdens of mtGOF research are likely to be considerably greater than this, since the analysis is based on one lab and a single year. As more labs begin mtGOF flu research, the threat of a lab release increases dramatically.

However, because the probability for lab release and the probability of a pandemic probability are both low—together ranging from 0.00018 percent for the most conservative commuter-stranger scenario and to the much higher 0.03 percent for the worst-case scenario—supporters of mtGOF research believe it is safe. Such research would be safe for most pathogens; but for pathogens that could seed a worldwide pandemic with tens of millions of deaths, the probabilities are not nearly low enough to judge the research safe.

Whatever number we are gambling with, it is clearly far too high a risk: so this particular mtGOF research should be banned. And when deemed necessary, it should require the strictest oversight and an even higher biosafety level than the current highest, BSL-4.

We emphasize that we have been considering only a very small subset of pathogen research, perhaps less than 0.1 percent. Most pathogen research should proceed free of unnecessary regulations.

Given the global threat, the United States should insist on discussions leading to an international agreement that would require the strictest oversight to conduct this research anywhere. As it stands, any and all of the world’s nations can carry out this dangerous work without regard to consequences. But were a dangerous strain to escape, the consequences would be shared by all of us.

Lynn Klotz is a senior science fellow at the Center for Arms Control & Non-Proliferation and a research scholar at Arizona State University’s Walter Cronkite School of Journalism and Mass Communication, where Edward Sylvester directs the Science and Medical Journalism program.