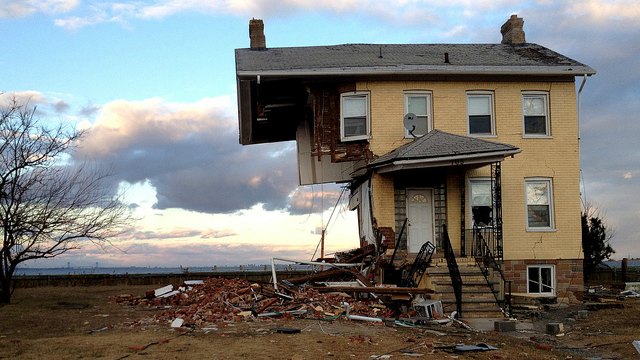 Damage from Hurricane Sandy in Union Beach, New JerseyFLICKR, WAVIANThe ongoing devastation from Hurricane Harvey sadly reminds us of the risks of coastal living. We feel deeply for the communities in Harvey’s path. One of us (Sid Narayan) hails from a coastal city in south India that has seen its fair share of tragedy too, from annual cyclones to the 2004 Asian tsunami. Sid has spent his career as a coastal engineer trying to design solutions to reduce those risks. He has carved a niche as one of the small but growing number of engineers helping to show where natural solutions can contribute cost effectively to risk reduction. As a coastal ecologist, the other author (Mike Beck) has had to run from storms too, including once abandoning his boat and broken trailer in a swampy, roadside ditch in the Florida panhandle.

Over the past four years, our...

Habitat restoration could pay for itself in savings.

In Scientific Reports today (August 31), we report from these industry models that during Hurricane Sandy marshes prevented USD$625 million in direct flood damages across 12 states, and reduced flood levels along several hundreds of kilometers of roadways. Indeed, coastal wetlands reduced property damages by as much as 30 percent in some states.

The study also shows that coastal wetlands provide important coastal protection services every year. In Barnegat Bay in New Jersey, marshes annually reduce flood losses by 16 percent compared to areas where marshes have been destroyed or developed over. In the highest risk areas, that is, those less than five feet above sea level, marshes reduce risks to property by as much as 70 percent.

By working collaboratively with the risk industry, we can better quantify the economic value of natural defenses and increase their relevance in coastal management decisions. Although coastal wetlands can be included in flood models, they are rarely assessed directly by risk modelers, (re)insurers, and brokers; in a large part because their clients don’t ask for it. Our study demonstrates that the risk-reduction role of wetlands can be valued directly by the risk and engineering sectors, and thus more readily considered in coastal development and habitat restoration decisions.

In a connected report from the Lloyd’s Research Foundation, we have identified how the findings in our Scientific Reports paper can be used to fund wetland conservation and restoration. Before a disaster strikes, investments in habitat conservation that reduce coastal risk could reduce premiums on insurance and insurance-linked securities (such as resilience bonds). In other words, habitat restoration could pay for itself in savings.

After a disaster strikes, private insurance and public recovery funds can support wetland conservation for future risk reduction, with the benefits of further reducing insurance premiums and building coastal resilience against future disasters. The risk and insurance industry can play a critical role in wetland restoration for disaster prevention and recovery.

At present, only 3 percent of public and private funding goes to restoring natural infrastructure (for example, wetlands). The rest goes to built infrastructure (such as concrete). Our new study makes a clear case for a reallocation of this coastal investment portfolio, particularly after disasters such as Hurricane Sandy.

We report from these industry models that during Hurricane Sandy marshes prevented USD$625 million in direct flood damages across 12 states.

Together with our colleagues we are currently focused on supporting the communities struggling to make it through Hurricane Harvey. Right now is the time for urgent response and to get people out of harm’s way.

Unfortunately, we can expect that this is not the last we will see of storms like Harvey, Sandy, Wilma, and Katrina on our coastlines. Between development and climate change, coastal risks will only increase. And we must not forget that it is not just US coastal communities at risk from storms, it is countries across the Caribbean and around the world. Over the past year, we have worked with the World Bank and the Philippines government to show that across that nation, mangroves reduce damages to people and property by 25 percent.

By working together with risk modelers, we can now quantify the importance of these habitats for long-term flood reduction. If we are to build coastal resilience, our nations’ natural infrastructure will be critical to that success.

Michael W. Beck is the lead marine scientist at The Nature Conservancy and an adjunct professor at the University of California, Santa Cruz, where Siddharth Narayan is a postdoc.