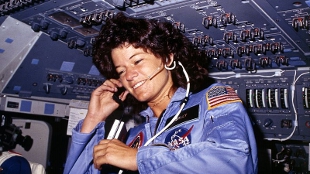 Sally RideWIKIMEDIA, NATIONAL ARCHIVES AND RECORDS ADMINISTRATIONThroughout history, women have achieved tremendous accomplishments in the traditionally male-dominated fields of science, technology, engineering, and math—commonly referred to as the STEM fields. We have worked on the Manhattan Project, contributed to human understanding of DNA, discovered radium, and helped design and build the Golden Gate Bridge, just to name a few accomplishments. In addition to mastering difficult subjects and techniques of experimentation, as women, we also had to overcome the bias against our participation in the STEM disciplines, which have limited our opportunities. Although these obstacles are less overt today, bias still remains.

It wasn’t long ago that women were denied the opportunities we are today able to enjoy in science and the other STEM fields. In fact, up through the 1960s, it was common to see job listings for positions like engineers or college science professors that read,...

Before women were widely accepted into higher education, men pursued degrees in, and predominantly held the jobs that required those degrees.  Working toward gender equality in higher education opened the doors for women to get an education, but not a job. The educational acts of the 1970s were really just the beginning of the bigger push to give women equal opportunities in the workforce. Progress takes time.

Thankfully, we don’t see the same degree of blatant gender discrimination today, but we’re far from a place of gender balance or equality in the sciences or the STEM fields, which remain male-dominated. My belief is that there is no legitimate excuse for anyone, male or female, to not be allowed to follow his or her passions in life because of gender. With the right support especially early on, girls can thrive in science and STEM.

Accomplished leaders, such as the recently departed Sally Ride, have made huge strides for women in the science fields. In 1983, Ride was the first United States woman in space. It was her space shuttle mission that showed women that they could break barriers and enter science-related fields. She opened doors for more young girls to pursue STEM with confidence and really helped unlock the brilliance of a generation of women.

Another female high achiever in a STEM field is Lisa Jackson. She was appointed by President Barack Obama as the current head of the Environmental Protection Agency. This amazing woman earned a masters degree in chemical engineering and is the proud mother of two. Her science-based focus, priorities and accomplishments as an administrator serve as inspiration to women in the science fields that they too can change the world. These women have inspired countless others by their example.

These days, more and more women have elected to pursue a career as well as nurture a strong family life. Women who choose to follow careers in STEM disciplines face unique and frustrating challenges. Even after we establish ourselves in our careers, we continue to encounter potential career-ending traps. Women in STEM careers have higher attrition rates than do their male counterparts—especially within the first ten years on the job—we also have higher attrition rates than women in other careers. The general belief that men outperform women in math and science fields is one of the reasons for the high attrition rate. Other reasons include cognitive gender differences, a woman’s lack of interest in the STEM fields, work-life balance issues, and bias—all important factors to acknowledge and correct. If we want to attract the best and brightest minds into the fields that will move us forward, we can no longer look to only half of the population.

Many of us who opt to follow careers in math and science know that bias continues well after we complete our schooling. By maintaining certain fields as male-dominated, we are also allowing the culture within those fields to be established and maintained by men. Therefore, the males in math- and science-related institutions and workplaces will continue to foster cultures that only meet the needs of men. These male-oriented cultures are not inviting to women, and as a result, they deter young women—even those with exceptional abilities—from choosing fields in math and science. Because of lingering gender stereotypes in the workplace, there still tend to be preconceived notions that women cannot handle leadership roles within STEM disciplines as well as men.

According to the US Census Bureau, in 2009 among adults twenty-five and older, 29 percent of women had at least a bachelor’s degree compared with 30 percent of men.  Yet, women typically earn 20 percent less than their male counterparts in the STEM fields.  Also, women only make up approximately 10 percent of the population in the engineering fields.  The system is broken and needs to be fixed.

The fix starts with exposure to the STEM fields at a young age. Young adults are inquisitive and may end up in STEM fields for a variety of reasons, and early exposure to these fields would result in more informed and more precise decisions when selecting a college or university and a particular course of study. More than that, it would help young women understand that their gender shouldn’t determine the career path they choose and that pursuing a STEM career doesn’t make them any less feminine.

Once in a STEM career, women and men can act as mentors.  The significance of mentorship is undeniably important if we are to bring more women into STEM.  Women need strong, professional, and positive influences, so share your expertise, experience, and guidance.  An optimistic and confident mentor can have a huge impact on someone’s life.

Karen Purcell, P.E., is the founder and president of PK Electrical, an electrical engineering, design, and consulting firm in Reno, Nevada. She is the author of Unlocking Your Brilliance: Smart Strategies for Women to Thrive in Science, Technology, Engineering, and Math.