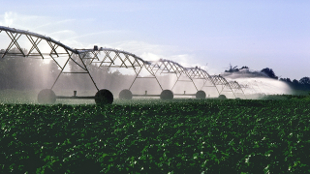 WIKIMEDIA, SAPERAUDWater security is one of the biggest challenges of the 21st century, touching nearly every country on every continent. A 2009 study of water and food issues in Asia by the UN Food and Agriculture Organization (FAO) and the International Water Management Institute (IWMI) found that without dramatic improvements in irrigation, many high-population Asian nations will lack one-quarter of the grain they need to feed their people by 2050.  Drought remains the number-one threat to food supply in developing countries, particularly in Africa and Asia, and has caused more deaths than any other natural disaster in the last century.  To draw attention to this crucial issue, the United Nations has declared 2013 to be the International Year of Water Cooperation, and earlier this year Reed Elsevier (Elsevier’s parent company) announced that, for the third year in a row, it would be awarding $75,000 for projects that...

Water scarcity is both a natural and human-made phenomenon. There is enough freshwater on the planet to ensure access to clean water for everyone, but it is distributed unevenly and too much of it is wasted, polluted, or unsustainably managed.   Since the flow of water respects no boundaries, related problems are often international in scope, but solutions tend to be implemented on a local level with limited coordination between the various stakeholders to optimize effectiveness.

The criticality of water and food research is undeniable; at stake is the ability of nations to feed themselves. The FAO estimates that by 2050, the world must grow enough food to support an additional 2.7 billion people—and it must do so with less water.

While the daily drinking water requirement per person is 2 to 4 liters, it takes 2,000 to 5,000 liters to produce one person’s daily food. About 20 percent of the world’s cropland is irrigated; the rest is watered by rainfall only.  Irrigation supports 40 percent of all food production, typically increasing most crop yields by 100 to 400 percent, but more efficient systems must be developed to optimize water use and improve quality through better recycling and reduced pollution.

Minimizing waste is particularly crucial.  A recent report issued by the Institution of Mechanical Engineers in the United Kingdom estimated global food production at about 4 billion metric tons annually, but due to poor practices in harvesting, storage, and transportation, more than a third does not get consumed.  Moreover, the large amounts of land, water, fertilizers, and energy required to produce this food, is inefficiently managed.   As food production remains the dominant global water user, more effective management of water in this context will have the greatest impact.  Reducing loss and waste of food alone could save billions of dollars and trillions of liters of water.

Achieving better water management on a global scale will require dedicated investment in research to develop more accurate prediction models that will drive action, as well as improved communication between policy makers and researchers, who need to provide clear recommendations on how to implement solutions. As a 2012 UN report on global water management stated, “Even when the appropriate knowledge is available, it does not always get readily disseminated and shared—and translated into proper planning or effective action.”

Christiane Barranguet, PhD, is an executive publisher of Physical Sciences, STM journals, a division of Elsevier, where she helps shape the publication policy relating to water management and biological resources.  In this role she provides perspective on the global trends in water research, related funding, and implications for the future.