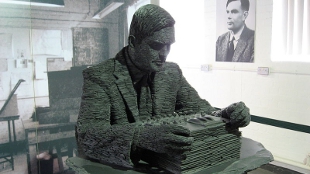 A slate statue of Alan Turing in slate at Bletchley Park. The photograph on the wall in the background is also of Turing. Wikimedia, Jon CallasDuring World War II, Alan Turing and his Bletchley Park colleagues devoted countless hours to using rigorous deductive reasoning to decipher the military code associated with the Enigma machine.  Their eventual success in cracking the German code allowed the Allies to eavesdrop on Nazi military communications, thereby changing the course of the war.

If they explicitly think about types of reasoning at all, biomedical scientists may subscribe to the view that deductive logic is primarily of value in mathematics. In this centenary year of his birth, it is appropriate to reflect on Turing’s profound and influential contributions, often dominated by deductive reasoning, not only to mathematical logic, but also to cryptography, computer science, and theoretical biology—and their relevance to the biomedical research enterprise.

Even though all deductive conclusions are logically implicit in the premises, they are not necessarily obvious, and they can require immense intellectual effort to generate. For example, in order to successfully decipher encrypted Nazi dispatches, Turing and his WWII colleagues had to make virtually every deductive inference permitted by the information in hand, what I call “maximum deduction.” As an ideal, maximum deduction is of potential relevance to today’s biomedical researchers, as deeper reasoning could help avoid fruitless lines of investigation while pointing to previously unrecognized but potentially valuable experiments. But as cognition expert Daniel Kahneman recently noted, rigorous reasoning is energy-intensive and the default choice for many individuals is to minimize cognitive effort.  Biomedical investigators frequently fail to make all of the inferences that are possible with the data available to them, whether derived from their own investigations or from studies by others.

Consider the phenomenon of antibody-mediated neutralization of viruses, which involves interactions between three entities: antibody, virus-encoded protein or glycoprotein, and host cell receptors.  Most viral immunologists have assumed that viruses escaping neutralization evolved substitutions that reduced the antibody’s ability to bind to the relevant virus epitope. However, a rigorous deductive analysis suggests another possibility: because the neutralization of a virus depends on the competition between antibody and host cell receptor for binding to the virion surface protein, we can infer that either weaker antibody binding or stronger receptor binding by the virus would accomplish the same result. Evidence for this latter possibility has recently been obtained in studies on antibody-mediated neutralization of influenza A viruses.

Another illustrative example is provided by Daniel Koshland’s account of how he was led to propose the adaptive fit concept for enzyme-substrate interaction, now known to be an important aspect of functioning for many proteins.  Koshland recognized the implication of the competition for the enzyme active site between substrate and solvent molecules. For the enzyme he was studying, hexokinase, water was in vast molar excess to the substrate, glucose, so there had to be a mechanism by which the enzyme would greatly “prefer” to act on glucose.  This mechanism, he discovered, was that glucose, but not water, could induce a conformational adjustment in the hexokinase active site permitting the key catalytic groups to attain the spatial positions essential for enzymatic activity. The relevant facts were available to all biochemists, but only Koshland pursued these key inferences.

Deductive arguments also contribute enormously to the evaluation of claims made in or about biomedical research studies. For example, the recent findings on the functional relevance of vast stretches of non-coding DNA in the human genome should not be regarded as a huge surprise, as some have claimed.  Given the inevitability that DNA sequences will be lost due to the ever-present possibility of deletion when they are not contributing to fitness, it would be inexplicable that large numbers of organisms would indefinitely bear the energetic costs of replicating putatively useless DNA sequences comprising up to 98 percent of their genomes.

One could argue that the immediately preceding argument is probabilistic and not purely deductive, but it embodies a truly deductive pattern of thought at its core.  I suspect that a scientist’s capacity for quasi-deductive reasoning, what could be called neurological deduction, is correlated with that individual’s aptitude for logical deduction.

A last crucial area in which deductive forms of logic have had a major impact on biomedical research is in computational biology.  The sophisticated algorithms involved in analyzing high-volume DNA sequence data and other sorts of data generated using high-throughput technologies rely fundamentally on deductive logic as embodied in software.  Thus, the conceptual innovations driven by Turing and others are already influencing biomedical science. This legacy alone should provide sufficient reason for researchers to recall and appreciate Turing’s life and achievements—and to apply Turing’s sort of rigorous logic to their own work.