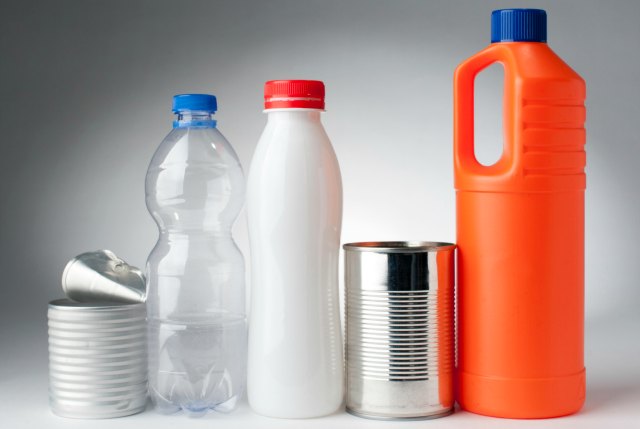 ISTOCK, MATTEODESTAFANOHormones—chemical messengers secreted by internal (endocrine) glands to control body functions—were discovered as the 20th century began, launching the field of endocrinology. Within a few decades, several natural steroids including the sex hormones estrogen, progesterone, and testosterone had been identified. But since the 1930s, we have been increasingly exposed to many endocrine disruptors—artificial organic substances that mimic natural hormones and can threaten human health.

Although the U.S. has been slow to control endocrine disruptors, pressure is mounting for legislators to make significant regulatory changes in Europe, although the European Commission has also dragged its feet. In December 2015, the European Union’s Court of Justice decreed that the Commission had breached EU law by failing to adopt scientific criteria for identifying and regulating endocrine disruptors. The European Parliament met in February 2017 to consider a proposal defining those criteria, but member states decided to postpone a decision. France...

The challenge to developing appropriate regulations for endocrine disruptors is that evidence from epidemiology for health effects is indirect and difficult to collect. Cancers abound in modern industrialized societies. Environmental factors are surely involved, yet hard to pinpoint. It took three decades to establish that DDT (dichloro-diphenyl-trichloroethane) and DES (diethylstilbestrol) impair health. Both are now strictly controlled, but their effects persist across generations. 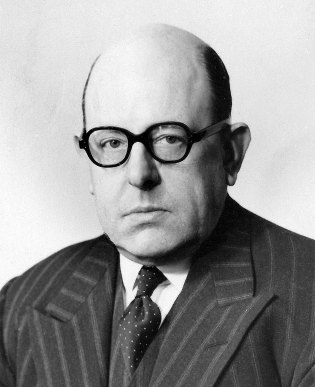 In the 1930s, British biochemist Edward “Charles” Dodds began a systematic search for organic chemicals with estrogen-like effects. Mass production of natural hormones was uneconomical, so Dodds sought cheap alternatives. For his experiments, he surgically removed the ovaries of female rats to inactivate their reproductive systems. Any injected substance that restored cell division in the womb and vagina, increasing their weight, necessarily had estrogen-like properties.

All natural steroids have a basic core of four carbon rings, once regarded as essential for any compound to act like an estrogen. But the Dodds team identified many estrogen mimics with three, two, or even just one carbon ring. Early examples with two rings were the bisphenols, a dozen compounds that stimulated cell division in wombs and vaginas to different degrees. But Dodds and colleagues soon switched attention to diethylstilbestrol (DES), a newly synthesized chemical with far greater potency. Ominously, they found that many estrogen-mimicking substances also disrupted reproduction in laboratory rats and rabbits whose reproductive systems were intact.

In parallel, other chemists were developing new organic pesticides. The discovery of DDT, which played a pivotal role in controlling disease-carrying insects during the second half of WWII, was hailed as a breakthrough. After 1945, DDT also became widely used as an agricultural pesticide. Yet, evidence for serious effects on both wildlife and human health soon accumulated. DDT, an organic substance with two carbon rings like BPA, has some estrogen-like effects and was one of the first endocrine disruptors to be recognized. In 1962, Rachel Carson’s best-seller Silent Spring crystalized mounting concerns, galvanizing environmentalism. Tragically, Carson herself died from breast cancer in 1964 when she was only 56, but her legacy, the Environmental Protection Agency (EPA), was founded six years later.

The EPA banned agricultural use of DDT in the USA in 1972, and worldwide prohibition eventually followed in 2004. In the meantime, DDT has been implicated in reproductive cancers, miscarriages, low birth weight, and male infertility. Alarmingly, very small doses during pregnancy are veritable time bombs. Major effects on fetal development first emerge years after maternal exposure to standard doses. For instance, the risk of breast cancer is almost quadrupled in daughters after puberty.

Surely, 45 years on, such health threats should be history? Not so.

As with DDT, evidence mounted that DES caused problems in human reproduction. A crucial development came in 1971: An otherwise extremely rare vaginal cancer of aging women had been found repeatedly in young women—“DES daughters”—whose mothers had received the drug during pregnancy. Later that year, the FDA at last advised doctors to stop prescribing DES during pregnancy. By then, at least 3 million pregnancies had been affected in the U.S. alone.

The prescription of DES for pregnant mothers ceased in the U.S. after 1971. Agricultural use of DDT was banned a year later. Surely, 45 years on, such health threats should be history? Not so. Because both DES and DDT disrupt fetal development, effects persist today, and disturbing experimental evidence from laboratory rodents indicates that further generations may be afflicted. Moreover, other estrogen mimics are now rife. BPA, whose estrogen-like effects were reported 80 years ago by the Dodds group, is a prominent example. It is used to make polycarbonate plastics for packaging food and drink, and epoxy resins, which commonly coat the insides of cans and copper water pipes. Many other everyday items such as DVDs, sunglasses, and medical devices also contain BPA. Almost universally present in human blood and urine in industrialized countries, BPA is just one example. Others are polychlorinated biphenyls (PCBs) and phthalates. 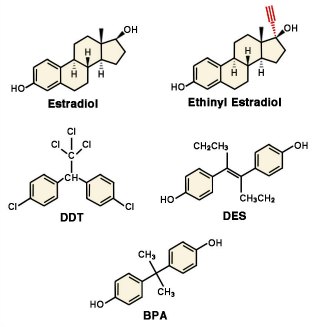 ROBERT MARTINCompared to adults, BPA exposure is doubled for children generally and 10 times greater for babies in intensive care units. The use of BPA for baby bottles, now retired by many manufacturers, is a prime cause for concern. In one notable experiment, 77 Harvard University student volunteers drank cold liquids from polycarbonate bottles for just one week and their urinary BPA levels rose by more than two thirds. At least for baby bottles, several nations—including the U.S., but only since 2012—have officially recognized BPA’s potential toxic effects.

Extensive work on laboratory rodents by pioneers such as Frederick vom Saal, Ana Soto, and Carlos Sonnenschein revealed major effects of BPA on reproductive function in both sexes. The most alarming changes occurred with low doses during fetal development. Other studies also yielded evidence that BPA adversely affects human reproduction. In 2011, epidemiologist De-Kun Li and colleagues directly compared semen quality with urinary BPA levels in more than 200 men working in factories in China, some with levels 50 times above baseline. Increasing urinary BPA was significantly associated with decreasing semen quality.

Many studies have linked BPA and other endocrine disruptors to increasing infertility and higher rates of reproductive cancers in both men and women. Although human evidence is largely circumstantial, it is substantiated by laboratory experiments on rodents and primates.

But what about estrogen surrogates used in contraceptive pills? Worrying reports some years ago suggested that they might increase the risk of breast cancer. However, careful study showed that use of contraceptive pills is actually associated with earlier detection and hence, beneficial. The main estrogen substitute used, ethinyl estradiol, has a basic core of four carbon rings and is structurally very close to the natural hormone estradiol. So perhaps endocrine disruptors cause problems because they have fewer carbon rings. By chance, they trigger estrogen receptors on cell surfaces, but the structural differences are harmful. This is a key aspect that needs targeted research going forward.

Unfortunately, current political initiatives in Congress aim to curtail the EPA. Proposals for new legislation range from specific initiatives that include cessation of monitoring of endocrine disruptors to complete closure of the agency. The EPA is the primary bastion protecting the public against environmental toxins, and has been fighting an uphill battle. The persistent toxic cocktail of endocrine disruptors in the environment shows just how far we still have to go to achieve effective control. What is needed is more research and more regulation, not a return to the bad old days when DDT and DES were allowed to run rampant.

Robert Martin is Curator Emeritus at the Field Museum in Chicago and an adjunct professor at the University of Chicago. He has conducted extensive research into primate evolution and reproductive biology, and is the author of How We Do It: The Evolution and Future of Human Reproduction. Background research for this opinion piece was accomplished during a resident fellowship at the Stellenbosch Institute for Advanced Study.