Researchers at the University of Tokyo showed that jawless sea lampreys use a specific immune response mechanism involving "copy choice" that creates variable lymphocyte receptors (VLRs). This mechanism differs from the system in most vertebrates, which involves somatic recombination producing immunoglobulin receptors.

"This species has such an evolutionarily interesting position," says Faculty of 1000 member Joachim Kurtz at the Institute for Advanced Study in Berlin. "It's not an invertebrate but more primitive than a jawed fish, it's somewhere in between."

In this mechanism that generates diverse immunological receptors, only a portion of the germ line is copied into the rearranged VLR, yielding one antigen response gene per lymphocyte. The more common vertebrate mechanism involves a complex recombination and deletion process, whereas a third mechanism, found in invertebrates, involves alternative splicing of the genome.

"What fascinates me is there seems to be evolutionary constraint on the [immune] system that leads... 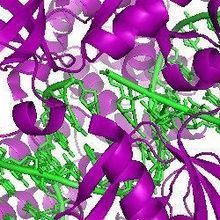